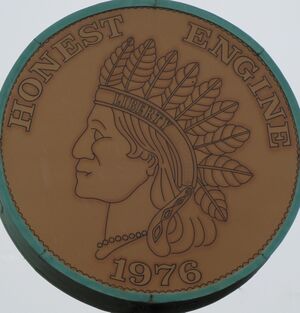 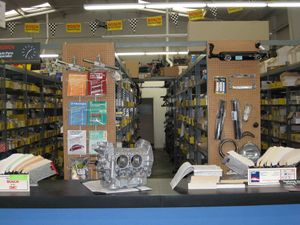 The Honest Engine parts store. Notice only 50% of the lights are being utilized (FIG. 1)

The Redwood Coast Energy Authority (RCEA) is an organization that improves energy efficiency and reduces the use of energy at businesses in Humboldt County, CA. One of the businesses that RCEA has worked with is Honest Engine in Eureka, California. RCEA a not for profit company and is funded through government grants and a 2-year contract with Pacific Gas and Electric Company.

Honest Engine is an automobile service shop in California and has been operating since 1976. Honest Engine is unique in that it is both a repair shop and a parts store. Honest Engine supplies a variety of parts (FIG. 1) and services to all automobiles, however they specialize in foreign manufactured vehicles. Bob Neely owns and operates the Honest Engine branch in Eureka. The Eureka Honest Engine location consists of an approximately 15 by 24 meter parts store and the 12 by 30 meter garage (FIG. 2). Honest Engine also has a warehouse on their property which is included on the energy bill. The warehouse was leased out to and used by the DHL shipping company until 2008. All of this area totals 4,267 square meters and all energy use is compiled on one bill (including the warehouse). 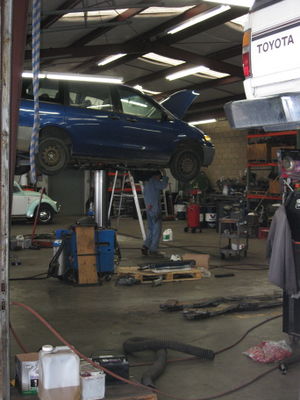 The Honest Engine mechanic shop. Notice the skylight in the background as well as the RCEA retrofitted T 10 Flourescent Lighting (FIG. 2)

Honest Engine's motivation for the lighting upgrade was driven by the desire to utilize a more energy efficient and therefore environmentally sustainable system. In addition, the extra money saved as a direct result of the efficiency is also a helpful incentive from a business perspective. Honest Engine understands that there is an environmental impact that the company has by the nature of their business. Due to their combined effort with RCEA, Honest Engine is able to reduce its carbon footprint while also saving money. Electricity is the biggest bill Honest Engine has month to month mainly because of the lifts, drills, lights and air compressor used to keep a service shop running. Honest Engine's largest single consumer of electricity is their industrial air compressor, which is essential to the nature of running an automobile repair shop. The compressor is expensive from an electricity standpoint and retrofitting something small like the fluorescent lights in FIG. 3, makes their electricity bill much more affordable.

RCEA retrofitted the following items on site at Honest Engine: 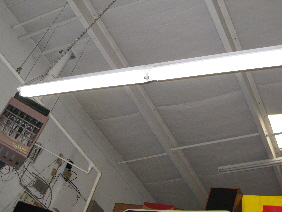 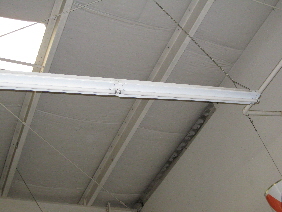 Example of Honest Engine keeping every other Light off to conserve energy (FIG. 4) 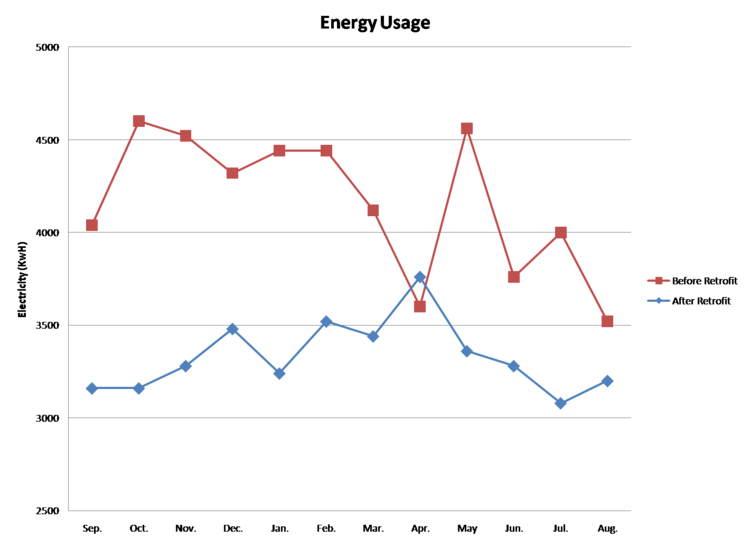 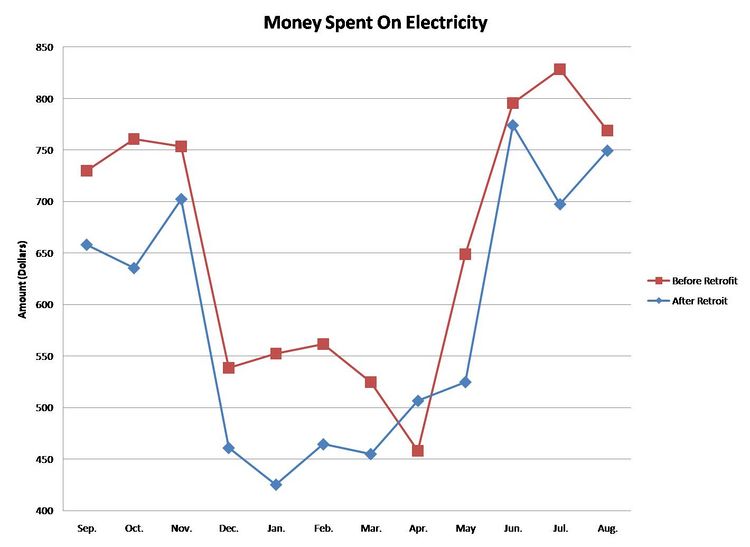 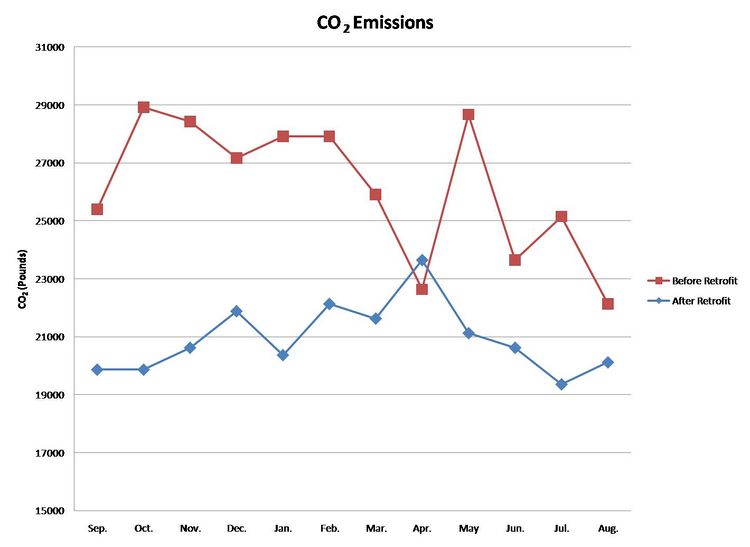 Results of The Retrofit[edit | edit source] 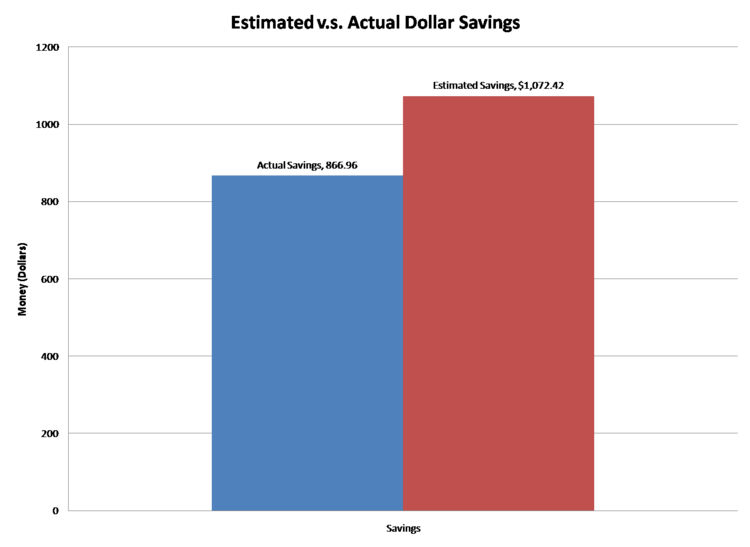 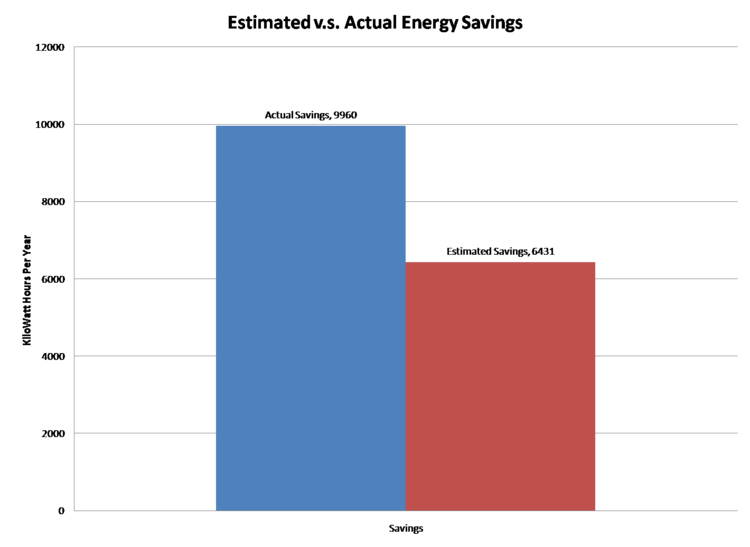 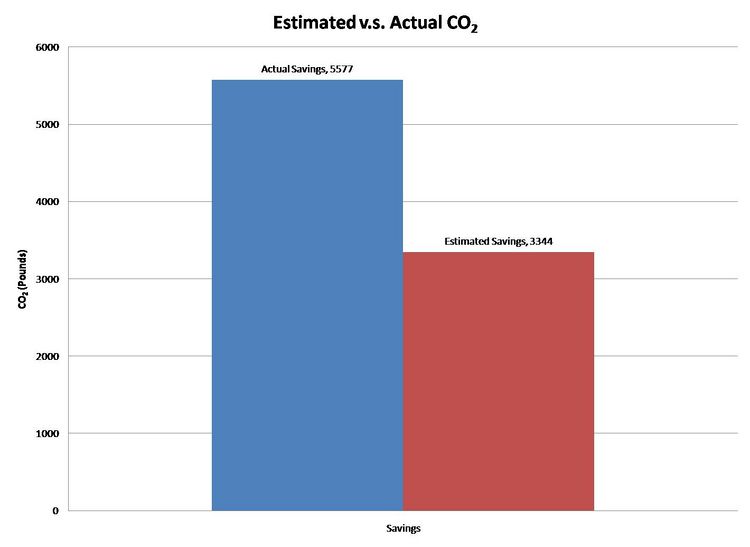 Working with RCEA motivated Honest Engine to continue build habits which make efforts to save energy. The RCEA retrofits revealed to them how large of an effect the efficiency changes can make. Honest Engine also now understands that the way one uses electricity can have a greater effect than the efficiency of the systems in question. These are some of the changes that Honest Engine has made to augment their energy efficiency:

The collaboration between RCEA and Honest Engine had a positive effect toward Honest Engine which caused Honest Engine to think of future improvements to the efficiency. If Honest Engine were to implement more retrofits, it was mentioned that they would attempt to replace their natural gas powered heaters with an undecided more efficient system. This would most likely have a sizable effect on the saving earned per month on their gas bills. Honest Engine had also expressed an aspiration to implement a photovoltaic system on future Honest Engine locations. The installment of a photovoltaic system would inarguably have an effect on the savings made due to the fact that they would be generating some if not all their own electricity and would be less dependent on the resources provided by the Pacific Gas and Electric Company.

Based off of an interview with Bob Neely, The Eureka Honest Engine location has been satisfied with the work that RCEA has done for them. Mr. Neely mentioned that RCEA "got in, did their job, and got out"[2] and that they were "very efficient" in how they proceeded to complete their task. When Honest Engine was questioned as to whether or not they would have completed the lighting upgrade without the assistance of RCEA, they said "maybe eventually," but definitely not in the time period that RCEA accomplished it in. Honest Engine's satisfaction is revealed by the energy saved and the money saved from the retrofit. As mentioned above, 9,960 kwH/year kilowatt hours per year and $866.96 per year have been saved, which is accommodating to Honest Engine's business needs. RCEA's work put Honest Engine in a good situation where they could save money which they are grateful for.