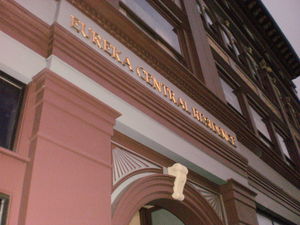 In late August of 2008 Eureka Central Residence, a low income housing complex located in Eureka, CA, underwent a lighting retrofit. This retrofit was in response to an offer made by the Redwood Coast Energy Authority, or RCEA. Their offer consisted of financial support, as well as contracting the labor towards a lighting retrofit, if Eureka Central Residence would be willing to undergo the transformation.[1] The offer was accepted and the retrofits were made. Later, in the fall of 2009, the RCEA approached the Engineering 115 class of Cal Poly Humboldt. In an attempt to determine whether their previous projected cost, energy, and Carbon Dioxide savings for Eureka Central Residence had been met by the retrofit. 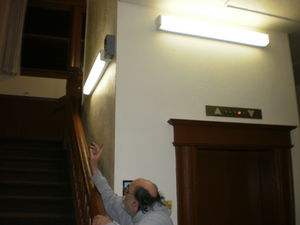 Inside the building. The manager Rich Corell is showing my partner and I the lights that were retrofitted.

The Retrofit of the Eureka Central Residence complex consisted of the replacement of lights throughout the entire building. Five floors of hallway and stair lights were replaced, along with all the lights in the complex's recreation room. Over 150 lights were replaced total. The lights, ballasts and fixtures were all replaced from the complex's previously high energy fluorescent lights, to a low energy, low impact lighting system. The lighting in the residents' rooms however, were not replaced. The retrofit took place in late August of 2008, by a contractor hired by the RCEA and took a total of 2 days to complete.[2] The retrofit, after financial support from the RCEA, cost Eureka Central Residence roughly $2,045.[1]

The people of Eureka Central Residence agreed to the RCEA's retrofit offer in order to save money, as well as minimize their environmental impact. From a business standpoint, the retrofit saves the business money which can be reinvested back into the building, improving other aspects of the business. From an environmental standpoint, the complex has a history of welcoming any technologies that might offer a reduction in their environmental impact. Prior to the retrofit, Eureka Central Residence had a number of environmental policies in place, such as: an extensive recycling program offered to the complex's residence and a bulb replacement policy, in which any resident needing a replacement bulb for their room was supplied with a low energy, low impact replacement. The business is also in the planning stages of adding solar to their roof, to be used for heating and energy.[2] 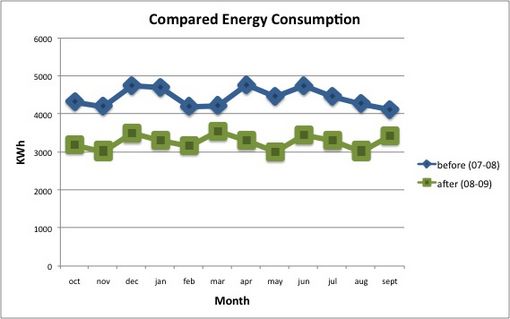 Figure 1. A comparison of energy consumption before and after the lighting retrofit. 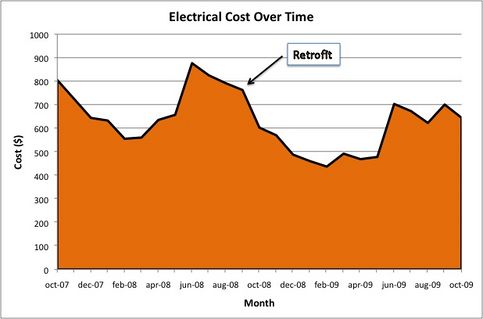 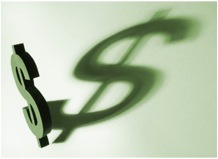 The business would not have retrofitted their lights without the RCEA's offer. While they welcomed the retrofit, Eureka Central Residence was not actively aware of the possibility.[2]This shows the effectiveness of the RCEA's efforts because many businesses welcome the savings of both money and the environment but are not necessarily aware, or searching for such possibilities.

Following the retrofit, the people of Eureka Central Residence continued their previous energy habits. There was no thought given to changing habits, according to the manager. These continued habits included, most hallway lighting being kept on 24 hours a day. Stairway lights however, are set on timers.[2]

The business' overall experience in dealing with the RCEA was satisfactory and pleasant. The RCEA's offer was welcomed and the retrofit was carried out professionally and timely. The hired contractor completed the retrofit of over 150 lights in 2 days. The manager remembers hardly noticing the contractors 'work in progress'.[2]

Eureka Central Residence would welcome future retrofits were they offered to the business. The manager of the complex describes the business as being a willing participant in such endeavors. He believes that moving with technology keeps one's business efficient and up to date.[2]