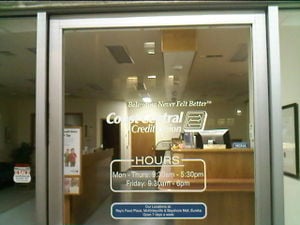 The Coast Central Credit Union is a financial institution in Eureka and the surrounding with 19 ATMS and 11 member service branches throughout Humboldt County. The Eureka branch worked with Redwood Coast Energy Authority (RCEA) in getting light retrofits for the building, which over time saved money and CO2 emissions.[1]

The Redwood Coast Energy Authority's mission statement taken from their webpage says: "The Redwood Coast Energy Authority's (RCEA) purpose is to develop and implement sustainable energy initiatives that reduce energy demand, increase energy efficiency, and advance the use of clean resources available in the region". The RCEA currently has projects to reduce local businesses' energy consumption in Northern Humboldt County. In April 2008 RCEA worked with the Coast Central Credit Union and replaced 31 fluorescent bulbs in the Eureka branch.[2]

In April 2008 the RCEA retrofitted the Coast Central Credit Union's (CCCU) office space lighting. RCEA replaced the existing lights with brighter and more energy efficient light fixtures in the office. The RCEA replaced 31 T12 light bulbs with 31 T8 lights- 26 in the main lobby and 5 in office spaces. Four of the T12s in the lobby were eight foot bulbs which were replaced with eight foot T8s. Three HL port flood lamps were replaced with three 19 watt Compact Fluorescent Light Bulbs (CFL).

The RCEA estimated that the Coast Central Credit Union would benefit in the following ways:

According to the site manager, Gerry Davis, after the retrofit the light quality has improved in the lobby and office spaces. "The retrofit was a great success! The new lights are wonderful, now it is always bright enough in the office" commented Davis. At the office they are pleased with the new lights because the older lights they had been using "were not bright enough at times" and now they can always "easily work under bright new lights," says Gerry Davis. Light use habits did not change after the retrofit was made. The lights are turned on from 9-5 and during that time the employees are more content with the lights than prior to the retrofit.

Look at the Difference[edit | edit source]

Table 1 shows the results a year after the lighting retrofit.

Using the RCEA's average price per kWh of $0.17 and multiplying it to the amount of kWh, Coast Central Credit Union saved $1,367/year and $114 a month, which is a greater savings from the projected RCEA estimates. At this rate of saving it will only take 11 months for the Coast Central Credit Union to make back the money invested into new light fixtures. (Total cost of the retrofit/monthly savings=Time to break even~$1,256.33/$114/month=11 months) 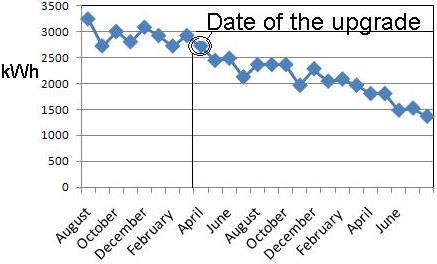 If you would like to learn more about Compact Fluorescent Lightbulbs: EnergyStar.gov