A pure substance is one that is homogeneous (i.e., it has the same chemical composition throughout the substance), and it can exist in three phases (gas, liquid, and solid). Properties of pure substances can help in understanding thermodynamic principles.

Common properties of pure substances include: temperature, pressure, volume, mass, density, specific volume, energy, enthalpy, and entropy. These properties can be categorized as either extensive or intensive. An intensive property is one which does not depend on the size of the system. Temperature is an example. Extensive properties are those which do depend on the size of the system. Examples include mass and volume. 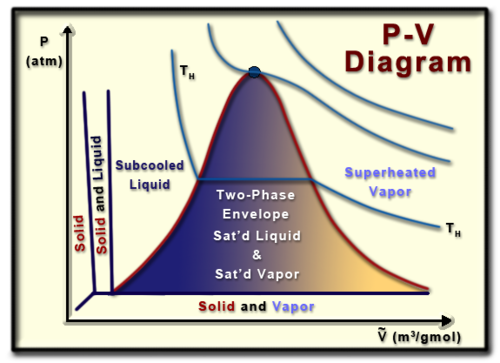 Quality can never exceed 100%. In the two-phase envelope it is important to realize that temperature and pressure are dependent. When determining a substance's state, pressure and temperature cannot be specified concurrently.

For pure substances there are a few important equations which can be understood from the P-v graph, or its variation in a T-v (temperature-volume), P-T (pressure-temperature) graph, and so on.

specific volume can be defined as: 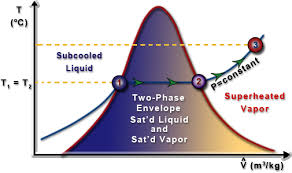 A T-v diagram demonstrates the relationship of a pure substance between temperature and volume. The curves on this diagram are isobars, or lines of constant pressure. Under the two phase envelope, although the substance has some sort of quality the molar volume of a saturated vapor or liquid at a certain pressure can be read straight off the graph. That is, the properties of saturated liquids and saturated vapors are independent of quality. 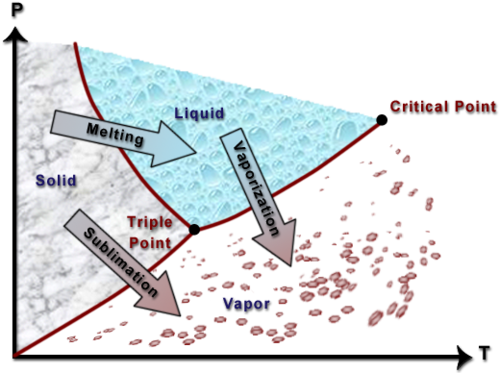 A P-T diagram shows the relationship of a pure substance between pressure and temperature. This diagram displays the properties of a substance that expands upon freezing (such as water).

As can be noted from this diagram, the liquid exists at a pressure above the vapor (the vapor pressure). As such the liquid can be referred to as a compressed liquid. Following the arrows on the diagram demonstrates what needs to be done in order for a phase change to occur. For instance, let's say you had water existing in the middle of the solid range. If you kept pressure constant and solely raised the temperature, the solid would melt into a liquid. Likewise, for most of the liquid region if pressure was decreased while temperature was kept constant, the liquid would vaporize into a gas.

All of the information on this page comes from www.learnthermo.com and from "Thermodynamics for Engineers, second edition"