This page is for planning a VIRTUAL FOREST CONFLICT SITES project demo for Promoting Changes exhibition in Tampere 2010.

Report of the exhibition[edit | edit source]

Things that worked and didn't work in the Promoting Changes exhibition:

Info about the exhibition: http://tamk-artmedia.blogspot.com/2010/04/promoting-changes-exhibition-to-inter.html

Mikko to write to LL and arrange details. Idea will be to talk about the forest conflict sites and commonalities between them. So that if a new person turned up to a conflict they could take action. So we would look at the emphasis of young people (that want to take action) and professional activists (that want to research a conflict properly before taking action).

Mikko to ask people to bring images and maybe short clips for discussion creation of heads up boards (HUBs) in second life.

STILL to do: virtual protest

Topics: Experiences of forest conflicts, examples of used methods and strategies in the campaings and brainstorming how these could be applied in Second Life. 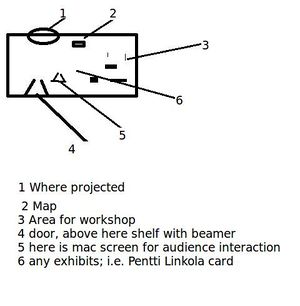 Arrangement in the room:

Eqt - 1 PC projecting, 1 PC to connect to projector; 1 PC for use of audience, large screen for them to see it.

How to Interact with Second Life

Second Life is a virtual world created by Linden Labs. You can enter it in the form of an Avatar.

Your avatar can travel around, talk with others, move objects and do what you want.

Have a go and wander around the forest.

Here is a representation of the world – a map.

How do they compare?

What kind of reality does the map show? How can you interact with it?

Please write your comments, thoughts, pictures on YOUR world.

Its good if you can write about Forests;

Feel free to attach objects, pictures and be creative.

== Closing: 30th of May == (NOW extended till Mid June so that Dortmund curators can see it)

What is nature, natural wood?

Whithout the influence of men?

We … with artifical technics

problem: it looks to phantasylike

roleplay in the virtual world in summer time

commitment when sth happens, generally you are alone; placing artifacts in a right way to study them in your own time, burned fireplaces, who has been there?, how many people?, trunks of forest cuttings

examine, information, being inspector, objects can speak to you, trying how it feels to wear costumes, use machines, sitting in a harvester cabin

training field of activist, also makes some claims, provocated like in theater

you are always in someones land, yard

related to forest experience, ownership, that you shouldn't be there

media in second life, in the real conflict

in exhibition be precise, claiming responsibility

goal: in summer we are going this first roleplay in second life; this first exhibition could start this process

nordic wood as a kind of stage, set for the play

keep the link to the actual Nordic spot

workshop: possible scenes, places, models of the actors, who, how are they related to one another, to the issue, ask participants for it; skript writing

do you have any experience of forest conflict, forest itself?

What is already usable in second life?

Using terms of roleplay / theater for explanation how to find and take part: because they know them

Are you happy with it, would you like to have another one?

Need to discuss, describe what they have seen, express feelings

What was new in the movie, shocking

Relationship to the subject

Map of different kinds of players, issues, get some kind of a picture of the conflict

Who should be invited to meetings, how to proceed effectively? To make it open what we are doing. Information.

Page data
Retrieved from "https://www.appropedia.org/w/index.php?title=Dortmund_2010_Forest_Conflict/Promoting_Changes&oldid=668757"
Cookies help us deliver our services. By using our services, you agree to our use of cookies.
Category:
Maintenance categories:
About Appropedia · Policies · Contact · Content is available under CC-BY-SA-4.0 unless otherwise noted.