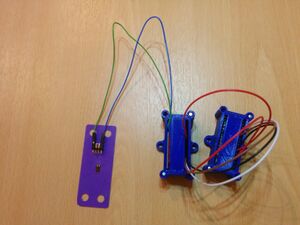 Create a method to print a flexible base for a strain gage, radically reducing the cost of structural measurements.

Strain gages are used to measure stress and deformation of steel structures. They are accurate, costly and hard to install correctly. They are also limited to steel as they come with a plethora of inherent expectations about measured material (maximum strain, minimum strain, repeatability and so on). Also to measure such small resistance changes they are usually connected to costly lab equipment. To use strain gages with other materials than steel or to simplify installation the gages are often glued to a base plate with bolt holes.

This kind of boltable strain gages (not to be confused with load cells, which are usually intended for weight measurements in scales) are usually rather thick so installing them to weaker materials like wood does not work very well as the gage is stronger than the wood plank and starts operating as structural support.

If the strain gage holder could be printed using PLA and measured with an Arduino board it would open a whole new world of possibilities. The sensor could be cheap and made into any shape possible and be placed on a lot more materials.

In this setup the material unreliability of the PLA turns into an advantage as printing multiple sensors becomes trivial and cheap.

Unfortunately it is very probable that the PLA will have some very unfavorable material characteristics. Measurements of any nonmetallic material will also add their own nonlinearities. Depending on the material both humidity and temperature might need to be measured. To compensate for these complexities and to further reduce costs an Arduino board will be connected to the boltable gage to linearize using a neural network the measurements and output them as a simple USB-serial stream.

Bill of Materials for the cheaper printable version[edit | edit source]

Created an OpenScad parametrized file that can print all three layers of the boltable gage in one go and tested it on four different LulzBot Minis and a LulzBopt Taz during two different days. Initial results were not promising. Prints were uneven, different in size and strength depending on which printer was chosen and what temperature(humidity) the room had at the time. Experimenting with initial extruded layer heights and number of extruded layers for the baseplate led to a workable solution for the quality problems (Initial layer 0.500 mm, 2 further layers 0.250 mm each) but these settings were experimental and seemed to work well only in one of the four printers. Second attempt was made using a rather unusual approach of printing all the plates on their side. This topology led to an unexpected success. All printers fared well, no setting changes from then default were needed for the printers and the resulting plates were even in quality and more pleasing to the eye and warp free.

Prints were generated from OpenScad file File:Boltable straingage.odt which mediawiki currently vehemently refuses to upload. I have wrapped the .scad file inside an OpenOffice .odt file for now. I will update the link to a proper file when the upload problem has been solved.

Measurements side by side with lab equipment to evaluate PLA as a base plate material and to evaluate the quality of the output from HX711 AD-converter. Images and data will be posted here after the tests.

This sensor is currently in prototyping and testing phase. If you wish to get mauled by neural networks math and unexpected material effects in high vibration environments. You are more than welcome to participate in the research, but otherwise steer clear of this design until I have posted proper measurements and there is at least a rough estimate about how long the sensor can withstand stress and vibration. The HBM sensor mentioned in the "Similar commercial product" section is my personal "go-to" sensor of choice and has not let me down. Use the HBM sensor unless you absolutely wish to go where there are known to be an unknown number of unknowns waiting to complicate you work.