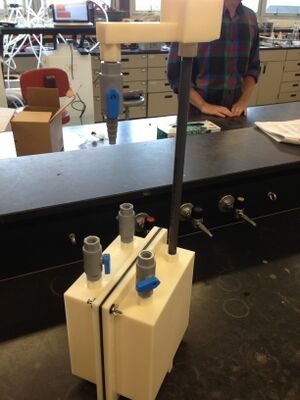 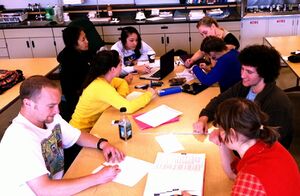 To increase awareness of pressure retarded osmosis (PRO) as a potential source of renewable energy, an interactive device that demonstrates power generation and osmosis through a semipermeable membrane was developed by a group of students from Humboldt State University's Section of Society of Women Engineers. The lab-scale device was fabricated using a 3D printer, which constructs three-dimensional solid objects from digital models. This method of construction allows for replication of the device; requiring only the digital plans, a 3D printer, and the thermoplastic used by the printer. 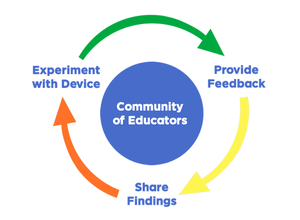 The project objective is to build a community of engineers, scientists and educators which utilizes the PRO device and contributes to the community by providing feedback and sharing their findings. SWE will help build this community by making the device available and promoting the system to aforementioned interest groups.

Pressure retarded osmosis (PRO) is an emerging technology in which power is generated by the interaction between saltwater and freshwater through membrane permeation. During PRO, a low-salinity (feed) solution is drawn through a membrane into a pressurized, high-salinity (draw) solution (Figure 1) Power can then be generated by releasing the pressure through a turbine.

Concentration polarization (CP) is a phenomenon that describes the accumulation or depletion of solutes near the interface of a membrane [1]. Two types of CP occur in a PRO configuration: dilutive external CP and concentrative internal CP. In this investigation, predicted flux and power density values will be compared to experimental values. Due to CP, an increase in osmotic pressure differential is not expected to cause a proportionate increase in flux and power density.

The PRO device has two 7"x7"x2" chambers that sit side by side and are separated by a semipermeable membrane. Both chambers have two ¼" female NPT threaded hexes in their ceilings. The chambers are clamped together by 12 screw/hex nut/washer assemblies, with two 1/16"-thick nitrile gaskets and two membrane support screens in between (Figure 3). One chamber is non-pressurized and holds the feed solution; the other chamber is pressurized and holds the draw solution. The pressurized chamber has a 12"-long clear PVC pipe threaded into its ceiling, with an 80 mL reservoir above. Water from the feed solution flows into the draw solution, forcing water to rise in the pipe and store in the reservoir. The reservoir has a ¼" NPT plastic valve threaded into one end of its floor, which releases fluid onto a water wheel below. Fluid from the wheel is captured in a funnel, which drains back into the draw solution. 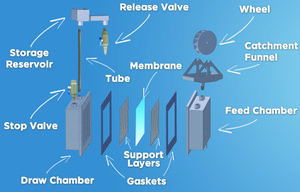 Two coats of fiberglass resin were painted on all 3D printed objects to reduce leakage of the device. ¼" NPT male and female threading devices were used to better define the printed threading on the chambers and reservoir and on the funnel, respectively. For each gasket, the outer perimeters of the main chamber and mesh screen were drawn onto 1/16"-thick nitrile and cut with an exacto knife. Twelve holes were made for the clamping assemblies using a hammer and a steel punch.

Membranes: For the experiments a flat-sheet cellulose triacetate (CTA) forward osmosis membrane was used from Hydration Technology Innovations in Albany, OR. This particular membrane has been determined to be the best available membrane in FO applications [2].

Solution Chemistries: Certified NaCl from EM Science Industries and JT Baker Industries was used to prepare the various feed and draw solutions. The draw solution concentrations were varied in order to provide a range of values for flux and power density. Draw solution concentrations used were 35, 70, 150, and 300 g/L, and DI water was used for all feed solutions. OLI Stream Analyzer 2.0 (Eqn. 4) was used to calculate the osmotic pressure differential for each setup (Table 4).

Table 1. Criteria and constraints determined for the design of the PRO device.

For the experiments the feed chamber was filled with DI water and the draw chamber with the NaCl solution. The time for the rising water column to reach the reservoir was measured. Also, the volume of the water collected in the reservoir for the 10 minutes following was measured.

Outreach possibilities the HSU section of SWE hopes to pursue include demonstrations for:

Those interested in obtaining the digital plans for education and research purposes may submit a proposal of their intentions at our website proeducationhsu.org

Section of Society of Women Engineers at Humboldt State University

Visit us for more information at: proeducationhsu.org