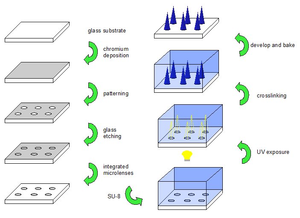 Polymer microneedles are micron-scale needles, usually in an array, in development for transdermal drug delivery and controlled-release.

The development of more advanced drugs has created the need for a more advanced way to administer them. DNA- and protein-based compounds cannot be administered orally (since they break down in the stomach before they can be absorbed) and hypodermic needlesW are fairly painful and invasive. This has led to transdermal drug delivery as an attractive solution. The problem faced by most transdermal patchesW is the low permeabilityW of skin. Skin permeability can be increased through the use of drugs and ultrasound but the results are limited. Microneedles have been shown to greatly increase the skin's permeability, allowing for an effective transfer of drugs.[1]

In the past, microneedles have been made from metal, silicon, and glass.[2] Today, some very promising technology is focused on polymers since they are biocompatible, biodegradable, and easy to manufacture. They can degrade in the body safely, providing a drug distribution method [3] and eliminating the risk of the needles fracturing and becoming embedded in the skin.

Microneedles come in a variety of shapes and sizes, however they are usually round. The tips can be anything from tapered-conical to chiseled to beveled. The most important feature of the tips is that they be sharp in order to effectively pierce the skin. The needles can very in lengths from 150 μm to even 1500 μm, however, the entire length does not pierce the skin. Skin is covered in hair and tiny wrinkles, so it is not completely flat. Ideally, the microneedles will only penetrate deep enough to pass the first ~15 μm of skin, the barrier known as the stratum corneumW and so will not penetrate deep enough to touch nerves.[1]

When tested with calceinW, a particularly difficult compound to deliver transdermally, the permeability of skin increased 1000-fold with the insertion of microneedles. When the microneedles were inserted for 10 seconds and removed, there was a 10000-fold increase in skin permeability, and when removed after an hour, an almost 25000-fold increase. The permeability is lower when the needles remain inserted because they themselves block the holes created in the skin.[1]

Polymer microneedles with a tip diameter of 25 μm, a base diameter of 200 μm and an interfacial area of 490 μm^2 have been calculated to require an insertion force of 0.058 N. The failure force of needles of different length decreased from 0.22-0.10 N/needle over a needle length range of 700-1500 μm. This is because the load at which a column fails due to buckling decreases with increased length. However, these calculations show that polymer microneedles are strong enough to withstand the force of insertion with a safety factor of 1.7-3.8, depending on the length. With similar calculations, the failure force was shown to increase with base diameter, and was higher for polyglycolic acidW (PGA) (0.32 N) than for polylactic-co-glycolic acid (PLGAW) (0.06 N).[4] So, with proper geometry and material choice, failure of needles upon insertion is not a concern.

Most microneedles are manufactured through micromolding, which is similar to traditional injection moldingW. This process lends itself well to mass production. However, a master structure must first be created to provide a mold.

Microneedle master structures are produced through photolithographyW. First a substrate, usually glass or silicon, is coated with an etch-resistant such as chromium or silicon nitride. This can be done through a variety of methods such as sputteringW or chemical vapour depositionW. This protective layer is then lithographically patterned to expose the substrate in a desired array of the required microneedle size and shape. The substrate can then be etched to create a microneedle tip shape (for bevelled-tip microneedles) or integrated microlenses (for tapered conical microneedles). The protective layer is removed through ion etchingW and SU-8 photoresistW is spun onto the patterned substrate. In the case of bevelled-tip microneedles, a photomaskW of the desired shape and array is placed onto the SU-8 and it is exposed to UV light. This causes the molecular chains to crosslink and the exposed material solidifies. The non-crosslinked polymer is then developed away, leaving behind an array of the desired microneedles. The process is similar for tapered conical needles. The glass substrate is etched with an array of semi-circular microlenses. The back of the glass is patterned with an opaque photomask of this same array. SU-8W is coated onto the substrate and UV light is shone onto the back. The microlenses focus the UV light into a conical shape, crosslinking the polymer in that area. The non-crosslinked polymer is once again developed away leaving behind a master structure of the desired needles. These master structures are then baked to harden.[1]

Next, polydimethylsiloxane (PDMS) is poured over the master structure to create a negative mold, which is used for rapid reproduction with micromolding. The PDMS mold can be used repeatedly, as can the master structure. However, breakage has been a problem.[5]

Although the injection micro-molding is rather quick and efficient, the master structure takes a long time to make. Hard-baking can take upwards of 12 hours and the PDMS mold takes 12 hours to cure.[1]

Injection moldingW is a very well known and efficient process, however, there are difficulties at the micro-scale. Due to high aspect ratios and relatively high viscosity of the polymer melt, incomplete filling of the micro mold is common. So, the injection molding must be carried out at increased tool and melt temperatures (essentially the melting temperature of the polymer). Both the tool and the part must be cooled down before ejection from the mold which also increases the cycle time. High-aspect ratio molding cycle times can run as high as 7-9 minutes. Most micromolding machines also include a vaccuum in order to prevent air bubbles and incomplete filling.[6] These factors significantly increase the complexity of molding. Polymer-particle based micromolding resolves many of these issues.

Polymer particle-based micromolding is the process of filling molds with polymer microparticles and using an appropriate method (ultrasonic weldingW or melting) to bind them together, creating the desired structure.

First, microparticles ranging in size from 1 to 30 μm are produced. This is done through spray dryingW or double emulsionW. Both of these techniques require solutions containing the drugs to be encapsulated (if any), the polymer, and a solvent such as ethyl acetateW(spray drying) or methylene chlorideW(emulsion). In order to create layered microneedles, PLGA microparticles encapsulating any drug required are poured into a PDMS mold. They are baked for 5 minutes at 140◦C in a vacuum oven and then cooled. A reduction in volume(which is controlled by particle size) upon melting allows the mold to be filled with more particles. This time polyethylene glycolW (PEG) particles and PLGA particles are poured into the mold. The mold is heated at 70◦C in a vacuum oven for 5 minutes. The PEG particles melt, but the PLGA particles and previous PLGA layer do not. In this way, drugs could be encapsulated in PLGA for release, and multi-layered structures can be created.[3] The rate at which the polymer degrades in the body can be used to control the rate at which a drug is delivered. This rate can vary throughout the microneedle if different layers are used.

This technique proves to have many advantages over traditional melt micromolding. Firstly, the molds can be filled at room temperature and pressure since particles flow much easier than the viscous polymer melt. The drugs to be delivered are also not damaged and can be protected by a polymer with a high melting temperature.[3] They are also heated for a much shorter time since during injection molding the melt must constantly be heated to remain fluid. This process can easily be scaled for mass production with cycle times just slightly higher than traditional micromolding. The cycle time would include the time for filling, baking and cooling per layer. So, cycle times increase proportionally with layers. With only one layer the cycle time could be very similar to that for traditional melt molding (approximately 7-9 minutes).

Although this method significantly improves the efficiency of microneedle production, a master structure is still required and this is the most time consuming step. Master structure production can completely be eliminated through two-photonW induced polymerizationW.

Two-photon polymerization uses a laser in order to solidify photo-reactive polymer. Currently it is only available for hybrid organic-inorganic materials which fall under the trade name Ormocer.

A resin of starter molecules and monomers is prepared. Femtosecond pulses from a titanium:sapphire laser are focused onto a volume of this resin. The resin in focus of the laser absorbs the photons from the pulse and is crosslinked into a polymer. The reaction is shown below:

The laser passes through the out-of-focus resin without affecting it. The uncrosslinked polymer can be dissolved away with a solvent leaving behind the desired microstructure. This process would greatly simplify master structure manufacturing, since it involves only one step and the microstructures could be designed in a CAD program. A larger variety of microneedle shapes could also be produced - including hollow needles. Research is being conducted on achieving the same results with biocompatible and biodegradable ploymers, which could one day eliminate the need for molding altogether.[7]

This is just one application of two-photon polymerization. It can be applied to a multitude of microprocessing needs, especially in the biomedical field.

If further developed, polymer microneedles could prove useful for immunization and vaccination in developing countries. The patches are small, portable and could be administered by someone with little or even no medical training.

With the future development ofbiosensors blood could also be drawn and tested by the tiny patch [8].