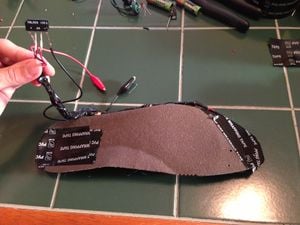 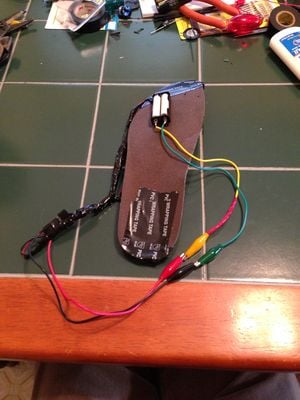 The goal is to construct a piezoelectric energy harvesting device that can generate enough energy to create a noticeable charge in a battery.

When connected to an LED a piezo pad would turn on the LED for a fraction of a second when tapped. The method which produced the brightest response was when the led was bent slightly and release as a flicking motion. The q-tips were placed under each piezo pad to increase the amount of bend each pad receives when stepped on, but applying pressure by stepping is an inefficient way to release charge from the piezo pads. When testing one piezo pad connected to a battery a noticeable charge was created in the battery, but it was not significant enough to rule out the possibility that the battery was only excited by the piezo pad. Piezoelectric pads have very small current outputs compared to their voltage outputs, which makes it challenging to effectively charge a battery with them.

After using the soles for a couple of days some of the piezo pads don't seem to work as well as they used to when connected to an LED light to test. The q-tip may bend them too much, particularly under the heel.

More testing must be done to confirm whether or not the piezo sole actually charged the batteries, but the system did demonstrate the piezo pad's ability to turn on an LED light and produce some electricity. An alternately constructed system could charge a battery, but the efficiency of piezoelectric pads is very low for harvesting the mechanical energy provided by walking.

Page data
Retrieved from "https://www.appropedia.org/w/index.php?title=Piezoelectric_Energy_Harvesting_Shoe&oldid=598357"
Cookies help us deliver our services. By using our services, you agree to our use of cookies.
Categories:
About Appropedia · Policies · Contact · Content is available under CC-BY-SA-4.0 unless otherwise noted.