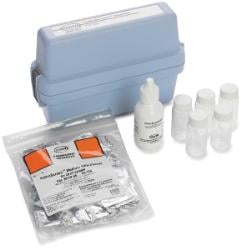 Coliforms in water have been found to be associated with hydrogen sulphide (H2S)-producing organisms, or bacteria. Water tests in developing countries need to be low-cost and involve minimal equipment.

The H2S test is used to test drinking water for fecal contamination. The test uses common laboratory chemicals and is performed by adding a specified amount of "boiled" water in addition to a common liquid detergent to an H2S paper strip. After drying in a low-heat oven, the test water is collected and stored in a dark room for three days. If the sample contains hydrogen sulfide-producing organisms, the paper and water will turn black and a generally unpleasant smell created.

A study of the H2S test was performed in the Pacific Islands, where it was determined that the test is good for testing drinking water supplies for fecal contamination in the Pacific Islands, in particular, the remote rural and outer island areas. A multi-country inter-comparison study took place in 1990. Also in 2011, a systemic review and meta-analysis of H2S tests versus standard indicator bacteria tests for fecal contamination of water were conducted in multiple settings. Further analyses of this device are needed.