This is a biodigester built using commonly available IBC containers

Thomas Culhane designed and innovated this HDPE Plastic IDB Tote 3-tank water-displacement pressurized biogas system in Cairo, Egypt and built the first one working with Solar CITIES associates Hanna Fathy and Mike Rimoin and students from the SEKEM Environmental Science Center in October 2009 after many experiments on his own porch in Essen Germany. After building many ARTI India style telescoping biogas digestors in Cairo Egypt throughout the previous year Culhane realized several improvements were necessary for spreading the technology out of the East and Middle East to colder climates. In 2013 Thomas decided to make the design explicitly 'Open Source'

The design details will be copied here to; Improve awareness of the design & ensure the design remains available through Appropedia

Hydrogen Sulphide, or 'Rotten Egg' gas, will combine with the moisture in the biogas to form sulphurous acids and these can corrode almost anything. The way to get rid of it is to give it something to corrode that you don't want; like some steel wool, for instance, in a wide-necked bottle or flagon. It must be of clear glass with the gas inlet pipe running down to the bottom of the container and an outlet pipe coming away near the top. Of course, the whole thing needs to be gas-tight. As you use the gas, the steel wool will corrode from the bottom upwards taking up the hydrogen sulphide by conversion to black iron sulphide which can later be reused after being oxidised to rust (ferric oxide) by exposure to air, although the process is slower than the initial scrubbing one was. When the black corrosion reaches 75% of the height of the container, or so, it's time to change the steel wool or ferric oxide for fresh, sacrificial stuff. Diagram here

There is some interest in using algae to scrub C02 from biogas. This is relatively untested, although being investigated at a commercial scale

A review has been carried out by by SNV (Netherlands Development Organisation) in 2009. More here

There are a number of ways to modify small 4stroke (not 2stroke) engines to run on biogas. More here 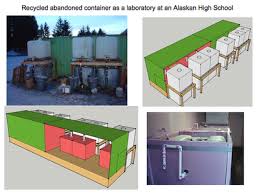 Inside, the 40 foot steel Conex shipping container has been insulated on all surfaces with two inch insulation board, dashing pink was the selected color. A wall has been installed in the middle of the container with a door in order to manage two separate environments with temperatures of 25 and 15 degrees Celsius respectively. Each of the two compartments contains three digesters, one with psychrophiles only, one with mesophiles only, and one with both psychrophiles and mesophiles in a mix

1,000 litre digester using psychrophiles harvested from "mud from a frozen lake in Alaska has produced 200–300 litres of methane per day, about 20 to 30% of the output from digesters in warmer climates.

Built within a greenhouse.

Temperature data from outside and inside the tank has been collected. Will be added here when available.

There is an Facebook group to discuss the development of this digester.