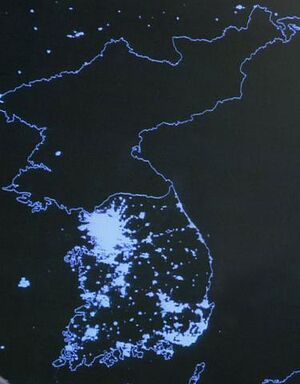 North Korea is a totalitarian stalinist government headed by Kim Jong-il, which maintains control through strict governmental isolation and ideology. The country is plagued by pollution, corruption, widespread famine, and energy shortage. Without consistantly produced energy, the country has had trouble exporting products. Without the monetary support produced from the exportation of resources, the country struggles to feed and provide for it's own people.[1]

Today, the country struggles to maintain it's decaying energy system and relies almost primarly on oil subsidies from China and international food aid from the United States and South Korea.

The US-DPRK Village Wind Power Project is a joint project by US-based, The Nautilus Institute, and the North Korean government. The Nautilius is a Berkeley, California based think-tank that helps build peace and restore sustainability.

The project is the first attempt by a US-based non-governmental organization to work with the DPRK. Not only was the project organized to promote North Korea away from nuclear energy relience, but also to strengthen the fragile connection between the West and the DPRK government.

The project installed seven wind turbines in Unhairi, a rural town 70 miles from the country's capital of Pyongyang. Unhairi is located in the more well-off part of the DPRK, but even so, it did not have power before the turbines due to a decaying electric system, and due to a tidal wave that damaged the city in 1997.

With the help of 50 North Korean engineers, technicians, and labours, the construction of the turbines begun in October 5th of 1998, and finished five weeks later. The towers are able to provide clean, renewable energy to power the town's medical clinic, school, and approximently 20 homes by producing 40 kWh/day.

The pilot project project was funded by Charlottesville, Virginia non-profit, W. Alton Jones Foundation, which provided the project with $400,000 for transportation, and equipment costs.

Page data
Retrieved from "https://www.appropedia.org/w/index.php?title=North_Korea_Wind_Energy&oldid=651474"
Cookies help us deliver our services. By using our services, you agree to our use of cookies.
Categories:
About Appropedia · Policies · Contact · Content is available under CC-BY-SA-4.0 unless otherwise noted.