Native beekeeping refers to the keeping of indigenous bees[1] (bees that are common to the area in question). Unlike common contemporary beekeeping, it hence does not use a non-indigenous species (ie Apis mellifera) for any location on earth, but selects the most appropriate species of bee based on the location. Since there are more than 20,000 species of wild bees on earth, there is a huge selection of bees per location.[2] 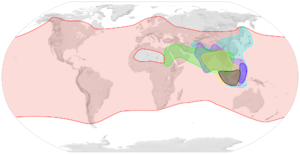 Honeybees are the most known type of bee. Several species exist including ? Honeybees live for ? years and have a queen. New queens are also born at specific times and can start a new colony on their own (swarming), taking with them a part of the colony's members. Stingless bees (ie Melipona beecheeii, ...)[4][5][6] are quite similar to honeybees but differ in the structure of their hive. They also make a lot less honey (generally >1kg per year per hive (and some even only a few cm³ of honey per year per hive), as opposed to 75kg per year per hive that honeybees produce). Some species though still make fair amounts of honey, ie Melipona scutellaris and Melipona compressipes produce upto 8l of honey per year. It should also be taken into account that the honey is quite different (called "bush honey").

Unlike honeybees or stingless bees, bumblebees do not hibernate. A bumblebee queen starts a new population each year in spring. Larvae hatch from eggs that she lays. She takes care of the young and collects pollen and nectar. Once between 150 and 400 workers have been made, young drones and queens are born. After mating, the queens crawl into the ground to hibernate and restart the cycle. Bumblebees produce ? honey.

Solitary bees on the other hand, have no queen bees and every female bee is fertile. There are also no "workers" as the female laying bees are thus both queen and worker. Solitary bees also don't produce honey on a harvestable scale, making them thus only suitable as pollinators.

Each species of bee has to be nurtured at a specific way, and require specific plants, and specific beehives (some use clay, brick hives, others uses hollowed-out logs, ...). The beespecies also differ in how they construct their colonies, and thus not every type of beehive will be immediatelly usable, but instead, some may need to be modified, or entirely new beehive-designs need to be created. A safe beehive to use (fits most) is the log gum, as with this type (basically just a cavity), the bees constructs the colony all on their own. Beehive designs such as the Langstroth hive for example are specifically created for specific beespecies (ie Western honeybee, and some other honeybee species). With this type, most of the hive is already built and while this also means the bees don't need to produce as much beeswax, and can thus spend much more energy on making extra honey, the hive designs makes it only suitable to specific types of bees.

Design of the nest[edit | edit source]

All bees have at least honey & pollen pots and brood comb. Similar to honey, pollen is a food source (yet is specifically a protein source necessary during brood-rearing), brood comb is the whole of the chambers with larvae (new bees). Depending on the types of bees though, there may be additional chambers, ...

Honeybees make their honey & pollen pots above the brood comb. The Langstroth hive and box hive have taken over this design, making it specificly useful for honeybees.

Stingless bees nests have an entrance after which there is a passageway, ending in the storage pots. In some species, between the entrance and the nest itself there is a structure called the "vestibule" that is similar to the nest and disorients parasites and predators, acting as a defense. Next to the entrance and in many other locations there are deposits of resin, used frequently by the bees. The storage pots have an oval shape. Some species build honey pots different from the pollen pots; the latter are longer and larger than the honey pots, which have an oval shape. The brood comb can be horizontal or in a cluster, in which the brood cells lack common walls. The brood comb and sometimes the storage pots are, in many species, enveloped by a series of membranes of cerumen which is called the involucrum and is important for thermoregulation. The brood combs are suspended and separated by connectives and pillars.[7][8]

Solitary bees generally simply lay their eggs in holes (ie in hollow reeds or twigs, holes in wood, or, most commonly, in tunnels in the ground).[9] As such, simply making holes in any material (ie in a wooden block, ...) would do perfect as a housing for this type of bee.

This highly depends on what you're purpose is and what crops are near your location/what crops you like to get pollinated. Honeybees are a good choice if you like to attain the most financial revenue. Besides attaining a very large amount of honey, and some additional products (wax, propolis), you also attain the service of pollinating plants. Keep in mind that we need about 1 hive per acre (4047m²).

As mentioned above, solitary bees and bumblebees? do not create any harvestable amount of honey at all (so just provide the service of pollination), and stingless bees (and most other native bees) create a lot less honey than what's the case with honeybees.

Bumblebees however are able to fly out/pollinate at low temperatures (from 5°C, whereas honeybees need 15°C). They are also active with low lightintensity (cloudy weather), windy conditions and can even be used in greenhouses (honeybees can not). Finally, another advantage is that bumblebees adapt much quicker to changes in the location of the hive. Especially for people that move the hives around a lot (ie to pollinate multiple orchards), this would be another advantage

A lot of native bees (stingless bees), and some solitary bees are better pollinators (sometimes use "buzz pollination") and/or are more suited to a specific crop (ie Blue orchard bee with blueberries).

Also, depending on the beehive used (ie Langstroth hive, top-bar hive (Kenyan (KTBH) or Tanzanian (Tanz)), D.E. hive, miller hive, modified commercial hive, modified Dadant hive, Smith hive, box hive, log gum) it may or may not be possible to move the beehives, which would eliminate possibilities for pollination of orchards (another source of revenue). If moving the beehive with the specific species of native bee in question is not possible, the species of bee is best used in integrated systems (in which the beehive is kept all year at the (self-owned) orchard). Alternatively, the beekeeper can nurture the bees all year round at an orchard he himself does not own.

As the person running the apiary generally takes out (most of) the honey with honeybee nests, the bees need to be fed with something else to allow them to hibernate. This is often done with sugar. Generally, 8 to 15 kg of sugar needs to be fed to the honeybees. Although this is an extra expense, it is still profitable as honey is a lot more valuable/costly than sugar.

Bumblebees (or theroretically honeybees) that only visit flowers without nectar too need to be fed with sugar.[10]

Why use native bee species at all ?[edit | edit source]

How to construct the hives[edit | edit source]

As mentioned above, the type of hive to choose depends on the beespecies you wish to use. Several hive designs for honeybees may be found online. These can be made DIY.[13]

The Langstroth is the most cost-efficient, the top-bar hive is only 20% as efficient as the Langstroth. This as due to the open bottom of the top-bar hive, a lot more wax needs to be produced by the bees, and this energy can thus not be spend in production of honey. Honey is much more valuable than wax.

The top-bar hive is a lot less efficient but may nonetheless be useful hives for beginning beekeepers. This, as the hive can be made more easily, and from basically any type of container. It is also a lot cheaper (does it contain pre-made cells for brood comb/pollen/honey ?).

DIY construction of hives has risen sharply and more and more information about their construction is now available through the internet. This, as one of the essential elements in the developing world is the price of the materials needed, and in these parts there is an essential lack of this. Especially appropriate technology organizations as VillageEarth are making a great contribution to diy beekeeping. Besides regular hives for Western bees (langstroth hives, top-bar hives, ...) [14] [15] [16], special designs are also available for indigenous (or 'native') bees [17][18].

See also Aussiebee/ANBRC booklet "Tips on Stingless Beekeeping by Australian Beekeepers (Volume 2), scottishbeekeepers and beesource for langstroth hive construction] and this website for top bar diy hive construction. A very simple stingless beehive can be found at sugarbag. However, these hives seem unsuitable to extracting honey and aren't very efficient. They may offer some advantages to basic log gums though (ie inspection, ...) Better hives seem to be the Nogueira-Neto hive, and UTOB hive[19]

The Langstroth (as well as the box hive) are composed of (in this order):

Stingless bees can be housed in either log gums (simple cavities) or top bar-hives?

Bumblebees can be housed in homemade hives (see http://www.bumblebee.org/nestboxes.htm )