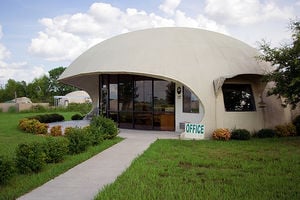 Monolithic domes are constructed following a method that requires a tough, inflatable Airform, steel-reinforced concrete and a polyurethane foam insulation. Each of these ingredients is used in a technologically specific way. This technology was developed by the Monolithic Dome Institute (MDI). The domes can be designed to fit any architectural need: homes, cabins, churches, schools, gymnasiums, arenas and stadiums, bulk storages, landlord dwellings and various other privately or publicly owned facilities.

The dome, when finished, is earthquake, tornado and hurricane resistant (FEMA rates them as "near-absolute protection" from F5 tornadoes and Category 5 Hurricanes). Recently, a number of monolithic domes constructed using MDI techniques have survived major disasters.

MDI has also developed the technology to build so-called "EcoShells". These are simple structures to provide for the basic needs of a family. They are designed specifically to answer the needs of shelterless people worldwide. They are strong structures that can withstand natural disasters, fire, termites and rot. In underdeveloped areas with hot climates, EcoShells make affordable, low maintenance, sturdy housing. In industrialized nations, EcoShells make superior workshops, garages, storage sheds, etc.

EcoShells are easy to build, easy to teach others to build and fast to construct. They require no serious equipment or education – just simple materials, cement and reinforcement available almost everywhere, and workers willing to work. Concrete is layered onto the exterior of an inflated Airform. The basic unit is a concrete floor with a 6-meter diameter. Preferably, the dome should have a sink; a walled-off toilet and a walled-off shower. The balance of the dome is open.

It has been estimated that Haiti, for example, needs approximately 200,000 EcoShells to house up to 1 million people. Although that sounds like a very daunting task, it really is not. A few good workers can build an EcoShell in three to five days. [1]

How it’s Built: For a 6-meter dome, you need: 50 bags of cement, 2500’ roll of basalt reinforcing or fiberglass, about 5 cubic meters of small size concrete aggregate, an Airform that can be used hundreds of times, a small inflator fan and a few workers primarily with hand tools.

Use of Basalt Fibers[edit | edit source]

The basalt reinforcing for the monolithic dome/ecoshell can now be made of basalt fibers. Basalt fibers are made of volcanic rock that is melted and spun. Global production capacity is increasing as they are becoming more popular for various structural engineering applications. This material was first developed in the Soviet Union, mostly for military applications. Ex-Soviet countries are still where most of the experience and production capacity is (Ukraine in particular). Given that the Soviet Union disintegrated almost 20 years ago, much of this information should be in the public domain now, but may not be so easily accessible. Those few companies that have the experience with this material are unlikely to share it.

Basalt rebar is now produced by several countries) weighs 1/11th as much as steel, but is stronger and – most importantly – will not rust. Fiberglass reinforcing can also be used since it does not rust. For low-cost, quickly built housing, not rusting is imperative.

Some links to basalt fiber suppliers