Mercury is used in amalgamation to recover gold in its native or 'free' form. While mercury simplifies the process greatly, it must be remembered that it is a very dangerous substance, especially when inhaled or absorbed through the skin.

Mercury is an 'accumulative' poison, meaning that repeated exposure, even of very small amounts, can build up in the body, leading eventually to mercury poisoning.

Mercury released into the atmosphere is also dangerous because it combines easily with other substances (such as hydrocarbons) to form compounds which can easily be taken up by other organisms, such as fish and shellfish. A build-up of mercury in these organisms can make them dangerous to eat.

The need for a closed retort[edit | edit source]

Because of these dangers, it is very important to handle mercury extremely carefully. When working with gold amalgam, the mercury should be distilled in a closed retort. This not only ensures the health of those involved and protects the environment, but the mercury can also be recovered for future use.

Figure 2: Parts required for the retort

The retort's pipe and fittings, except for the wooden stopper (2e) should be made from ordinary galvanised iron. Piping made from copper or other metals should not be used as these combine readily with mercury. 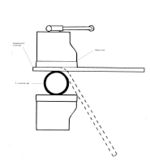 - Bend the pipe 4 inches from the threaded end into a smooth curve, with an angle of about 60-70 degrees. If possible, use a pipe bending machine to have a smooth curve. Alternatively, clamp the ¼-inch diameter pipe (2a) to a larger diameter pipe (4 to 6-inch) and then manually bend it around the bigger pipe (Figure 3).
- Heat the pipe and fittings until red hot, before assembly, to burn off the zinc coating (zinc reacts with mercury).
- Allow the retort to cool, then wash it. 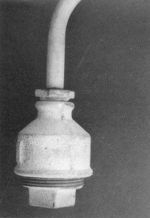 The purpose of the retort is to separate the gold from the mercury components of the gold amalgam. By applying heat to the amalgam (Figure 1), the mercury is burnt off as a gas, which passes along the pipe to re-condense as a liquid. The gold remains in the distilling chamber of the retort, while the mercury is collected at the discharge end in liquid form. 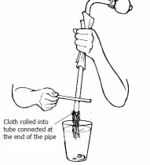 Figure 6: Tap the pipe to remove the mercury

Wrap the amalgam into small balls with a piece of paper (the foil from a cigarette packet is ideal). This will help prevent the gold from sticking to the distilling chamber under heat. Note: Wear rubber gloves whenever you are handling mercury to avoid contact with the skin.

Place the wrapped amalgam in the plug (2d) and screw tightly.

Seal all the joints with wet clay or mud. This will prevent mercury gases escaping into the atmosphere during the heating process.

Prepare the source of heat, normally charcoal (an oxy-acetylene torch can also be used).

Secure the retort on a stand that places the distilling chamber directly over the source of heat. At the discharge end, place a glass of water, with the cloth “tube” connected at the end of the pipe submerged (Figure 1).

Use bellows to increase heat. Continue applying the bellows until the distilling chamber is red hot or bubbles stop coming out of the discharge end. This part of the process normally takes about 5 to ten minutes.

Remove source of heat and allow the retort to cool down using a wet cloth or water, but taking care to keep the “cloth tube” connected at the end of the pipe submerged in water to avoid mercury gas from escaping.

With the retort vertically with the discharge end still submerged in the water (as Figure 6), tap the pipe with a stick to dislodge any mercury still in the pipe.

Remove the retort from the water and cover the discharge end immediately with the wooden stopper.

Allow the distilling chamber to cool first before proceeding to remove the gold.

Unscrew the plug and remove the gold. Screw the plug back immediately and remember to keep the retort fitted tightly together at all times after use, as some of the mercury will remain trapped.

Transfer the recovered mercury to a proper container. To prevent evaporation of mercury while being stored, put a layer of water over the mercury.

Store the container and the retort safely, out of sunlight, away from heat and out of reach of children.

Notes: In all cases of mercury poisoning, refer victim to a doctor after giving First Aid. Never try to make an unconscious person take a drink. Never use any oily substance or ointment without medical advice.