Malaria is an infectious disease of humans and other animals caused by microorganism of the genus Plasmodium. The microorganisms first infect the liver, and then act as parasites within red blood cells, causing symptoms that typically include fever and headache, in severe cases progressing to coma or death. A map showing the occurence of the disease on earth can be found here 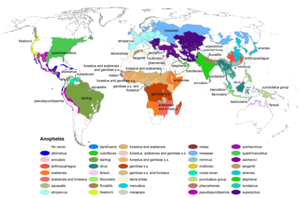 Map indicating the prevailance of the different types of mosquito-species that spread malaria. Using insect-repelling plants specifically tailored to that mosquito-species could prove more effective

Five species of malaria can be distinguished, triggered by different Plasmodium species. Severe disease is caused by P. falciparum while the disease caused by P. vivax, P. ovale, and P. malariae is generally a milder form that is rarely fatal. P. knowlesi, prevalent in Southeast Asia, causes malaria in macaques and can also cause severe infections in humans. Most of the types of malaria occur on generally the same places on earth, for an example, see the occurence of P.falciparum and P. ovale

Depending on the type of malaria, the treatment (and thus the drugs provided will vary).[1][2]

To some extend, some people (often those living in area's where the disease is endemic) have evolved to be partially genetically resistant to malaria. This resistance is often accomplished by diseases as sickle cell disease, thalassaemias, glucose-6-phosphate dehydrogenase deficiency as well as the presence of Duffy antigens on the subject's red blood cells.

People that do have not acquired such defenses will soon still be able to attain natural resistance through a malaria vaccine. Some vaccines are already on the market but are not yet 100% efficient.

Suitable additional measures to prevent malaria the destruction of malaria larvae in the vicinity (ie by removing freshwater in the vicinity, or by killing the larvae (either manually or by using predatory organisms). Other measures are the use of

Malaria is a deadly disease and treatment should be discussed with qualified medical professionals. See also wikipedia:Malaria#Treatment. The following includes a discussion of both proven and less-common treatments:

Drugs such as quinine (the oldest anti-malaria drug), artesunate, artemisinin, primaquine may be used. These drugs may be more or less effective depending on where you acquired the disease. This as there are varying degrees of resistance against one or several of the treatments, see this map Quinine is no longer effective but can be extracted from the bark of the cinchona tree. Artemesinin can be extracted from Artemisia annua. Generally specific cultivars of the crop are used such as Mediplant's Artemis, Anamed A-3 Some other plants too can be used to treat malaria. These include wormwood (Artemesia annua),Dichroa febrifuga (aka shang shan)[4], and extracts from Microglossa pyrifolia. The latter shows promise in treating drug-resistent strains of P. falciparum.

Note that to increase efficiency, it is best to combine artemesinin with another drug. These drugs are called ACT's (Artemisinin-based combination therapies) and are now even recommended by the WHO as first-line treatment for Plasmodium falciparum malaria in most countries where resistance has compromised the efficacy of older drugs. Two frequently used ACT's are artesunate-amodiaquine and dihydroartemisinin-piperaquine

Page data
Retrieved from "https://www.appropedia.org/w/index.php?title=Malaria&oldid=650008"
Cookies help us deliver our services. By using our services, you agree to our use of cookies.
Categories:
Maintenance categories:
About Appropedia · Policies · Contact · Content is available under CC-BY-SA-4.0 unless otherwise noted.