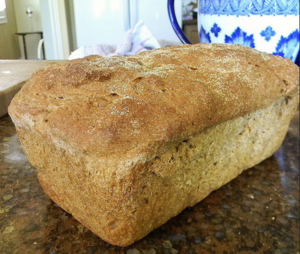 Making bread is an artisanal craft. It has been practiced for millennia in areas where grains have been native (Fertile Crescent).

This article will present 2 recipes; one which produces sourdough bread (which for millennia has been the standard bread since yeast has always been either unobtainable or very expensive in cases when it was obtainable). Even today, the making of yeast isn't very handy when you want to produce all ingredients yourself (so completely self-sufficiently).

[1] First, you need to make the starter: Do this by mixing 250 grams of white flower (i.e., wheat flour) with 250 milliliters of water, and adding 5 seedless chopped green grapes. Then, put in an airtight container (i.e. mason jar). Leave to stand for 2 days, then divide the mixture over 2 mason jars and add (125 grams of) flour and (125 milliliter of) water in both. Leave to stand for another 4 days, the starter is then ready. Note that you can keep rejuvenating your starter indefinitely by continuously splitting the mixture and then adding flour and water.

Making the sourdough bread: add 370 grams of flour to the 250 grams sourdough starter; add 249,5 milliliter (*1) of water, and 12,4 grams of salt (*2) -dissolve the salt in the water first before adding- Knead the dough for 10 minutes. Add a splash of olive oil. Put in a bowl, cover with plastic, leave to rise for a few hours; then kneed again for a few minutes (pushing out the trapped air), put in the bowl again, cover and leave to rise again for 3 to 5 hours. Put in the oven at 200°C for 50 minutes.

Th bloomer needs to be given 2 incisions on the bread with a knife, and then needs to be baked in an oven at 220°C for 25 minutes. You may also want to add a tray with some water in it at the bottom of the oven; this will create some steam effect which will make the bread even better