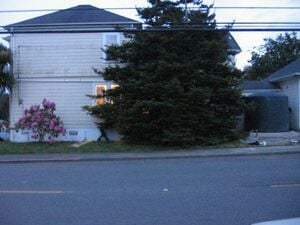 Nicole Vincent designed a rainwater catchment system for the residential property located at 1402 M St in Eureka, California. The owners of the house are principals with Democracy Unlimited of Humboldt County (DUHC). DUHC is a non-profit organization that educates citizens about the illegitimate seizure of our authority to govern ourselves. They design and implement grassroots strategies that exercise democratic power over corporations and governments. DUHC seek to create a truly democratic society by provoking a non-violent popular uprising against corporate rule in Humboldt County that can serve as a model for other communities across the United States.If you would like to learn more about DUHC please check out there website at www.DUHC.org

The rainwater catchment at 1402 M St is just the beginning of their move towards sustainability. Water collected from the system drip irrigates their vegetable garden,berries, fruit trees, and landscape.

"Rainwater harvesting is the capture, diversion, and storage of rainwater for landscape irrigation and other uses." The most common type used today, is the roof catchment system. Roof catchment systems use gutters and downspouts, from which water flows by gravity into storage containers, which should be sized to collect as much rainfall as possible. An existing roof is used to capture rainwater that is gravity fed into a storage tank via gutters and down pipes(Texas A&M,2003).

There are a number of key requirements common to all effective tank designs:

Why spend the time and money to collect rainwater when the city provides you with as much water as a person needs? Well,there is a long investment payback period of about two years for a rainwater catchment system, however, there are many immediate benefits such as the following:

The 104 in. by 104 in. pad gives enough space between the water tank and the house for maintenance or repair access. A perimeter of speed and corner blocks 8"x16" lined with rebar and filled with cement will create the support for the 2500 gallon water tank at 20,000 lb.

To determine the appropriate size of tank the following were considered

I measured the perimeter of the home Length*width = total area

The house has city water as a back up in case their storage of rainwater is depleted, however, 2000 gallons of stored rainwater will last them up to three months.

Here is a simple worksheet to predict the amount of water available to collect:

Number of gallons available to collect in one year:

The system will store rainwater in a 2500 Gal polythylene Tank that is 86" or 7ft tall and has a 96" or 7.9ft Diameter . A tank this size can easily interfere with the usable space in the main yard.

The gutters were cleaned of debris and overhanging branches before we worked on the down pipe connections.

Each downpipe has a diverter that allows the rainwater to flow to the tank or switch it when the tank is full to its original path through the existing downpipe.

All possible areas were considered for the location of the raincatchment system. The best location for the tank is outside of the main yard at the highest point of elevation. A tank this size can easily interfere with the usable space in the main yard. A list of the advantages and disadvantages of every area were key to eliminating it down to one area.

The Four Disadvantages of our chosen location[edit | edit source]

Building a sturdy and level pad for the water storage tank is very important When the water tank is at its full capacity of 2500 gallons it will weigh approximately 20,000lbs. The tank should have the weight of the water evenly distributed. Any slope can cause more weight and therefore pressure on one location of the tank.

Building a sturdy and level pad for the water storage tank is very important.