Liter Of Light, also known as "Isang Litrong Liwang," is a global, open-source movement based in the Philippines and founded by Illac Diaz in 2006. The project aims to provide economically and ecologically sustainable sources of light to households that cannot afford conventional electricity. This is achieved with the Solar Bottle Bulb, an invention that is easy to recreate and involves filling a 1.5L PET bottle with fresh water and bleach. From there, it can be installed onto the roof of a house. The bottle refracts the sunlight during the daytime and is as bright as a 55-watt light bulb. 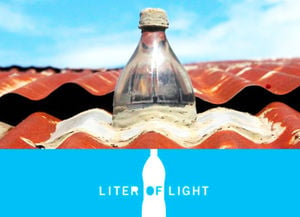 An installed Solar Bottle Bulb and Liter of Light logo.[1]

In 2002, Alfredo Moser from the city of Uberaba, Brazil, invented the Solar Bottle Bulb as a way of illuminating his house in case of emergencies.[2] There were frequent blackouts where he lived and the only buildings with consistent electricity were factories. He called it the "Moser Lamp" and it was used to provide light for families that could not afford traditional electricity.

In April 2011, Illac Diaz under the MyShelter Foundation began to use the cheap, yet effective technology as a way to bring light into underprivileged households in the Philippines.[3] They started with a local entrepreneurship business model. Solar Bottle Bulbs were put together and installed by locals who could earn a small amount of income for their efforts. The MyShelter Foundation was created in 2006 and it obtained the technology for the Solar Bottle Bulb from students at the Massachusetts Institute of Technology (MIT). The idea was based on the concept of Appropriate Technologies, which is a concept that provides simple and easily replicable resources for the purpose of sustainability.

Just one year after the creation of the MyShelter Foundation, over 200,000 bottle bulbs had been installed around the world. Liter of Light has a global goal to equip 1 million homes with bottle bulbs by the end of 2015.[4] 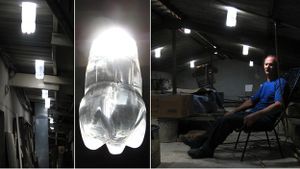 The Solar Bottle Bulb is made out of recycled 1.5 liter plastic bottles that are filled with water and a small amount of bleach. The bleach in the water prevents the bottle from becoming green with algae and keeps the water clear for longer periods of time.[5] The bottle is inserted through a steel sheet that serves as a lock to keep it from slipping or becoming loose. It is then attached to an iron roof so that a small portion of the bottle is left outside and the rest is inside of the house. A silicone-based or polyurethane sealant is used to make sure the small opening in the roof is weather-resistant. The light from the sun refracts through the bottle and gives off the same amount of light as a 40-60 Watt incandescent bulb. The bulb's brightness is entirely dependent on the amount of sunlight available.

The instructions for constructing a Solar Bottle Bulb are open source and available from several sources, including the official Liter of Light website.[6] 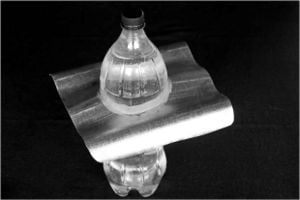 A Solar Bottle Bulb with sealant and attached steel sheet.[7]

The Liter Of Light is a cheap and environmentally friendly alternative to the use of incandescent light bulbs and or kerosene lamps during the daytime. The plastic bottles are recyclable and the materials used are easy to obtain. Therefor the creation of Solar Bottle Bulbs is not only energy efficient(using 0 grid electricity or fuel) but it is also cheep, easy to create and simple to install. This simple and affordable installation process mean that people living in poverty stricken areas can create their own sources on indoor lighting independently or with minimal amount of assistance. Once installed, the bottle bulb can produce light for an estimated five years before it needs to be replaced.