If I have ever made any valuable discoveries, it has been owing more to patient attention, than to any other talent.
— Isaac Newton 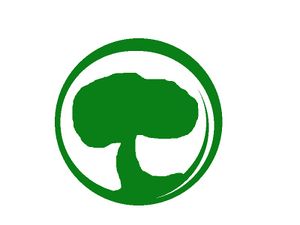 Apparatuses to aid in the understanding of Newtonian physics were designed for use in physics lab experiments for Laurel Tree Charter School's high school students. This project was designed by GREENtree, four students consisting of Christopher Alston, Andre Bernal, Julian Quick, and Jesse Zipursky. All enrolled in the Cal Poly Humboldt Environmental Resource Engineering program, Engineering 215 design class. The project was funded by Laurel Tree Charter School and educates high school students in the fundamentals of Newton's Laws of Motion with the use of the designed equipment.

Laurel Tree Charter School (LTCS) aims to educate their students for college curriculum by emphasizing sustainability in our environment and coexistence in our mixed diverse society. Located in Arcata, California, grades K through 12 are taught by the teachers that run the whole school's operation. Becca Schuler, the physical science teacher for grades 9 through 12 and the client, desired specific physics demonstrations for her class curriculum and thus these apparatuses were created. The apparatuses will be implemented in the classroom during lab activities in order to help the students understand the fundamentals of Newtonian Physics in a fun way.

To demonstrate Newton's three laws of motion, GREENtree built three separate apparatuses, one for each of Newton's Laws.

Inclined Planes The Inclined Planes experiment is designed to slide objects down an angular plane with different friction force cutouts such as a metal slate, carpet ruminant, and a rectangle of wood. These friction cutouts are attached to the base of the plane by four Velcro® pieces both attached to the cutouts and to the base of the inclined planes. The angle of the plane can be adjustable with the construction of an adjustable wooden lever. The inclined plane will have attached hinges to enable angular change that will be attached on the inclined plane as well as the platform.

In the Inclined Planes experiment students are instructed to find the maximum angle of the object on the inclined plane up until the object starts to slide down. At this point the maximum static friction force can be calculated using the equation F = µN. Different objects can be used such as wood and aluminum. Using the free body diagram, students can then find the static coefficient of friction at the point of the maximum static friction. Using the different friction plane cutouts, students can use various combinations of the objects and planes to find different static coefficients of friction of the different materials.

The Balloon Rocket is an apparatus that demonstrates Newton's Third Law of Motion, which states that for every action there is an equal and opposite reaction. Conceptually this is represented as the air acting on the balloon and the balloon reacting equally to the air. It consists of three separate parts, the two poles, the track, and the balloon. Average velocity is calculated when the balloon travels across the track.

It works by having air blown into a balloon that is taped to a straw on one side of the track. Then the balloon is launched by letting go of the end of the balloon which send it across the track to the other side. Simultaneously as the balloon is traveling, someone records the time it takes for it to stop at the other end. When the experiment is over the average velocity is found by using the equation Velocity = Distance/Time.

The cost table for the Loop de Loop Roller Coaster:

The cost table for the Inclined Planes:

The cost table for the Balloon Rocket:

The grand total for this project:

The total human-hours spent on this project 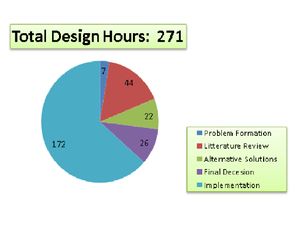 Balloon Rocket The Rocket Balloon prototype was functional, but very difficult to successfully use. The balloon was originally attached to the track using a curved piece of plastic tubing. After replacing the plastic tubing with a piece of drinking straw, the Rocket Balloon apparatus was much easier to operate. Beta testers found that the balloon had to be taped to the track so that the axis of the balloon is parallel to the track and that the balloon is taped near the end of the balloon, where the air comes out. The Balloon Rocket apparatus worked well in the classroom of Laurel Charter School where students were able to experiment with the apparatus. Students used two different types of balloons: balloon animal balloons and party balloons. It was found that students prefer party balloons while using this apparatus. 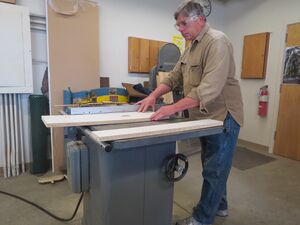 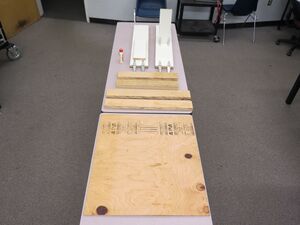 Base platform semi-complete(Photo by Chris Alston)
Cut base platform of plywood to specifications 27" by 24".
3 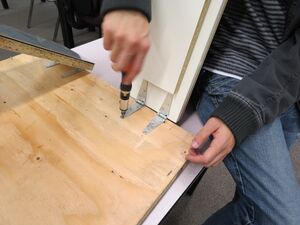 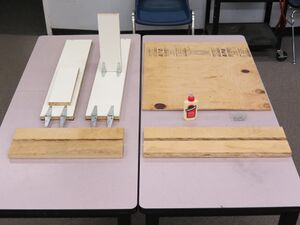 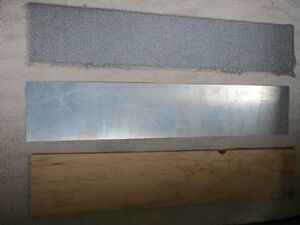 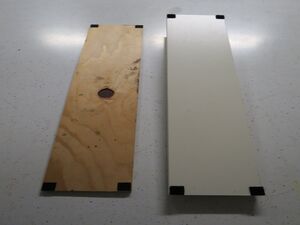 Velcro attached to the apparatus(Photo by Chris Alston).
Attach Velcro to the friction cutouts and the two inclined planes.
8 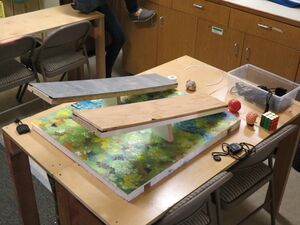 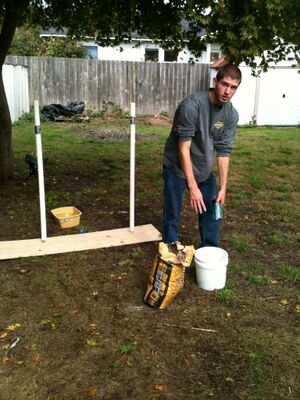 PVC pipes cut to specifications(Photo by Chris Alston).
Cut a 1 1/4 in. diameter PVC pipe into two 4ft. long pipes or have them precut at the store.
2 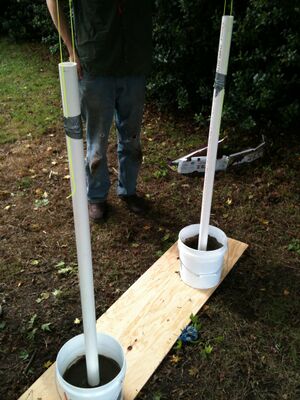 Mixing concrete(Photo by Chris Alston)
Mix the concrete in the two buckets till the buckets are 2/3 to 3/4 full. Use the instructions on the bag for optimal results.
3 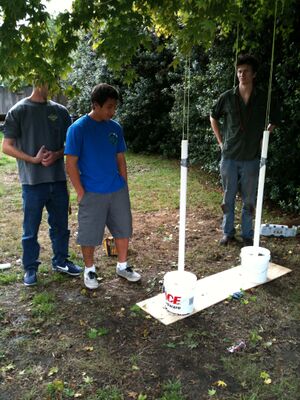 PVC pipes and concrete filled buckets(Photo by Chris Alston).
Place one of the PVC pipes into each of the concrete filled buckets. Tie the pipes to something above the buckets, for example a tree branch or fan if done indoors, to hold the pipes vertically at 90 degrees until the concrete hardens. Use an alternative method to hold the pipes in place if the above recommendation cannot be performed.
4 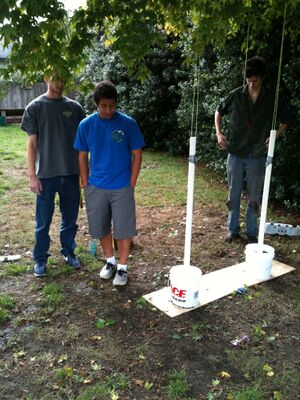 concrete drying(Photo by Chris Alston).
Wait 1-2 days for the concrete to fully cure.
5 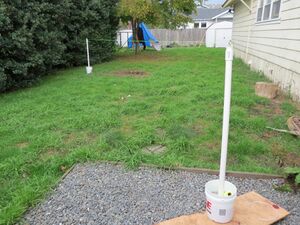 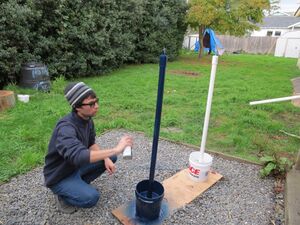 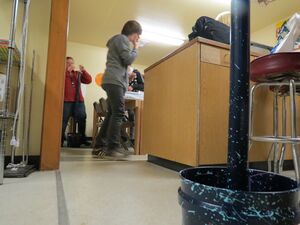 Straw and string connected(Photo by Chris Alston).
Put a straw onto the a piece of string with a random length and attach both ends of that string to the hooks on each pole.
8 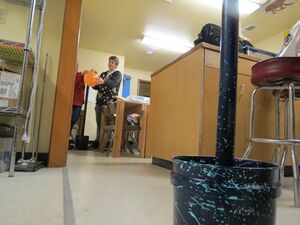 Final apparatus(Photo by Chris Alston).
Attach the blown up balloon onto the straw with tape.

1. Obtain all the materials needed to complete this project. Cut the base and platform plywood to specifications, 30" by 12". Cut PVC pipes into 6 segments and to the appropriate lengths with careful calculations. Miter or cut the Ceder garden stakes with 45 degree angles to fit around the border of the base plywood, sand down the edges so each corner is flush with one another.

2. Using wood glue and nails, secure the Ceder segments to the base plywood to form a rectangular border. Make careful calculations to where each support pipe will be placed for each segment on the platform plywood. Using a drill press, drill holes into the platform to fit the PVC pipes into. Tape and align the platform to the Ceder and base portion.

3. Making calculations, cut specific angles into each PVC pipe to help the support of the foam track, sand down each segment to remove burrs and rough edges. Using the E6000 adhesive, apply adhesive to the bottom of each STATIONARY support pipes and place each pipe into their appropriate spots thus adhering them to the base plywood through the platform plywood. Remove platform from the base after 1 hr of curing time. Cut another piece of Ceder to fit along the sides of the stationary pipes. Using wood glue, glue that piece to the side of the pipes for added support. Apply more adhesive to the base and sides of each pole to secure each pole into their official spots, appropriate curing time is 24 hours for best results.

4. To make the adjustable portion of the roller coaster, a slot must be created into the platform plywood by drilling two holes for the pipes and sawing straight lines between each hole. Place the platform plywood to the base and ceder plus PVC pipe segment. Make careful calculations on where the adjustable pipe segments will be distances from one another. Measure the distance and place each segment onto a small piece of plywood. Remove platform from the base again and start making measurements to where this plywood piece will be going. Make a frame around the slotted piece to keep it in place.

5. Finally almost done, sand down all the segments of wood and plywood to a smooth finish. Apply wood glue to the surfaces the platform will be in contacted with and attach the platform to the base portion for the final time. Nail down the platform into the ceder boarder with several nails or so. Allow glue to dry.

6. Take foam pipe insulation and cut into two pieces. Take one of those pieces and begin to attach it to the PVC pipe supports. To do so, apply E6ooo to the PVC pipes and foam tubing. Align the foam tubing onto the PVC pipe to form the loop de loop, allow it to cure for 24 hours. Success you have created this wonderful physics apparatus.

These demonstrations allow students to see the practical applications of Newton's laws of motion, and to learn about physics in a hands on way. Students will make predictions about the world using math, and then test their predictions using math. These experiments will show students how to interpret Newton's three laws of motion and see them in the real world. Laurel Tree could improve these apparatuses by creating more surface cutouts for the Inclined Planes, buying a wider variety of spherical objects to use with the Loop de Loop Rollercoaster, and by buying a wider variety of balloons to use with the Rocket Balloon.

The three apparatuses could be set up as a rube Goldberg machine. A marble could be launched from the Loop de Loop Rollercoaster, hitting at object on the Inclined Planes. At the right angle, most objects will start to slide from only a light push. The sliding object be tied to a piece of tape holding the air in the balloon in the Balloon Rocket. The object sliding will cause the tape to come off the balloon, releasing the air. The balloon then travels across the track. So, all three apparatuses can be used at once.