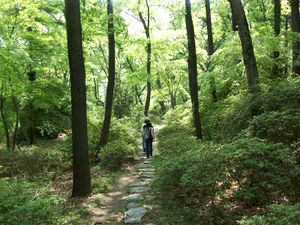 Japan had plenty of trees and forests in the ancient time, but under the control of shoguns and daimyos, Japan became peaceful and flourishing, and they needed more and more woods to build houses, ships and heat in the winter. The available trees would be used up soon, so it was the time to solve the problems that brought on by deforestation. Eventually, Japan succeeded and sustained for a long time. The ancient Japan was a successful example that the big society using top-down[1] approach to solve the environmental problems.

The approaches of environmental management are the bottom-up and the top-down. Small societies occupying a small island or homeland can adopt a bottom-up approach to environmental management. Because the homeland is small, all of its inhabitants are familiar with the entire island, know that they are affected by developments throughout the island, and share a sense of identity and common interests with other habitats.

Bottom-up management is in which people work together to solve their problems. For instance all homeowners on the Los Angeles street belong to a neighborhood safe, harmonious, and attractive for our own benefit. So, the community vote for an association and use their annual dues payment to maintain the town.

The opposite approach is the top-down approach suited to a large society with centralized political organization, like Polynesia Tonga.[2] Tonga is much too large for any Individual peasant farmer to be familiar with the whole archipelago that could ultimately prove fatal to the farmer's lifestyle.

Japanese forest policies arose as a response to an environmental and population crisis paradoxically brought on by peace and prosperity. Japan was convulsed by civil wars as the ruling coalition if powerful houses that had emerged from the earlier disintegration of the emperor's power in turn collapsed and as control passed instead to dozens of autonomous warrior barons (called daimyo).

Peace and prosperity allowed Japan's population and economy to explode. Within a century of the wars' end, population doubled because of a fortune combination of factors: peaceful conditions, relative freedom from the disease epidemics afflicting Europe at that time (due to Japan's ban in foreign travel or visitors).

From 1603 to 1867, Japan entered into the Tokugawa era[2]with peace and prosperity and was kept free from war. In this time, Japan's timber consumption soared. People preferred to wooden buildings than stone, brick or mud. Timber was used to supply construction needs for the growing population in the peaceful time. The shogun Ieyasu[3] and many of the daimyo started to build huge castles and temples to show their power to each other. When the fire broke out, a lot of timber was used to rebuild the building. A number of boats were made of wood to transport the timber to the whole country.

Deforestation not only caused wood shortages for timber, fuel and fodder, but disputes between villages, or villages and leaders. Because the second-growth trees sprouted on logged land were more flammable than the originals, the wildfires increased. If the forest cover protecting steep slopes were removed, Japan's heavy rainfall, snowmelt, and frequent earthquakes would cause the increasing of the rate of soil erosion.

After the bad consequences of the deforestation, Japan started to reduce wood consumption. In the late 17th century, coal replaced wood as a fuel, lighter construction was instead of heavy-timbered houses, and heating houses relied on the sun during the winter increased. 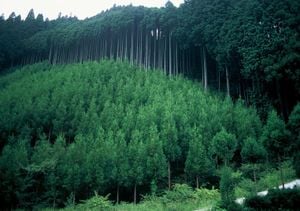 There are three stages in their wood supply chain which the negative responses aimed at:

At the first stage, Japan government closed off logged land in order to regenerate the forest. And if people wanted to cut down trees, they needed licenses. The government also banned the behaviors of burning trees.

At the second stage, on highways and rivers, the government established guard posts to check people shipping wood. It also improved monitoring the woodland management and made sure all the rules were obeyed.

At the third stage, the government specified the rules. The timber use should be based on social status. People who have higher social status had more timber to use. The shogun, who directly controlled nearly a quarter of Japan's forests, issued rules about the wood use for objects smaller than houses.

There are two important concepts which helping a lot solving Japan's forestry crisis:

Basically, silviculture[4]means the studies about planting trees, like how to choose seeds which fit for the soil and what kinds of trees people should cut. The first of Japan's great silvicultural treatises is the Nogyo zensho of 1697 by Miyazaki Antei.

The idea of plantation forestry is that "trees should be viewed as a slow-growing crop." Although plantation forestry is expensive and risky in the short term, the advantages it brought to Japan's forestry cannot be ignored. For example, people can pick valuable trees to plant in the forest instead of whatever useless trees. It's a good way to maximize the quality of trees. And people can also choose a convenient place where has lower transport costs.