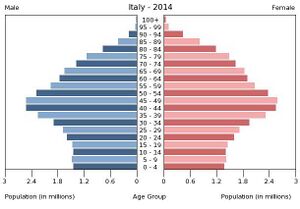 Aging Population Problem Italy's aging population is causing political, social and economic strife among its people. If Italy can't find a solution to this problem, there will likely be an economic depression caused by a small working population that can no longer sustain social security benefits for the large elderly population. The median age for an Italian citizen is 44.5 years old. Children and young adults 0-24, years old, make up percent of the country's population. Adults 55 and older account for almost 42 percent of the population. Italy has a population growth rate of only 0.3 percent, which ranks them 171st in the world for population growth. This is an interesting statistic because 80 percent of the country is Roman Catholic. The Catholic Church denounces contraception, however population numbers suggest Italians are using contraception to avoid having children.

Immigration Solution If the country continues to produce minimal birth rates, it will need to rely on an influx of immigrants to sustain its workforce and support its retired citizens who need health care and subsidized income. However Italy's aging population is rejecting the idea of mass immigration, likely because they want to preserve Italy's rich culture. The amount of immigrants needed to support economic growth would have an effect on Italy's spoken language, cuisine and other major cultural norms.

Immigration Problems Immigrants continue to flood Italy's southern island of Lampedusa. Many immigrants are fleeing political oppression and economic strife of countries in Northern Africa, Syria, Asia and sub Saharan African countries. Although Italy's sluggish economy could benefit from a larger labor population, the country detains the immigrants in a large retention camp called the Reception Center of Lampedusa. Originally built for about 800 people, the center now receives more than 50,000 immigrants a year. Most immigrants are males of working age however Italy is struggling to process the large number of people. Italy was shamed by the European Union when it was revealed that illegal immigrants were being stripped naked and hosed down to remove skin diseases and parasites in public. Immigrants are also dying trying to cross the Mediterranean Sea as human traffickers are overcrowding the boats. In 2012 more than 300 people died when an immigration boat caught fire and caused everyone to move to one side of the boat. The vessel capsized and many passengers drowned before help could arrive. Italy has experienced a recent influx of Tunisian immigrants due to the Tunisian Civil War. Aging European laborers will need to be replaced to sustain the continents economy and willing immigrants are readily available to take the jobs however anti immigration sentiments are preventing these people from escaping civil unrest. http://web.archive.org/web/20161016000935/http://www.wikileaks-forum.com:80/italy/67/italys-appalling-treatment-of-migrants-revealed-in-lampedusa-footage/26172/