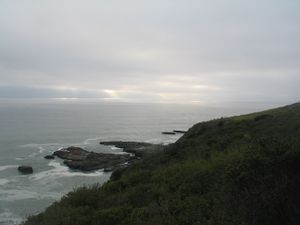 The Intertribal Sinkyone Wilderness Council is a nonprofit and land conservation organization that is composed of ten US federally recognized tribes in the Northern California Area, most notably the Sinkyone area. It was established in 1986 as a means to protect Sinkyone Indian Lands that hold ancestral significance from clear cutting. From this instance, it has since successfully preserved 3,845 acres of redwood forestland along Mendocino County Northern California Coastline[1] which had originally belonged to the Sinkyone Indian Territory and is the first park with ancestral lands to be given back to native hands.[2]

It is the goal of the Intertribal Sinkyone Wilderness Council to preserve and restore Sinkyone cultural lands in the southern Humboldt county and northern Mendocino county areas for future generations. They are also working to facilitate the granting of land stewardship of relevant cultural lands back to the indigenous people of the area. In addition to land conservation efforts, the Intertribal Sinkyone Wilderness Council advocates for:[3]

Elk living in the Lost Coast

• The protection of sea mammals and other marine life, as well as animals whose habitat is within the protected land.

• The revitalization of the Sinkyone culture, and the culture of surrounding indigenous peoples.

• The public education of the importance of sustainable use of land, water and air within Native American beliefs.

• The assurance of local Tribal rights to the access to and the gathering of marine/coastal resources for traditional cultural purposes.

• The protection of the endangered groves of redwood trees in the North Coast.[4]

The Intertribal Sinkyone Wilderness Council is made up of ten U.S. federally recognized tribes that include:[5]

They also collaborate with other conservation organizations, state agencies and local communities and governments. Some supporters include:[6][7]

• The Trust for Public Land

Current projects that the Intertribal Sinkyone Wilderness Council are undertaking include: 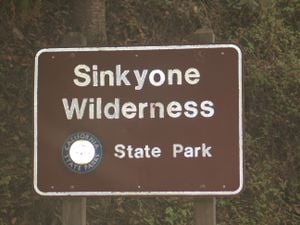 • Working with other organizations and groups to protect the Lost Coast and turn it into a wilderness park capable of being accessed by the public by means of MPAs.[8]

• Connecting trails from the Sinkyone Wilderness Park to other California Parks, to add them to the Park System.

• Opposition to the US Navy North West Training Range Complex that is taking place along the California, Washington and Oregon coastlines.[9] Their opposition is based on the grounds of harmful effects that it will have on marine life. Litigations are still in process.[10]

The Intertribal Sinkyone Wilderness Council has used a variety of media since its creation to garner support for the efforts that they undertake. The most common forms of media that they use are radio, television and magazines from interviews with members of the council.[11] Their most notable and an earlier use of media was the creation of the 1994 award winning documentary entitled "Run to Save the Sinkyone." The documentary depicts the Sinkyone region as being abundant in natural resources and as being capable of supporting one of the largest human populations before the arrival of Europeans to the continent.[12] Since the 1994 release the Intertribal Sinkyone Wilderness Council has been featured in other documentaries.

Though Northern California based, the Intertribal Sinkyone Wilderness Council has also been involved with international relations. The Council was recognized by the World Wilderness Congress and was invited to attend a conference held in Spain in 2013, where they shared the work that they had done for conservation and restoration efforts in Northern California to people working toward similar goals around the world.[13] The Council has also worked with a Tokyo based film company that was sent to film the council’s work on environmental protection initiatives and ecological conservations. The film was then broadcasted over Japan’s satellite television as part of a series of educational documentaries about the land ethics towards indigenous peoples throughout the world.[14] The Council has future plans to work with project groups similar to their own in Canada and in South America, though this is still in the beginning phases.