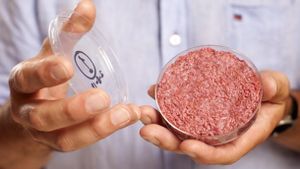 In vitro meat in a petri dish

In vitro meat, also known as test-tube meat, lab-grown meat, cruelty-free meat, or cultured meat is meat grown in a lab with limited use of a living animal. The idea for this source of meat stems from the desire to keep the slaughter of animals out of the meat distribution process[1]. In the past 6 years there have been numerous attempts at spreading the word about in vitro meat as well as attempts to successfully grown some fit for human consumption and testing. PETA has been large supporter of in vitro meat for many years. 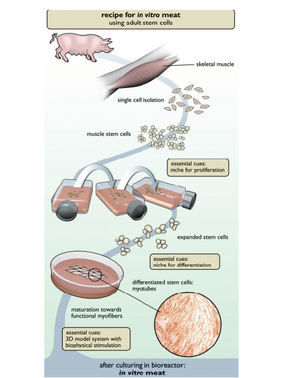 In vitro meat is meat that is grown in a controlled lab environment with limited interaction with animals. Culture cells which are essentially stem cells are taken from a live animal and are put into a culture media where they begin to grow independently from the animal. The four parts of the experiment are the serum or starter cells which are derived from the neck of a cow and collected from a slaughter house, the growth medium or culture media of fetal calf serum obtained from a slaughtered pregnant cow, the material for an edible scaffold upon which the cells can attach, and the bioreactor[2] [3]. The starter cell (mostly skeletal muscle cells) are introduced to a culture pre-formulated for growth along with the edible scaffold the cells will grow around. The whole thing is then introduced to the bioreactor, which is essentially a controlled environment in which temperature and climate is fluctuated to create a fitness-like state for the growing muscle. In this way the cells form tissue very similar to that of natural muscle, with fat and collagen and elastin.[4]Though this may appear to be animal and cruelty free, the cells will not reproduce in perpetuity, resulting continued need for new cells which will perpetuate animal slaughter, fortunately on a smaller scale.

- Cattle and other sources of meat could be completely relieved of the need for slaughter
- Processing meat would be cleaner and more cost efficient
- Fewer chances for tainted meat when the source is a controlled lab growth
- Fewer methane emissions due to the need for less livestock
- Less wasteful overall, only use make what we need
- Chance for cheaper production cost than that of normal meat (with future technology)

- Unnatural, religious implications
- Devaluing of farmers and ranchers
- Currently expensive to produce
- Media loves to criticize it
- Unknown health risks, the product has not been FDA tested or certified[5]

Numerous news agencies have done stories on in vitro meat. Most, including the BBC, go into a bit of detail regarding the creation of the meat. The animal rights group PETA offered a prize of $1 million to the laboratory that could successfully create commercially viable in vitro chicken, as these animals constitute the largest group of factory farmed abuse within the United States, with over a million killed hourly. Though the contest ended on March 4th, 2014 with no winner, PETA sees it as a success because of the strides that have been made in creating meat of all types in the past six years since the contest was announced[6].

On August 5th, 2013 the first lab-grown burger was eaten in London at a news conference. The reactions to the taste a feel of the meat were favourable and hopeful. Testers of the meat were quoted saying, “...it's close to meat, but it's not that juicy. The consistency is perfect.” and “The mouthfeel is like meat. I miss the fat, there's a leanness to it, but the general bite feels like a hamburger.”[7] So far the media has seemed largely unbiased toward this technology but since the science is still in its infancy, expect to see more and more media coverage about it in the near future.

There is still much work to be done regarding the creation of in vitro meat, but the success of the first ever public trial is great news for the science. People actually seeing a finished product, even partly so is sometimes enough to fuel more backing and support and possibly one day soon every household in America can have this new safer form of meat in their homes.