The Igherm Restoration and Library Project is the restoration of a Moroccan Kasbah (or Igherm) for use as a community library. Located in the Middle Atlas Mountains, the village of Amzrai in Zawiya Ahansal, Morocco benefits most from the project that is to be completed by the Fall 2010.[2]

Kristoffer Erickson and Cloe Medina Erickson completed their first project in the Middle Atlas Mountains in the village of Taghia in 2006. The project involved the improvement of a school and trails in the area in partnership with The North Face Athletes and RushHDTV. The success of the project led to the expansion of the partnership's work at request of the surrounding communities. The Igherm Restoration and Regional Library project was established.[3]Partnerships with The Global Living Foundation , the Moroccan National Library, RushHDTV, and The North Face Athletes have allowed American students and professionals to work with "Moroccan community leaders, residents, and government officials resulting in a self-sustaining regional library system, via the preservation of a cultural icon – the Moroccan Kasbah."[4]Cloe Medina Erickson worked with Irherm owner Youssef Jini in September 2007 to discussion goals of the project. The proposal was brought to the 25 collective owners of the site and agreed on.[5] 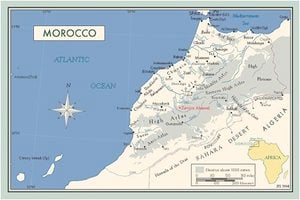 Project Goals as laid out by the Igherm Restoration & Library Project website are as follows:

The project itself is to renovate and convert the Igherm into a community library. The library will provide additional educational resources to expand on government run primary schools, as well as reading material for the community, while generating an income that will cover the structure's maintenance costs.[7] Part of the library is intended to have a Community Room. Dell Computers has donated eight laptops to the library as an addition to this space. The community is currently waiting for books recently requested from the Moroccan National Library by a local group called Amezray SMNID.[8] Details of the actual renovations that have taken place include reestablishment of the foundation, application of exterior earth coating (martoub), assorted stone work that included paving the courtyard with flat stones as well as work on terraces a stone entry way and steps, and the laying of water pipelines.[9] Work on the roof and towers are expected to resume in April 1, 2010.[10]

Igherms were originally used to store grains and as a place of refuge and defense when the village was in danger. For 300 years the Igherm in Amzrai provide a tool for its community, and the renovation will further extend its service.[11] 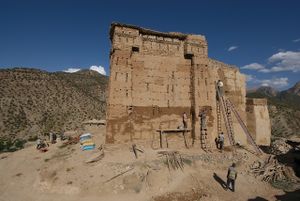 The project will directly benefit 10,000 Moroccan resident in the region. Satistics show that 50% of the country is illiterate. The library will serve as a tool to educate both the locals and tourists that visit the site. The site has a lasting archetectual, cultural and historical heritage that can be maintained much easier.[13]The site also stands as an example only using sustainable electrical energy created through solar power.[14][15]

Montana State University of Architecture is offering a 3 to 6 week course for students to go help continue work in Amzrai.<ref>www.acsa-arch.org/files/store/Web-ACSANewsApril09.pdf<ref>GlobalGiving.com

Page data
Retrieved from "https://www.appropedia.org/w/index.php?title=Igherm_restoration_and_library_project&oldid=651172"
Cookies help us deliver our services. By using our services, you agree to our use of cookies.
Categories:
About Appropedia · Policies · Contact · Content is available under CC-BY-SA-4.0 unless otherwise noted.