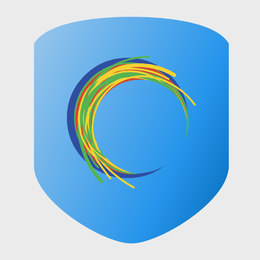 Hotspot Shield is a service that allows users to bypass Internet restrictions through a virtual private network (VPN). This service was started in 2005, and is run by the California based company, AnchorFree[1] It is available through multiple digital platforms such as Mac, PC, Android, and iOS.[1] Hotspot Shield serves over 1.6 billion Internet users globally. [1] This service is free when using their advertising supported service and can be upgraded to their paid Elite service ,which has added security, faster speeds, and no advertisements.[1] Its mission, as stated by company CEO David Gorodyansky, “is to provide freedom to access all of the world’s information for every person on the planet.” [2]

AnchorFree was started in 2005 by, 23-year-olds David Gorodyansky and Eugene Malobrodsky. [3] Both men shared the belief that “all users should be in control of the web” and that “everybody deserves to be secure, free and private online.” [1] Gorodyansky and Malobrodsky were childhood friends and before AnchorFree, they co-founded the company Intelligent Buying Inc. [1]

What is a VPN?[edit | edit source]

A VPN allows users to create a secure connection over the public Internet to private networks at a remote location. [4] It does this through a combination of services such as encryption, tunneling protocols, data encapsulation, and certified connections. [4] A VPN uses these services and masks the users IP address. [4] This is done by exchanging the users IP address with the VPN server’s IP address. [4] By doing this, users receive privacy for online activities and the threat of revealing the users identity, location, ISP, and specific Internet activity is removed. Also, they allow users to bypass regional Internet restrictions, which provide access to content or Internet services that otherwise, are restricted or censored.

This picture diagrams how a VPN is used through Hotspot Shield.

In China, the internet is heavily censored by the government, but users of Hotpot Shield are able to access any and all webpage’s. [5] There are 5 million users per month that get onto Google and 2-3 million a month that access Facebook and YouTube. [5] At one point, China blocked Hotspot Shields website, but users found a way around it. [5] The users would email the product to each other and in response, Hotspot Shield created an email autoresponder that would send a message with the product attached. [5] 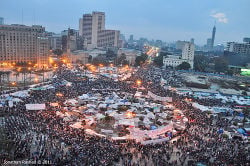 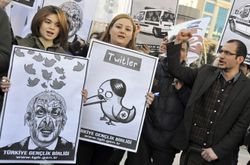 Protesters in Turkey reacting to the ban on Twitter.

In 2011, the Mubarak regime enforced restrictions on mobile and Internet communication. [6] To counteract these limitations, Egyptian citizens started downloading Hotspot Shield so that they could access Internet sites such as Facebook, Twitter and Google. [6] Before the revolution, there were about 100,000 users in Egypt and after the restrictions were placed, there were over 1 million users in Egypt. [6] Later, the Egyptian government completely shut down the internet, but this didn’t stop people, they were able to use their dial up and phone connections to get online and access Hotspot Shield and communicate through social media sites such as Twitter. [3]

In 2011, Hotspot Shield was able to track when the Libyan government would turn off the country’s Internet. [7] During the day, there would be around 30,000 Hotspot Shield users, but in the evenings, there would be zero. [5] The entire country would go dark in the evenings, but there would be users again in the morning. CEO David Gorodyansky said in an interview that his guess as to why this pattern occurred, was that “they would turn on the internet in the morning so oil companies would function, but they would shut it off at night so people couldn’t organize after work.” [5]

Thursday March 20, 2014, Turkish Prime Minister Recep Tayyip Erdogan placed a ban on Twitter. [8] This ban was enforced after allegations of government corruption were shared through the social media site and not removed. [9] After the ban, Turkish citizens and people within the country began using Google’s DNS service which allowed them to directly type in Twitters IP address and access the network rather than accessing “Twitter.com.” [9] This was then stopped by the government and people in Turkey turned to VPNs such as Hotspot Shield. [9] Within 12 hours, Hotspot Shield had 270,000 downloads from Turkish users. [10]

In February 2014, citizens began protesting in the streets of Venezuela. These protests are in response to the governments rising inflation and increased criminal violence. [2] The high-profile murder of Monica Spear, former Miss Venezuela is just one example of the increased criminal violence. In response to the citizen protests, the Venezuelan government has begun censoring parts of the Internet. [2] Twitter was blocked “in an attempt to make the protests seem less widespread.” [2] In March, AnchorFree made the premium version of its iOS app available to those in Venezuela. [2] Venezuelan citizens are very well connected with 83 percent with internet access that use social media, 83 percent owning a cell phone and one third of the population having a smartphone. [11]