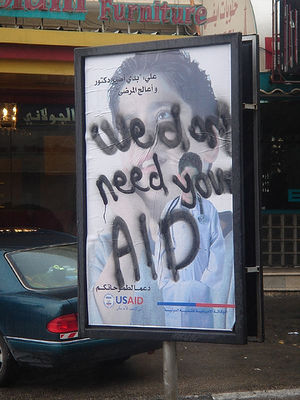 "We don't need your aid" - example of anti-donor graffiti

When donor governments give foreign aid, do they do so on the basis of friendship and altruism? While that is certainly one reason, it’s not the whole story. Focusing only on that motivation leaves our partners filling in the gap with their own often destructive theories. In most cases, a powerful motivation for supporting international development is the desire to live in a safer world. Helping other countries grow healthy and prosperous will makes us all safer. That is a perfectly acceptable reason to give aid.

If we speak honestly about the role of self-interest in international development, it would help us do our work better. It would empower host countries, reduce the idea that aid is basically a bribe to get something from the developing country, and improve community acceptance.

If we’re giving assistance for no reason other than the kindness of our hearts it puts us in a superior position. We’re the wealthy generous people, helping the poor who need our help. It is inherently disempowering to the people we work with – governments, communities, and individuals.

But, if we both have something to offer and something to gain – that is a partnership. Example: Haiti needs peace and prosperity. The US needs Haiti to stop exporting refugees and start buying the stuff we make. We can work together to make that happen. I think this explains, to a large degree, the success of social entrepreneurship. If you take generosity out of the equation, everyone is equal. And equality is a much better place to start.

Many, foreign leaders see the world from a pure cold war realpolitik perspective. They assume that development aid is a quid pro quo and it’s given to win their geopolitical support. They genuinely don’t believe that aid could be given for another reason.

If development aid is just barter for geopolitical support, then it doesn’t matter if the aid projects are effective. It doesn’t matter what kind of work is supported. In fact, it doesn’t need to be development aid at all. It could just as easily be helicopters, weapons, or a new set of gold toilets for the dictator’s palace. Especially in countries where top-level leadership is corrupt, this doesn’t lead to host country support for development efforts.

While increased GDP and national prosperity benefits everyone, plenty of the short term efforts needed to bring that about have losers. Corrupt elites in particular tend to suffer, and they can and will oppose development projects for that reason. Strong support is needed from the host country is required to push past that. Knowing that the donor country values successful development efforts because it’s also dependent on the outcome helps to generate that support.

A caveat. Making donor interest in development clear could also lead to host government efforts to hold aid impact hostage. “If you care so much about regulatory reform, we’ll keep it from happening until you buy seven gold toilets.” But even that kind of gamesmanship is a game that takes impacts seriously, and is a form of empowerment, however unpleasant. And a donor can take the long view and refuse to play.

After the Yogyakarta earthquake in 2006, some severely damaged communities displayed signs stating that only Muslim help was welcome[1] - presumably due to a belief that Western help came with a desire to convert people to Christianity.

Aid and development workers are often asked by community leaders, local government officials, and others why their government (or their employer) is funding the project. They are curious and suspicious. They’ve seen enough American movies not to think Americans (or Westerners) are saintly and loving. There must be a reason for doing something so good. But what is it? Having no clear can lead to suspicion.

Think of the famous case of the Nigerian religious leaders who refused polio vaccines. One possible reason reason for the refusal was that were looking for ulterior motives. Why would Americans want to send vaccines for Nigerian kids? Altruism alone didn’t make sense as an explanation, so they found another – the vaccines causes AIDS and sterility. They had also already been mistreated once by the international pharmaceutical industry, deepening their doubts. What if the American government and agencies had said in the first place "We want your kids to grow up strong and healthy so that they work hard, get rich, buy American products and don’t become terrorists." That’s an ulterior motive that makes sense.