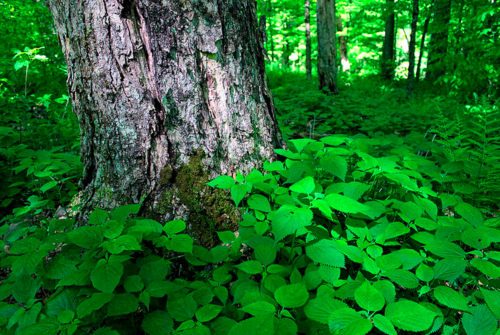 Herbaceous layer in a forest

A herbaceous plant refers to a plant which has a soft stem that is not woody or that lacks a woody stem persisting above the ground.[1]

Many such plants have a short lived existence, such as a single season or a year - these are known as annuals. They will flower, die but leave behind seeds for regrowth.

Other herbaceous plants that are biennial or perennial may have stems that die back while the plant survives either under the ground or close to the ground, to be revived the next warm season.

Non-herbaceous perennial plants are woody and have stems above the ground.[1] Such stems endure above ground during the dormant season, and shoots appear from these parts (trees, shrubs, climbers, etc.).[1]

Herbaceous plants vary considerably in size. While most are on the smaller size, some grow large, such as the banana.[1]

Here are some examples of herbaceous biennials: Carrots, parsnips and common ragwort.[1]

Herbaceous plants have key roles to play in ecosystems such as grasses in a meadow or under-story in a forest.