From Appropedia
Redirected from Banana

The banana is one of mankind's most prized foods. The banana is generally is produced in the tropics and subtropics from plants of the genus Musa W.

There is no such thing as a 'banana tree'. The plant is an herb very similar in structure to the onion. It has absolutely no wood. It is its size that leads people of the temperate zone to call it a ‘tree'. The tallest of the banana varieties can reach 12 to 15 meters (40 to 50 feet) tall. There are over 300 named varieties of this fruit but only a dozen are well known in the Americas.

Popularly, this fruit is divided into two types, the sweet eating type banana and the starchy cooking type, the plantain. Most banana fruit sold in temperate zones are of the Cavendish or Valery varieties, are fairly large with a fairly good shelf life. These varieties, however, relatively lack flavor as compared to the more popular varieties in the tropics.

All eatable bananas are genetically naturally occurring triploids and thus produce no seeds. Diploid bananas produce fruit that is up 80% full of large, hard seeds, and, although the remaining flesh is quite eatable, there's just not enough of it. Mutants of the cooking banana are often used to make banana beer in East Africa, a very popular drink. A seeded banana called abacáW or abaca is the source of the commercial fiber, Manila hempW (not to be confused with true hemp). 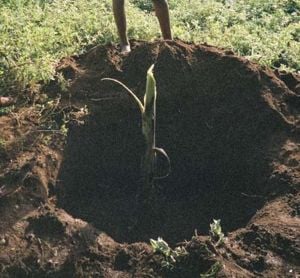 Example of the typical sized planting hole, with a pruned sucker

See Better Farming Series 18 Bananas gives an in depth details on managing bananas. Additional info is added to this below

Banana plants are often destroyed in windy conditions. Wind breaks can reduce the risk of this