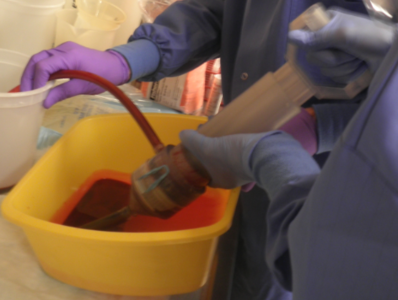 Ruptured ectopic pregnancy is a leading cause of maternal mortality worldwide and women who suffer are often in need of blood transfusions as they lose considerable amounts of blood. Autologous blood transfusion is an important technique used in resource-poor settings where there are often shortages of donated blood. This method essentially involves physically extracting patients’ blood and re-infusing it back into their bodies through a gauze filter. However, this “soup ladle” model is slow, lacks in sterility and filtering efficacy, is labor-intensive, and potentially dangerous for patients, often resulting in complications related to acute anemia.

Hemafuse is a simple and affordable handheld mechanical device that allows physicians to manually suction blood from women’s abdomens, quickly filter out blood clots and impurities, and re-tranfuse it using a standard blood bag. It is a closed, sterile unit, and thus is optimal for handling blood. It also only requires one clinician to operate it rather than 3 or 4 who are required for the conventional autotransfusion method. Hemafuse is made from durable, reusable, and disposable materials that can be sterilized in between patients.

Testing of Hemafuse began in 2011 in Kumasi, Ghana and now is being tested in several in 3-5 tertiary hospitals. The initial target market is Ghana and other sub-Saharan African countries, however, the device will eventually be introduced in Haiti and Cambodia as well.

Hemfause for Blood Salvage by DIIME. (2012, October 15). Maternova: Tools and Ideas that Save Mothers and Newborns. Retrieved November 16, 2012 from here.