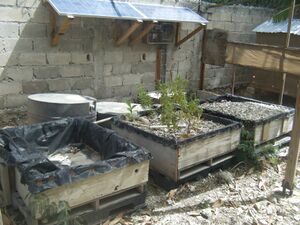 In December of 2011 Ecofficiency built an aquaponics system in Haiti Communitere. The system is comprised of three plant beds and three fish tanks, and each set of plant bed with fish tank cycled water independently of the other two. The same pump cycled water for all three systems. The system was built almost entirely out of local materials either found at Haiti Communitere or purchased nearby. Ecofficiency brought the visqueen plastic lining for the plant beds and the filters to Haiti. The plumbing was purchased at the local Eko Depot. Reclaimed wood was used to build the approximately 14 square foot plant beds. The system supported tilapia fish, and veggies like peppers and tomatoes. When Ecofficiency installed the system the pump was powered by grid electricity. Just under a year after the systems initial installation another group added a solar panel and battery system to run the pump independently of the grid. However, the panel and battery could not provide the pump with a reliable enough energy source, and the system failed. As of July 2014 the aquaponics system was not in operation.

Aquaponics systems are relatively self sufficient when compared to traditional farming, and they require far less inputs like water and fertilizer, but the system will fail if it is not monitored regularly. The fish need regular food inputs, and the pump must be monitored to ensure the water is being cycled, so that the fish may receive oxygen and filtered water. While a solar panel provides grid independence, it does not provide indefinite security for the system. A battery would need to be significantly over-sized to make up for multiple consecutive cloudy days that would inhibit the solar panel from charging the battery. If a solar panel is used in an aquaponics system it should have an emergency back-up power supply, or it should be monitored frequently, and the water should be manually cycled if the battery fails to power the pump.