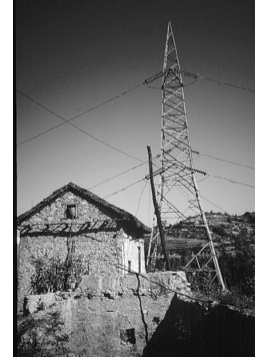 It was in London in 1882 that the Edison Company first produced electricity centrally that could be delivered to customers via a distribution network or 'grid'. Since then electricity has become one of the commonest energy sources for domestic use in the West. Electricity is extremely versatile, clean, easy to use, and can be turned on or off at the flick of a switch. Electricity has brought enormous social benefits in all areas of life. It is the preferred method of supplying power for many household applications, especially lighting, but connection to the national electrical grid is a rare occurrence in rural areas of the developing and under developed world. In the majority of the worlds' poorer countries it is estimated that significantly less than 5% of the rural population are connected to the national grid. There are many reasons, both technical and economic, which make grid connection unfeasible and these will be looked at briefly in this fact sheet. In urban areas of the developing world grid connection is commonplace.

There are other possibilities for providing electricity in rural areas. In many areas where electricity is required and there is no grid within easy reach then a localised grid (or micro- grid) can be established using a local power source such as a diesel generator set or small- scale hydro power scheme. Alternatively, individual households can be connected to stand- alone systems which can be powered by any of a wide variety of energy sources.

The national grid is a network of power lines which allows distribution of electricity throughout all or part of a country. The grid can be connected to a single power source or electricity generating plant but is usually linked with other plants to provide a more flexible and reliable network. The electricity is usually transmitted at very high voltage, typically several hundred thousand volts (depending on power transmitted, national guidelines, etc.) as this reduces losses and means that smaller cables can be used, reducing the overall cost of the network. Bulk electricity is generated and transmitted in 3 phase, alternating current (a.c. - 50 or 60 cycles per second) form and distributed to the consumer as three phase or single phase depending on the end use requirements. Transmission by direct current (d.c.) is also used, losses associated with d.c. electricity being lower than a.c., but other costs are incurred as heavy duty rectification equipment is then needed to supply a.c. electricity to the consumer.

After generation, the voltage has to be stepped up (to a high voltage) for transmission and distribution using a transformer and then stepped down (to a lower voltage) for end use, again requiring a transformer. The step down process is usually done in several stages as the network is reduced in capacity. Typical consumer voltage is 210V or 415 V for three-phase and 120 V or 220 V for single phase depending on national standards. Three-phase electricity is used for higher power equipment such as factory or workshop machinery whereas all domestic electricity supply is single phase.

Electricity is most commonly produced by converting an energy source into mechanical shaft power, which in turn drives a generator which produces electricity. The energy source can vary depending on the available resources. Typical sources include fossil fuels, nuclear fuels (rarely in the developing world), hydro power (a selection of countries producing a significant proportion of total electricity from hydro power; Kenya 63%, Zimbabwe 37%, Peru 48%), solar power, wind power, geothermal, etc. Traditional thermal power generation uses oil, coal or gas to produce heat which in turn is used to create steam which drives a steam turbine. The turbine provides the mechanical power for the generator. Similarly, nuclear power generation uses nuclear fuels such as uranium, which undergo a process known as nuclear fission in a reactor, to provide heat to drive the turbine. Hydropower (which is a very popular source of power in regions where the hydrological and site conditions permit and/or Infossil fuels are scarce) uses the stored or potential energy of water which has a 'head' or height above a certain point. The water is dropped through a turbine which provides shaft power for directly driving a generator. Windpower uses a similar principle but the energy is extracted from the wind to drive the turbine. Geothermal energy is heat energy stored in the earth's crust which can be tapped to heat water for driving a turbine. Solar energy for providing electricity can be derived using one of two methods.

Heat from the sun can be concentrated to drive a steam turbine, or the more popular method uses the photovoltaic principle to convert sunlight directly into electricity. Solar and wind technologies are not used on a widespread basis for producing electricity which is fed into large grid systems, though examples do exist. The grid can be owned privately or by the state and is not necessarily owned by the electricity producer.

The type of fuel source which will be used to provide electricity is dependent upon several factors.

These include the following:

There are many constraints to rural grid based electrification. Firstly there is the question of cost. The cost of grid connection is influenced by the voltage and proximity of the grid and whether there is a step down transformer already serving the area in question. Capital cost of the distribution system is very high and demand in rural areas is very low. Households can be widely dispersed and often rural consumers will want to use only a few light bulbs and a radio in the evening. The cost-benefit relationship shows that there is little incentive for an electricity producing utility to extend the grid into remote rural areas. Often rural regional centres will be electrified but the network will usually stop there or bypass the remoter villagers as high voltage cables passing overhead. The figure below shows the cost of grid connections in relation to load density in rural and urban areas. In poorer communities the cost of house wiring, appliance purchase and electricity prices can also be prohibitive. 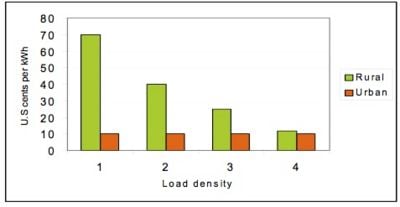 Although introduction of electricity to a community often stimulates income generating activities and hence a gradual increase in the uptake of electricity use, the conditions for introducing electricity do not normally exist in rural areas. Most commercial and industrial activities are concentrated at the regional centres. In many developing countries the existing generating capacity is unable to cope with demand. Black outs are a common occurrence in many major cities, especially as the process of rapid urbanisation continues. The utilities often find it difficult to cope with the existing demand, let alone think about catering for an increased demand from rural areas.

Positive political will and subsidies or loan schemes for rural electrification can remove some of these obstacles but often neither are forthcoming. It seems, therefore, in many countries of the developing world, that little progress will be made if rural communities are to wait for the grid to reach them. In conclusion we can see that an alternative is required. One alternative, which is used widely, is to utilise small diesel generating sets to provide electricity for local networks (see other sheets for more information). Another alternative, (see above), can be found in the form of decentralised power generation using renewable energy technologies.

Electricity is an extremely versatile, clean and user friendly form of energy. There is an almost limitless range of applications for electricity. Electrical motors provide shaft power that can be used for a multitude of industrial and agricultural activities, as well as for transport. Batteries allow electricity to be stored for periods when it will be required. In a rural context, electricity has many uses. They include some of the following:

The social impact of introducing electricity to a region is enormous. There are the obvious benefits of improved social services; lighting at health centres, hospitals and schools, refrigeration of vaccines, etc. There are other social gains such as street lighting, cinema and television, community services such as milling of grain, sawmills or battery charging (often an alternative to grid connections).

There are also less obvious benefits. The status of a community is raised enormously in the eyes of the rural inhabitants when electricity is introduced. This helps to stem the flow of rural urban migration which is common in many developing countries. Many young people head for the 'lights' of the big cities as soon as they are old enough and introducing electricity has the tendency to stop this exodus which is creating huge problems in many countries. The introduction of electricity often helps to create productive employment in rural areas and there is a positive impact on economic as well as social growth.

As mentioned earlier, one of the main obstacles to national grid connection in remote rural areas is the prohibitive cost of the distribution network. One way of avoiding these costs are to decentralise the power generating capacity and install local small scale, low voltage grids, otherwise known as micro-grids. This tends to be the main thrust of the work being carried out on rural electrification in the developing world at the present time. Localised grid networks allow local, renewable resources to be exploited. Energy sources such as small-scale hydropower, solar (photovoltaic), windpower and biogas are all being employed successfully in rural electrification projects in the developing world. (More information about these technologies can be found in other fact sheets in this series). Decentralisation of generation also allows control of the system to remain in the hands of the users and removes the dependency on external supplies and market forces.

Emissions from fossil fuel burning are causing environmental problems worldwide. Governments are now trying to reduce these emissions to bring them into line with projected global emissions guidelines. There are also environmental concerns associated with the extraction and transportation of fossil fuels. Large dams for large-scale hydropower are also attracting attention due to their negative environmental and social impact. See the Practical Action paper 'Small is Powerful - Appropriate Hydro in Nepal' and 'Silenced Rivers' by Patrick McCulley for more information on this topic.

Where grid connection is an option, be it to the national grid or a micro-grid, then one method of making it an affordable option is to keep the connection costs and subsequent bills to a minimum. Often, rural domestic consumers will require only a small quantity of power to light their houses and run a radio or television. There are a number of solutions that can specifically help low-income households to obtain an electricity connection and help utilities meet their required return on investment. These include:

Load limited supply. Load limiters work by limiting the current supplied to the consumer to a prescribed value. If the current exceeds that value then the device automatically disconnects the power supply. The consumer is charged a fixed monthly fee irrespective of the total amount of energy consumed. The device is simple and cheap and does away with the need for an expensive metre and subsequent meter reading.

Pre-fabricated wiring systems. Wiring looms can be manufactured 'ready to install' which will not only reduce costs but also guarantee safety standards.

1Credit. Credit schemes can allow householders to overcome the barrier imposed by the initial entry costs of grid connection. Once connected, energy savings on other fuels can enable repayments to be made. Using electricity for lighting, for example, is a fraction of the cost of using kerosene.

Community involvement. Formation of community committees and co-operatives who are pro-active in all stages of the electrification process can help reduce costs as well as provide a better service. For example, community revenue collection can help reduce the cost of collection for the utility and hence the consumer.