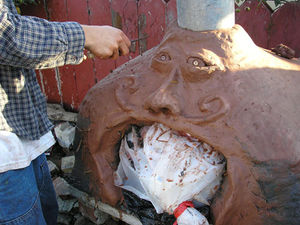 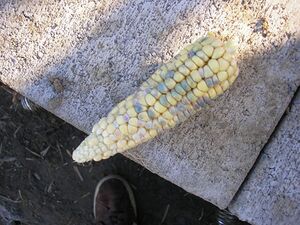 At the begining of the semester our group was going to do a different project. We were going to help redesign the oncampus composting program at Cal Poly Humboldt, emphasizing the dorms. Our clients were plant ops, Campus Center for Appropriate Technology (CCAT), and the on campus recycling program (CRP). At the begining our clients were very intersted in our help, and we collaborated in a few meetings, but for some reason our attempts to make further meetings and to begin were ignored until the begining of October. We were told of a scheduled meeting at the last minute and at the meeting we were told that they decided to do the project at a later date. We had less than a month left to do the project and we were lucky enough to find someone who wanted a new Cob Oven.

Our new clients became the residents of "the Garden House" in Arcata, California. Our main contact was Greg (one of the residents) who told us exactly what he envisioned. Greg explained that the existing Cob Oven was too small and inefficient. He envisioned a larger cook area, chimney, stove underneath (to keep the fire going while cooking), and a coil for heating water for a possible hot tub in the future. The following is a journal of pictures that shows our process.

How appropriate was this project?

With any project that one may complete, there will be some aspects that are more appropriate than others. Building a cob oven out doors in Arcata, California is a little bit of a risk. Arcata is in a very wet climate. So a structure that is made of clay, sand and hay may be slowly eroded with time. If the cob oven had been built in doors or if we were to build a structure to house it then the project would have been more appropriate. Another factor to consider is fuel consumption. To heat the cob oven to a temperature warm enough to cook in takes a lot of fire, which takes a lot of fuel. Once heated the oven will stay hot for hours. In order to offset this it is probably best to use the cob oven when planning to bake more than just one meal. Also we had to drive all over town to get the hay, clay and sand. One way we offset this was by reusing the cob from the old oven, we recieved some donated cob supplies from another person's project, and whenever we could we got local supplies. As sort of a side project we incorporated the 3/8ths inch copper coil so that the residents of the garden house could heat water with some of the waste heat. The residents plan on using the heated water for a hot tub in the future.