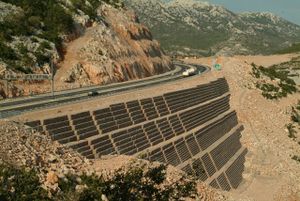 A gabion is a cage, cylinder, or box filled with rocks, concrete, or sometimes sand and soil for use in civil engineering, road building, and landscaping. For erosion control, caged riprap is used. For dams or in foundation construction, cylindrical metal structures are used. Gabions originated in medieval siegeworks. Leonardo da Vinci designed a type of gabion for the foundations of the San Marco Castle in Milan.[1] 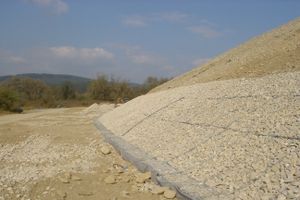 Bank protection made with mattresses in Vrtižer, Slovakia.

The most common civil engineering use of gabions was refined and patented by Gaetano Maccaferri in the late 1800s in Sacerno, Emilia Romagna and used to stabilize shorelines, stream banks or slopes against erosion. Other uses include retaining walls, temporary flood walls, silt filtration from runoff, for small or temporary/permanent dams, river training, or channel lining.[2] They may be used to direct the force of a flow of flood water around a vulnerable structure.

Gabions are also used as fish screens on small streams. Gabion stepped weirs are commonly used for river training and flood control; the stepped design enhances the rate of energy dissipation in the channel, and it is particularly well-suited to the construction of gabion stepped weirs.[3]

A gabion wall is a retaining wall made of stacked stone-filled gabions tied together with wire. Gabion walls are usually battered (angled back towards the slope), or stepped back with the slope, rather than stacked vertically.

Gabion baskets have some advantages over loose riprap because of their modularity and ability to be stacked in various shapes; they are also resistant to being washed away by moving water. Gabions also have advantages over more rigid structures, because they can conform to subsidence, dissipate energy from flowing water, and drain freely. Their strength and effectiveness may increase with time in some cases, as silt and vegetation fill the interstitial voids and reinforce the structure. They are sometimes used to prevent falling stones from a cut or cliff endangering traffic on a thoroughfare. 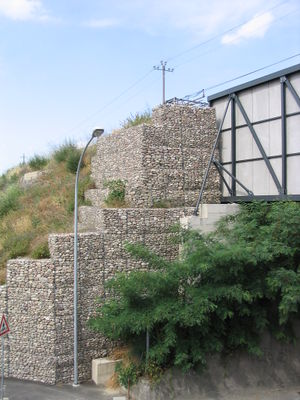 In the United States, gabion use within streams first began with projects completed from 1957 to 1965 on North River, Virginia and Zealand River, New Hampshire.[6] More than 150 grade-control structures, bank revetments and channel deflectors were constructed on the two U.S. Forest Service sites. Eventually, a large portion of the in-stream structures failed due to undermining and lack of structural integrity of the baskets. In particular, corrosion and abrasion of wires by bedload movement compromised the structures, which then sagged and collapsed into the channels. Other gabions were toppled into channels as trees grew and enlarged on top of gabion revetments, leveraging them toward the river channels.

Gabions have also been used in building, as in the Dominus Winery in the Napa Valley, California by architects Herzog & de Meuron, constructed between 1995 and 1997. The exterior is formed by modular wire mesh gabions containing locally quarried stone; this construction allows air movement through the building and creates an environment of moderate temperatures inside.[7][8]

There are various special designs of gabions to meet particular functional requirements and some special terms for particular forms have come into use. For example:[9]

Page data
Retrieved from "https://www.appropedia.org/w/index.php?title=Gabions&oldid=633459"
Cookies help us deliver our services. By using our services, you agree to our use of cookies.
Category:
About Appropedia · Policies · Contact · Content is available under CC-BY-SA-4.0 unless otherwise noted.