In some scenario of human underwater activity, it is too dangerous for crew members to manipulate the underwater vehicle. At this circumstance, underwater unmanned vehicle (UUV) is needed. To maintain the stable movement of the UUV, a robust control system is specifically needed. One of the most mature control system for UUV uses PID control as feedback control. PID control is an autonomous control method, it provide robust control against disturbance. However, PID control is not optimal for UUV, since it’s a passive control method. Thus, fuzzy logic control system will be introduced in the feedback system for UUV to create a fuzzy interference system (FIS). Fuzzy logic control system is an expert system. Based on preset rules, it can provide well planned solution according to real time input as parameters. However PID still have mature solution against disturbance and dealing with oscillation problem, considering this, PID control method will be used as one subset for the FIS sets, especially when desired stats is quite close to current states.

In this project, we will use Mamdani type of FIS,[1] creating state space model for UUV and define fuzzy controller. And pure PID control system will be compared to this FIS as a result.

Block Diagram of the Model. Picture by Phaneendra Nalla. 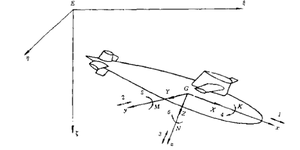 The origin of the fixed coordinate system E, can be placed to any point on the planet, the plane E-ξη is parallel to the horizontal plane, the axis E-ζ is perpendicular to the plane E-ξη and point to the earth’s core.

The origin of the coordinate system, G, is placed on the center of gravity of the UUV. The axis Gx, Gy, Gz are intersection lines between horizontal plane, sheer plane and transverse cross-section plan, respectively.

This paper introduces general fuzzy logic control method for a submarine moving in plane parallel to the earth surface. Paper give both simulation in ideal situation with no disturbance and in presence of sea currents.

Paper give brief introduction of concept of fuzzy logic control method, describe it as 'expert' system, and brings fuzzy interference system (FIS) into the control system of submarine. As one of FIS system, Mamdani type of FIS system is used in this paper.

Then, accordingly, desired state model is built to give the difference as input. As core content, paper define three stage for fuzzy controller system: input stage, processing stage and output stage. For input stage, according to the submarine model, heading error and heading rate are used as input data. For output stage, rudder deflection is considered as output data. All these three data are fuzzificated into variables of membership functions according to the table of 'Member functions of variables'. Then rules are define for each vector of fuzzificated inputs. Totally, the number of rules should be: (number of membership function)^(number of inputs). After rules are set, output can be searched accordingly. At last output should be defuzzificated into executable data.