From Appropedia
Redirected from Frost pockets

This article discusses considerations in windbreak design. The main focus is windbreaks to create a favorable microclimate for a temperate climate forest garden. This situation is one of the main reasons windbreaks are relevant to sustainable agriculture in the West, particularly in view of climate change. However windbreaks have a wider relevance in industrial agriculture settings such as agroforestry and animal husbandry, and the technique can be easily applied to other climates.

Global wind patterns are created by 2 main factors: 1. the uneven heating of the surface of the Earth (Tropical regions are heated more than polar regions, caused by the curvature of the Earth), and 2. the rotation of the Earth. Air at the equator is heated, becoming less dense. Air would tend to rise in the equator and move towards the poles, then cooling, becoming more dense and sinking again and moving back towards the equator. This convection system is termed a cell. However, due to uneven distribution of land and ocean and the rotation of the earth, there exist 3 such cells per hemisphere (Polar, Ferrel and Hadley cells). The polar and Hadley cells are temperature driven cells, whereas the Ferrel or mid-latitude cell is caused by an interaction of the polar and tropical cells. The earth's surface moves faster at the equator than near the poles (the axis of rotation). Therefore as air moves away from the equator it is also under the influence of the Earth's anticlockwise rotation, so it does not move in a straight line but in a curved direction to the right in the northern hemisphere and to the left in the southern hemisphere. This is termed the Coriolis effect, and gives rise to the "westerlies" and the "trade winds". Air rising and falling within these cells also hugely influence the climates of the world by the creation of semi-permanent areas of high and low pressure at particular latitudes, dictating the degree of precipitation and therefore the distribution of deserts and rainforests.

Take the example of the British Isles, which are within the northern hemisphere's Ferrel cell. The suface wind would be southerly, but due to the Coriolis effect, typical prevailing winds are from the south-westerly or westerly.[2]

There is a variation in mean annual wind direction on a regional level, due to large scale topography such as coasts and mountainous regions. The simplest example is the sea breeze. The sea/ocean takes longer to warm compared to land. This leads to a difference in how much the surface air temperature between sea and land. As the air over the land is heated, it becomes less dense and rises, creating low pressure. The surface air over the sea is relativley cooler and denser, and there is movement of air from the high pressure area to the low pressure area. The direction of the sea breeze is reversed at night. Breezes over lakes or seas are approximately twice as strong as land breezes. The direction of these are reversed at night.[3] Another example is the Foehn effect. Air approaching an elevated area is forced upwards, where is cools and becomes less dense due to lower atmospheric pressure at higher altitutes. Smaller scale topography is also very important on local wind conditions.

Again taking the example of the British Isles, high ground over Wales, northern England and Scotland leads to Smaller topographical features have an even greater effect on prevailing wind. However, the prevailing wind is also greatly influenced by seasonal variation. North-easterly winds are as common than southwesterly winds in spring (in some years considerably more common).[4] 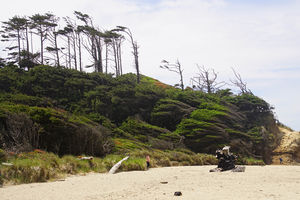 Generally speaking, gentle wind is beneficial for plants, but as wind speed increases this quickly can cause detrimental changes.

Respiration - Respiration increases as wind increases, and this may be related to the mechanical stimulation of the plant.[3]

Pollination & Seed dispersal - Some plants are wind pollinated, and some plants require wind to disperse their seeds. The activity of insect pollinators is hampered by high winds.[7] European bees will not fly in windspeeds of 24 km/h, and flowers in sheletered location receive more bee visits than flowers in exposed sites.[7] Without successful pollination, some plants will not fruit or produce a poor yield (e.g. fruit trees). Wind exposure seems to often be a strong factor in dermining whether a seed germinates and grows in a location.[3]

Growth - Still air is detrminental to plant growth.[8] Wind sway has been shown to result in thicker stems and trunks.[3] Plants also tend to be slightly shorter under the influence of wind.[3] Chronic exposure to strong winds causes unbalanced growth (e.g. see: "Krumholz"W).

Pests & diseases - Still air is known to promote many plant diseases.[5] In still air, particularly in high humidity conditions, moisture can persist on leaf surfaces. This acts as a vector for fungal and bacterial diseases, as spores can stick more readily and linger long enough to infect the surface.[9] Insect pests may be more able to locate plants in low wind conditions, while beneficial insect species that predate plant pests may be hampered by strong winds.

Mechanical Damage - If wind speed is too high, shoots and stems may be broken (e.g. see "lodging"W), and extreme wind speeds uproot trees or seriously damage their root systems (see "windthrow"W).[3] Woody plants exposed to too much wind can get wind scorched, which is dessication of leaves and shoots caused by water loss under strong wind and high temperature conditions.[5] In colder areas, if the water in the soil is frozen the plant cannot replace water losses in high wind conditions, and similar damage may occur.[5]

Soil erosion - Land deforested for arable or pasture land may undergo soil erosion under the influence of wind exposure. This fundamentally alters the resulting ecosystem and is a large global problem.

Windbreaks may be considered according to their purpose as either Field windbreaks (for crops), Livestock windbreaks and living snowfences (create snow drifts in predetermined locations).[1]

Windbreaks around a house can exist in the form of hedges, gabions (filled with stones or plant leaves), wattle fences or walls (stone, soil, etc).

Wind approaching a windbreak is termed the approach flow, it has a direction and a windspeed. As wind encounters a porous windbreak, some of the wind is lifted over it and some of it filters through it.[10] The wind speed is reduced and the energy is partially transferred to kinectic energy of the movement of trees.[11] In a non-permeable windbreak all of the wind is deflected over the top (see: Density). Distinct zones are described in the lee of a windbreak:

In the lee of a shelterbelt, the following microclimate is produced:

The microlimate that windbreaks create brings particular advantages depending on the use of land.

In agroforestry science, 7 structural elements are said to influence windbreak effectiveness, namely: Height, density, orientation, length, width, continuity/uniformity and cross-sectional shape. There are a few other issues to dconsider such as frost pockets and rain shadow.

Windbreaks work best when they are orientated perpendicular to the prevailing wind.[20] However the direction of wind changes, and so it may be beneficial to orientate windbreaks along 2 axes ("legs"). Some advise that a forest garden site should be bounded by windbreaks in all directions.[10]

The advised ratio of length to height should be over 10:1. This reduces influence of end-turbulence and allows best efficiency in terms of area of protection.[20]

In terms of wildlife habitat, it is known that the wider the windbreak, the more diverse the wildlife ecosystem it can support.[12]

Plants vary in their response to frost. Frost reduces availability of soil moisture for plant roots to replace water loss by transpiration.[5] Generally speaking deeper rooted plants are less vulnerable to frost damage compared to shallow rooted plants, because deeper roots extend below the frost line.[5] Sometimes newly planted or shallow rooted plants can be lifted up slightly by expansion of water in soil as it freezes.[5] Cell sap expands when frozen and may cause plant cell walls to be destroyed.[5] Repeated freezing and rapid thawing can be particularly damaging to roots.[5] New, spring growth is vulnerable to late frosts,[5] e.g. by damaing blossom of fruit trees such as peach, preventing successful pollination,[16] and therefore decreasing yield. Tree bark can be split open by freezing and thawing on the equator facing side of the trunk (see frost crackW). Black frost (also termed "killing frost") refers to the necrosis of plant tissues due to frost damage.

Sometimes what appear to be more sheletered sites can be at higher risk of hard frosts.[16] As air temperature drops during night or cold weather, it becomes less dense and therefore sinks. Cold air will therefore tend to flow down slopes and accumulate in the lowerest point, e.g. the bottom of a valley or a hollow. Barriers such as banks, hedges, walls and fences will influence the movement of cold air. To visualize how cold air behaves, imagine pouring thick fluid over the landscape. If a barrier exists which prevents the cold air from flowing away, a frost pocket is formed.[16] In frost pockets, frost will be more severe and persist for longer in the day.[10]

The rain shadow effect is where there is less rainfall immediately downwind of a barrier such as a windbreak (relative to prevailing wind direction).[5] This effect is far more pronounced with impermeable windbreaks, and the area of relative dryness is also proportional to the height of the windbreak.

Use trees or shrubs that will reach the desired height when mature. This elimates any need for trimming or cutting.[10]

Choice of species should also strongly take into account suitability of local conditions (e.g. soil type, pH, fertility, water availability, hardiness zone, etc.). Use of multiple different species in a windbreak increases the ability of the windbreak to function in a variety of different weather conditions, and be more resistant to disease and pests, which will tend to cause much greater problems in any monoculture.

Deciduous trees provide a less dense windbreak during winter, which is potentially when windy weather is more likely.

Non-native species are sometimes used in windbreaks, e.g. because of their fast growth or tolerance of local conditions. However, this may harm local ecosystems if the species become invasive.

The speed of growth of trees used in windbreaks is important. The faster the rate of growth, the more quickly the windbreak will become established and provide the desired benefits. Generally speaking however, faster growing trees have brittle wood, and reach useful lifespan earlier (e.g. 20 years), are more prone to insect damage and disease.

Lists of selected tree and shrub species suitable for use as windbreaks in the UK climate are given in appendix 2 of "Creating a Forest Garden."[10] Plants for a Future have several detailed lists on a range of options for UK climate.[2][3][4] Advised species for Natrona County, Wyoming are given in this booklet by the Natrona County Conservation District.[5]

Windbreaks can offer wood. One example used a system of 3 windbreaks of 2 rows of trees each. One row from one of the windbreaks was harvested each year on a 6 year rotation, without completely removing the shelter function.[11]

Page data
Retrieved from "https://www.appropedia.org/w/index.php?title=Windbreaks&oldid=634648#Frost_Pockets"
Cookies help us deliver our services. By using our services, you agree to our use of cookies.
Categories:
Maintenance categories:
Comments
Privacy policy · About Appropedia · Disclaimers · Mobile view · Content is available under CC-BY-SA-4.0 unless otherwise noted.
</html