Forest Garden No. 2 at Nature's World 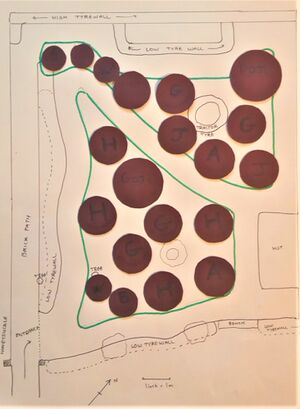 Nature's world was an eco visitor attraction in Middlesbrough, UK. It had various themed gardens and educational features, and closed to the public in 2013. Parts of the site are now managed by a volunteer group. The site also hosts the offices of Middlesbrough Environment City (see: https://menvcity.org.uk/). General aims of the volunteer group are a balance between stewardship of habitat to promote wildlife diversity, and restoration of original form of the gardens. The gardens are open to the public on specific days for education and leisure events. 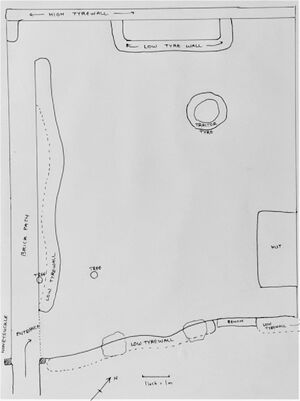 One of the many themed gardens, the Tyre Garden was presumably to demonstrate recycled utility of car tyres in gardening.

SOIL: appears to have moderate clay content, but does not show impeded drainage and waterlogging. Fertility is assumed to be high given the wild growth and several years without cultivation.

SHADE: most areas of the plot are in some degree of shade given trees are present on all sides. The ground next to the SW and SE edges is most shaded. The open ground in the centre of the plot receives more sun, especially towards the N of the plot around the region of the tractor tyre, as well as the N ends of the NW and NE edges.

SPECIES: The tyre garden had become markedly overgrown and it is assumed many of the original plantings had disappeared. "Weeds" such as wild blackberry, stinging nettle, etc. predominated. Limited knowledge prevented identification of many plants, but buddleia, elder, lemon balm, sedum could be identified. Opportunistic trees such as ash and hazel had self seeded and the site was beginning to undergo succession towards woodland. Many bird species and squirrels are present.

Forest gardening is a sustainable form of agriculture without many of the problems associated with industrial agriculture. As such, it is not the intention to completely destroy habitat but rather replace it with artificial habitat that is more useful to humans, while not being too disruptive to surrounding wildlife.

Tyres are often cited as useful recycled containers to grow food, particularly potatoes. They are dark, an added benefit in the UK climate as this increases heat absorption from sunlight, boosting the temperature of the soil within. However, the extent by which contaminants (notably lead and microplastics) from used tyres leach out into surrounding soil, and how these harmful and potentially carcinogenic substances might be concentrated up food chains is not fully understood. In the opinion of the author, enough is now known that the practice of growing food in tyres should be done with caution.

Consequently, the decision to remove tyres from the majority of the plot was made. On the other hand, the complete removal of so many tyres form the site was not easily achievable, tyres have already been present for many years, and recycling is also an important consideration. As a compromise, most of the tyres are to be used in a high tyre wall on the NW edge of the plot, and to add to other tyre walls already present. These tyre walls can provide growing space for plants which will not produce food for humans (e.g. foxgloves, lavender). Where new tyre walls are to be created, they will be underlaid with natural fibre carpet to delay contact with the soil. Most tyres were car tyres of varying sizes. The largest tyres can be used in the lower courses to increase wall stability, and metal wire interwoven to tie it all together. Unwanted bricks, rubble, wood and leaf litter can be used as filler inside the tyre walls (also removing the problem of having to find a use for these materials). In the process of levelling the paths and beds, some soil is also available to place in the top course of tyres to provide immediate growing space.

There is a very large tyre (approx. 1m diameter) which forms a raised bed containing no identified useful plants. Originally a woody perennial grew here, but it is now dead and cannot be identified. The tyre is painted white, which may reduce heat absorption to the bed. It is too large to easily move and so was left. A good plant for this raised bed would be lavender. It will not provide food for humans, but will have a pleasant scent and act as forage for bees. The shrub does not get too high, and so will not overshadow surrounding plants too much, as it is already an elevated position.

Main pathways around perimeter and the pathway dividing the plot into 2 main beds.

In permaculture, it is suggested that paths and beds be laid out to maximize growing space and minimize wasted space on access paths. This "keyhole" arrangement mimics tissues found in organisms and is optimized for surface area for transport across membranes. However, the tyre walls themselves act as growing space will need to be accessible and so a perimeter main path of 1 m width was chosen. Paths are created as follows. Most "Weeds" are removed by hand for composting. The ground is roughly levelled. Natural fibre carpet is laid down. Wood chip mulch is laid on top. This mulch is made from conifers and is unsuitable to place on beds directly but it will be suitable for paths. It is anticipated that these paths will not require any maintenance for several years. Another major path of 1m width could also divide the site, running roughly East-West, providing maximum sun to the south side of the more northern bed.

The NW tyre wall with raised bed. Cane fruit are trained along wires against the vertical face of the wall.

Methods of allowing access all around each shrub in the bed.

There will be 1 raised bed built into the NW tyre wall. This will likely contain something like Jerusalem Artichoke which would otherwise disrupt other plants. This raised bed will also brace the tyre wall. There is another small raised bed formed by the large tractor tyre.

The layout of the main paths will divide the site into 2 large beds. Beds will be constructed as follows. All large "weeds" will be removed by hand for composting. The beds should not be walked on too much during this time, to prevent soil compaction, particularly during wet weather. Instead, a plank of wood could be used to walk over the beds during construction. Initially these beds will be sheet mulched with carpet to kill off the root systems of perennial "weeds". During this time, shrubs could be planted via holes cut in the carpet. In time, the carpet could be removed to allow groundcover to be planted, or alternatively further holes could be cut in the carpet to allow other plants to be introduced with minimal need for future weeding. Where carpet is to remain, it would be visually better to place a woodchip mulch on top. Unfortunately the only woodchip mulch currently available is mainly from conifers and as such will likely be too acidic to be used on beds.

In the finished beds, it is planned that people should easily be able to walk around each bush without difficulty. Ways to facilitate this are to leave narrow mulched areas unplanted around each bush, or use flat paving as "stepping stones".

Normally in forest gardening, several layers or strata are utilised. It is a common observance in mature forest gardens that they have been too densely planted and the productivity and diversity of subcanopy layers declines significantly over time.

This plot is already shaded by surrounding trees and space is fairly limited. As such, it is likely that only 1 or maximum 2 trees of small to medium size could be included without becoming too shaded in the future. Most of the site will therefore have fruiting shrubs with no tree layer above. Consequences of this will be increased light availability and continued productivity of the shrub layer, herbaceous perennials and groundcover layers. Furthermore, this will provide a much quicker maturation time from planting to first yields. It is also anticipated that this design approach will be a more useful demonstration to visitors, most of whom will only own gardens of a similar size.

The exact choice of tree(s) has yet to be finalized. Considerations include: size (not too big), provide food not already present in the wider Nature's World site (e.g. another apple tree is not really needed), and respond well to being "high pruned" to create space for shrubs underneath. 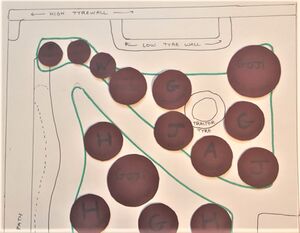 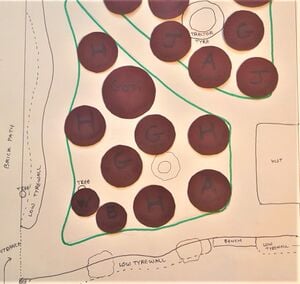 Some of the shrubs available are thorny. Ideally these will be planted in the centre of beds and not directly adjacent to main paths. Otherwise shrubs are to be laid out in terms of shade tolerance. Where possible they should not be placed immediately next to each other to lessen susceptibility to pests and disease. Shrubs available for planting:

Desired shrubs yet to be acquired:

There are various options with cane fruit. The most productive would be to train them in a post and wire system, or against a wall. Another approach is not to train them and to allow them to grow more freely beneath and around bush fruits. The raspberries are perhaps unsuitable to be used like this because they will quickly take over beds. Finally some of these could be trained up the trunks of trees as a vertical layer. Currently it is planned to train most of these against the NW tyrewall to use this otherwise wasted surface. This surface should get a bit of sun due to the adjacent path, and heat will radiate back from the tyres creating a microclimate. Several Rubus spp. and hybrid berries are available for planting:

Yet to be acquired:

Labour is on a volunteer basis. Most plants are to be donated. Many materials are sourced from pre-existing on site resources (e.g. woodchip mulch). Unwanted carpets were recycled. Total financial costs are mostly on a few plants that were not to hand, and a few other materials such as wire.

Government policy regarding the SARS COV-2 outbreak meant that for most of a year no work was possible on the site. Before closure, the situation was as follows:

Upon lifting of relevant Government restrictions, access was permitted to the garden from April 2021. The situation was as follows:

Work carried out since re-opening: 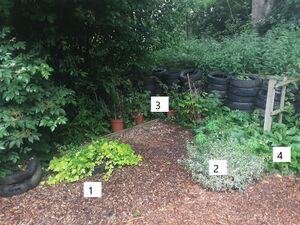 NW corner of the garden. (1) unknown climbing/creeping plant. Beehive present in this tyre - left in position. (2) unknown plant. (3) several potted Rubus spp, unfortunately, now mixed together and cannot be identified. The one in the largest pot is a thornless blackberry. The others are hybrid berries and raspberries. (4) bed of some type of comfrey. Note, in this bed a few Rubus cultivars have already been planted, do not confuse them with wild blackberries (i.e. brambles) which should not be there. The original plan was to create wires along the tyre wall onto which the Rubus could be trained.

Photographs were taken in Summer 2021 to help future volunteers understand the planting schemes. Unfortunately, identity of several plants was lost as several months passed without access to the garden, and plants had been repeatedly moved while waiting for planting. To identify, wait until fruiting. 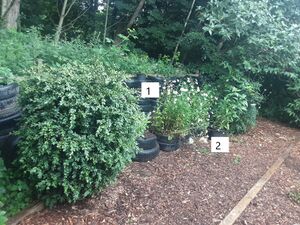 The North edge of the garden, showing the raised bed (1), which is unfinished. It could be filled with compost and then sheet mulched with cardboard to kill off weeds. (2) Jerusalem artichokes waiting to be planted. Please water until planted, optional to remove flowers so plant uses energy for tuber formation. When ready to plant into bed, consider digging out the tubers and separating them widely in the bed, there will be many tubers. The lower tyre wall which forms the front of the raised bed is mostly already planted. 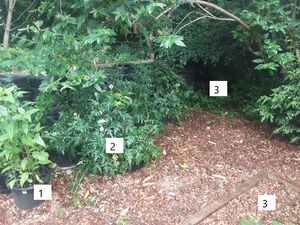 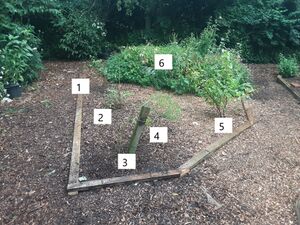 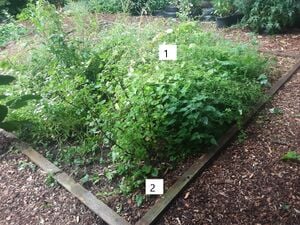 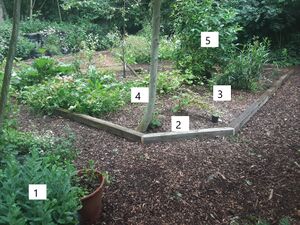 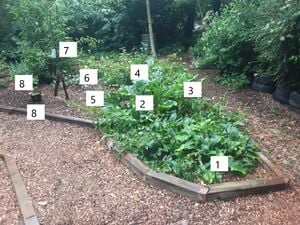 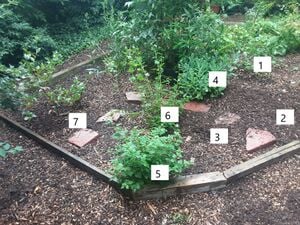 Final works yet to be carried out / ongoing maintenance:

Page data
Retrieved from "https://www.appropedia.org/w/index.php?title=Forest_Garden_No._2_at_Nature%27s_World&oldid=666449"
Cookies help us deliver our services. By using our services, you agree to our use of cookies.
Categories:
About Appropedia · Policies · Contact · Content is available under CC-BY-SA-4.0 unless otherwise noted.