Finland is the third largest renewable energy user, over a quater (34.3%) of their energy comes from renewable sources.[1] The Finnish energy policy is based on the National Climate Strategy of 2001 (which was updated in 2005 and 2008). This strategy is based in setting up guidelines up until 2020. The focus is also on long term planning, up to even 2050.[2] It is based around the Kyoto Protocol.[1] 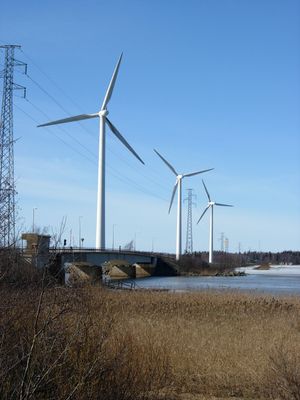 Energy efficiency is pushed forward by the state-owned company Motiva and public-funding for the development of new technologies is most distributed through the Finnish Funding Agency for Technology and Innovation Tekes. [4]

In December 2013 it was announced that the city of Salo will switch on Finland's largest solar power plant to full capacity in March 2014. [5] [6] Salo's plant is not only the largest plant in Finland, but it makes all of the other plants tiny in comparison. There are over 1,000 solar panels on the premises and they will gain so much power that they will go into the city's grid and power a business center.[6]

Only about two thousand households in Finland use solar power, as of December 2013. However, due to some legislation in 2012 electricity gained out of a solar plant can be put into the national grid and will help solar power to gain momentum.[6] 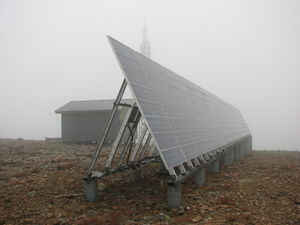 Finland does have the ability to be a really great source of energy despite the cold weather and overcast days. According to the head of the new facilities in Salo, Anu Areva, "In winter for example, it’s good for solar panels to have a cold environment. In March when it’s very sunny, we get a lot of electricity." [6] Areva explained that if the solar panel's temperature gets too high then it will become less effective, so Finland's colder weather may be even more effective than hot and sunny places. [6]