The Beachgrass Baler was designed for the Friends of the Dunes organization by team FWBTD (George Corbett, Zander Kurnizki, Justin Thomasson, and Marina Yurchikov). The team was tasked with re-purposing the abundance of invasive European beachgrass, which is periodically removed from the dunes by volunteers. The Baler provides a means of organizing the waste beachgrass into tidy blocks, thereby making it more convenient to transport and to use as one would use a bale of conventional straw.

Friends of the Dunes is a non-profit organization based in Humboldt County. The organization is focused on coastal ecosystem restoration and community education. As part of their restoration mission, Friends of the Dunes is working to eradicate the invasive European beachgrass (Ammophila arenaria). The grass was originally planted in the area, and all along the west coast, in the early 20th century as a sand stabilizer. However, as this non-native species spreads, it crowds out native plant species and compromises nesting areas for local birds, thereby negatively affecting biodiversity. Thus, Friends of the Dunes works to eliminate this species. Volunteers manually tear out the beachgrass, leaving it in piles along the dunes, or piling it up in the vicinity of the Humboldt Coastal Nature Center in Manila, CA. Several times a year, these piles were burned. Friends of the Dunes desired to have a use for all of the waste beachgrass.

Friends of the Dunes would like to formulate a product from the piles of removed beachgrass accumulating in the dune areas.

Working with the client, Carol Vander Meer, team FWBTD developed the following criteria by which to judge the viability of the possible solutions to the problem.

The final solution to the problem of excess beachgrass is the Class 3 BGB (Beachgrass Baler). This is a manually-powered machine which converts loose beachgrass into compressed rectangular bales. The baler is based on existing designs for a hand-powered baler. The baler is made of wood, and is roughly four feet by two feet without the lever-arm. Once in location, beachgrass can be loaded into the opening in the top of the box, and then the plunger (attached to the lever arm) can be lowered onto the beachgrass. By pressing up on the lever arm, the beachgrass is compressed, at which point it can be tied off with a biodegradable twine and taken out of the door in the box. 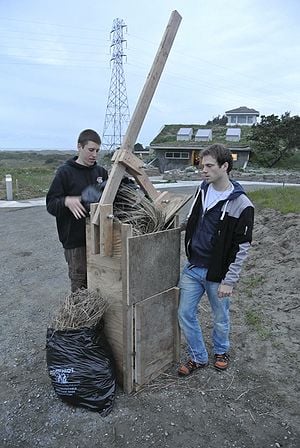 The device consists of a box formed from 4 sheets of 4.5' X 1.5' X 1" plywood, and a 1.5' X 1.5' X 1" plywood bottom. The box is framed along the exterior with 2" x 2" pieces of wood. At the bottom of one side, the plywood is cut horizontally 3' up from the bottom. This bottom sheet is attached with two hinges spaced 8" from the center of the sheet to the left wall, forming a door. Through the door a 4" by 1" section is cut out to facilitate tying of the straw-bale. Attached to the left and right exterior walls of the box from the door are four L-shaped 2" x 2" pieces with a 10" long arm and 4" section forming the L. These four-inch sections are pointed upwards and will overhang the door by 2". The pieces will be attached to the left and right walls at the same level as the hinges, spaced 8 inches apart from the center of the door. The exterior framing is cut to accommodate the L shaped pieces. The plunger and lever arm are attached to the left exterior wall adjacent the door. On the center of the wall opposite where the lever arm attaches, there is a 2' by 3" groove cut down from the top to accommodate the range of motion of the lever arm. The lever arm unit consists of two 2" X 4" X 1' pieces of wood mounted 2.5" apart. There is a hole through each piece centerline, 3" down from the top. There is a metal axle running through this piece and through the main arm, a 2" X 4" X 6' piece of wood forming a swiveling arm. Attached 1.5' from the swivel point are two 2" X 4" X 8" pieces of wood with two holes drilled through each piece centerline, 2" from each end. These are attached via metal axles in the same way as the swivel point. These pieces attach to a 2" X 4" X 3.5' section of wood attached via the same swiveling axel set-up described before to two 2" X 4" X 5" pieces attached to a 1.25' X 1.25' X 1" section of plywood. The string clips are formed by two metal strips 1/16" thick, 1/4" wide and 2.5" long. They are fed through a 1/2" radius holes drilled through the sides of the box. (For hole placement refer to diagram.) The clips have enough resistance to keep a string in place, but the string or twine can be easily pulled through the clips, when removing the straw-bale from the apparatus. The clips are attached to the exterior via four screws, two for each piece of the two metal strips making up a clip. The clips are bent such that the form a v-shape with a flange allowing a string to be easily fed through it. The clips extend 1/2" into the box. The box of the apparatus is mounted to a 3' X 3' piece of 1" thick plywood with four 2" X 2" X 3' pieces of wood around the base forming a stable platform. 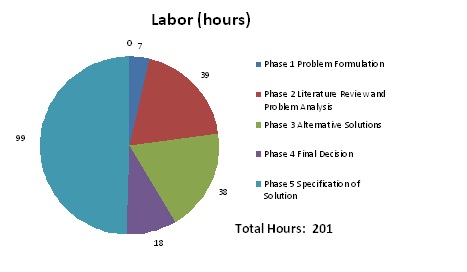 The baler will be stored on-site at the Humboldt Coastal Nature Center, and its mobility makes it useable wherever beachgrass piles are located. Once moved into position, only two volunteers will be necessary to bale the beachgrass. One or both can put the grass into the top of the device, either by hand or time-saving tool. After the box is filled, one of the volunteers can press up on the lever bar, compressing the grass. If the bar hits the edge of the plunger tips, more beachgrass can be added. While one volunteer is compressing the grass, the other can tie off the bale with the cord through the conveniently placed eyelets.

The baler should have a reapplication of waterproof stain every two years. Aside from this the only continual maintenance cost is 40 dollars every 3-4 years for baling twine.

Bennitt, Gretchen "Why Do We Have No Burn Days?" NORTHERN SIERRA AIR QUALITY MANAGEMENT DISTRICT <[15]>

After asking several employees about the Beach Grass Baler they regretted to report that they had not seen such tool at Friends of the Dunes.