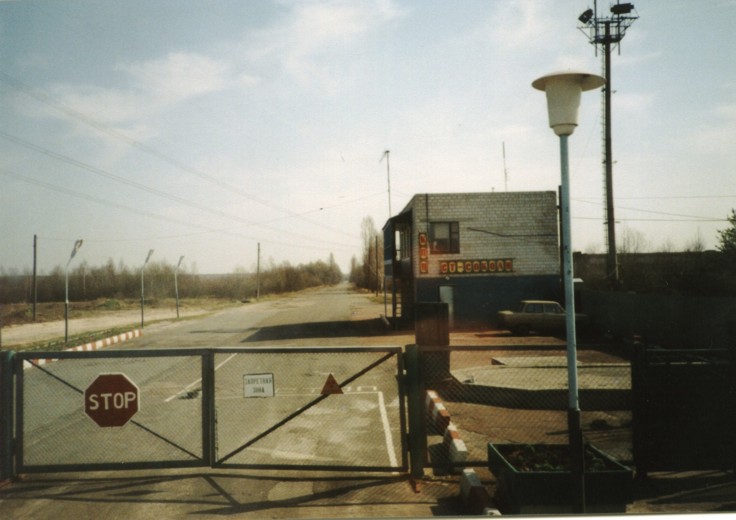 Entrance to the Chernobyl Exclusion Zone

The Exclusion Zone, "Zone of Alienation," or "Radiological preserve," is an area surrounding the ruined Chernobyl nuclear power plant, site of the world's worst nuclear disaster. Since the accident in 1986, the area around the reactor has been contaminated with Strontium-90 and Cesium-137.[1]

Approximately 30 kilometers around the Chernobyl plant is the designated Exclusion Zone, where the majority of radioactive materials and equipment used in the containment of the disaster was abandoned. The Ukrainian Ministry of Emergencies governs the zone - however, the zone crosses Ukraine's border with Belarus, and a similar Belarusian agency governs the zone on its own soil.[2] According to the International Atomic Energy Agency, 187 former settlements exist within the zone, ranging in size from villages to the city of Pripyat, where most plant workers called home.[3] While nobody aside from those responsible for maintaining the zone and the decommissioned Chernobyl plant are allowed to enter the exclusion zone, many former residents have moved back into the area to be close to their ancestral homes, family cemeteries, or simply because they don't want to give up their homes. The government has begrudgingly allowed former residents to move back, and they live mostly un-harassed. Some radiologists also reside within the zone, studying the long-term effects of radiation on the local flora and fauna.

Plants and wildlife within the zone seem to be flourishing, but not without difficulty.[4] The reduced human impact on the zone has allowed the dense local forest to encroach into the villages and towns, and animals now roam close to former human settlements. However, a 2007 study conducted by Anders Moller and Tim Mousseau suggests that while life is returning to the exclusion zone, it's not unharmed by the lasting effects of radiation on the area. Anders' and Moller's findings indicate that the closer one gets to Chernobyl, both the number of species and the population density of those species found decline by nearly 66%. They also found that some species in the zone have a higher rate of genetic abnormalities in areas with normal background radiation.[5] James Morris, a biologist at USC, observed that some trees are also suffering from abnormalities - he said in an interview with National Geographic Magazine that the radiation has affected the ability of some trees to know which way to grow. "One of the great ironies of this particular tragedy is that many animals are doing considerably better than when humans were there," Mousseau said.