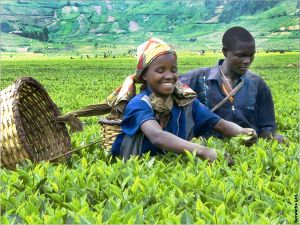 The Ethical Tea Partnership (ETP) is a UK-based nonprofit organization that works with both tea companies and tea producers across the world to create a “thriving tea industry that is socially just and environmentally sustainable” [1]. Initially formed in 1997 under the name of the Tea Sourcing Partnership (prior to a 2004 change of title), ETP was founded by a number of local tea-packing companies choosing to work en masse to monitor and assess their respective supply chains[2]. A list of these original tea-packing companies can be seen in the founding members section. This noted, ETP has evolved drastically since its 1997 origins with both an expanded range of initiatives and an increased international scope[3]. Along the lines of these prongs of progression, ETP is now an industry-wide international entity with operations as a tea supply chain-monitoring/certification mechanism with 29 members in various countries spanning most all of the world's major tea producing regions[2].

Geared towards improving the social/environmental conditions of the world's "tea estates, factories, and gardens", the work of ETP is divided into the following three areas: monitoring and certification, producer support, and strategic sustainability[4].

The monitoring and certification component of ETP's work has been in effect since 1997 and is completely free-of-charge to any and all tea producers [4]. This program is focused on obtaining "continuous improvement" and maintains a range of environmental and social provisions that are outlined in the ETP Global Standard [4]. Available for download from the ETP official website, the ETP Global standard is a publication that covers and conveys all of the central social/environmental issues associated with tea to help producers meet ETP's international standards [5]. The provisions required to be met by ETP members are illustrated in the table below:

As two of the three main sustainability programs of ETP (alongside monitoring & certification), Producer Support (2006) and Strategic Sustainability (2010) have both proven to be particularly effective for ETP in its attempted improvement of tea workers’ lives at a global scale [4].

In accordance with its central aims of improving the tea industry's overall sustainability, ETP has provided training via its "producer support" program in 5 areas that are often laced with difficulty for tea producers since 2006[4]. These areas are listed below: 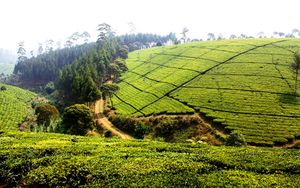 A tea plantation in Indonesia

In whole, the training and support given to producers through this initiative works to help management of tea companies to "understand their responsibilities to workers and the environment"[4].

In its approach to matters like climate change and/or rapid social development that could potentially threaten the longterm future sustainability of tea, ETP established a "strategic sustainability" initiative in 2010. Most often culminating in the provision of toolkits to rural farming communities, work programs included under the banner of this initiative range from a project pointed towards helping upwards of 10,000 smallholder farms adapt to the adverse effects of climate change in Kenya, to similar enterprises aimed at improving "smallholder farmers’ livelihoods" in Indonesia[4].

Any company that is involved with sourcing/trading/packing of tea is free to gain membership with the ETP organization [6]. As such, member companies of ETP vary from "large multinational organisations with well-known brands to smaller, privately-owned specialists producing ’boutique’ blends"[6].

The 11 original tea-packing companies that started ETP are listed below: 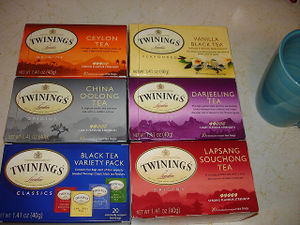 Twinings, one of the founding members of ETP

Now numbered at 29, an updated list of ETP's current member companies can be found in the members section on the organization's official website[6].

Somewhat akin to the existent naysaying of Fair Trade, there has been criticism of ETP on a number of issues related to ethics and efficiency [7]. This backlash vis-a-vis ETP is represented well in the forthcoming excerpt from a review of a 2006 report titled Sustainabilitea: The Dutch Tea Market and Corporate Social Responsibility [7]:

“ETP auditor visits are planned and announced, allowing tea plantation owners to hide or temporarily remove or change anything that would negatively impact their audit. Although the ETP does undertake efforts to help their auditors relate to tea workers...it is possible that workers will identify or associate them with management, and not trust them with any information that could potentially reflect poorly on management.”