There are a number of different methods that have been used to inject diesel fuel into the cylinder or combustion chamber of diesel engines. 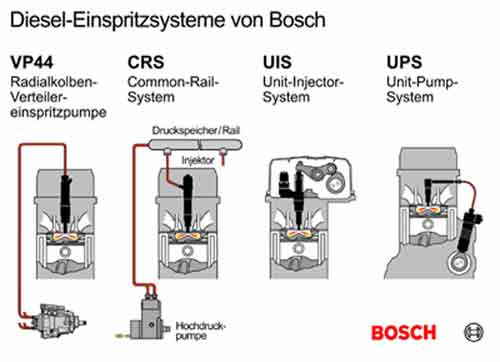 An in-line injection pump is basically a number of jerk pumps combined into one unit.

Rotary injection pumps have a rotor that distributes the fuel to each cylinder in turn. There are two basic designs one in which the rotor also reciprocates to pump the fuel, the other, radial piston type, uses plungers pushed in towards the center of the rotor by an internally lobed cam ring.

The injection pump and injector are one unit

A number of different methods are used to improve combustion at cold starting and running and low load operation.

A number of different methods have been used to heat the inlet air to increase cylinder temperatures and provide improved combustion.

Installed in the inlet tract these electrical matrix heaters raise the temperature of air being drawn into the engine.

The ECU takes signals from a number of sensors fitted to the engine and uses the information obtained to control parameters such as timing and fuelling.

Engine parameters, such as fuel quantity and timing, can be modified to better suit the combustion characteristics of a given fuel. A number of options are available:

In order to optimise combustion a number of companies are beginning to offer engines with combustion sensors fitted.

Audi to launch the cleanest diesel in the world

Thesis-Beginnings for cylinder pressure based control, by Raymond Cremers

Page data
Retrieved from "https://www.appropedia.org/w/index.php?title=Engine_components&oldid=599636"
Cookies help us deliver our services. By using our services, you agree to our use of cookies.
Categories:
Maintenance categories:
About Appropedia · Policies · Contact · Content is available under CC-BY-SA-4.0 unless otherwise noted.