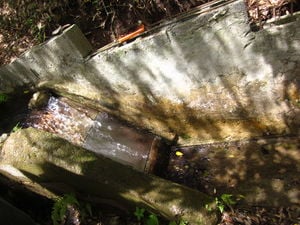 The hydropower system in El Limon, Dominican Republic, is a microhydro system capable of producing 18 kW. It was designed by resident Jon Katz, funded by mostly UN grants, and built by community members. It is the first community-based microhydro project to be built in the Dominican Republic and supplies the town with all of its power. This article will briefly describe the town, the system, and the fundraising and building process.

El Limon is a small village in an arid, mountainous region of the Dominican Republic. It is located about 9.5 km from the city of Ocoa, which is 106 km from the capital city of Santo Domingo. El Limon has about 300 citizens, making up around 70 households. The town has packed dirt roads and is near the top of a mountain and is not connected to the national power grid. Its main source of employment for residents is farming, especially tomatoes, eggplants, and onions. Because there is no local river, irrigation water must be piped in from a nearby river on a different slope of the mountain. This water has been used to power the town's two microhydro generators, the first in 1998 and the second in 2012.

The town's first system was designed in 1996 and completed in 1998. The cost of materials was paid for by funding from Rotary, Adesjo, and the UN's Global Environmental Facility's Small Grants Program. The system's turbine was designed and built in Cornell University's machine lab in the United States and shipped to the Dominican Republic. The community paid for half of the construction costs with volunteer labor. Each household donated one full day of work per week every week so teams were able to work year round.

The system used water piped in for irrigation. At the top of the mountain, it is run through a sand filtration system to remove any large particles that might damage the turbine. The water then runs downhill for about 1 km in 8 in PVC pipe to build pressure. At the powerhouse, the water turns a Pendleton (this might actually be a Pelton) [verification needed]turbine, which then powers a generator. The power is then converted to usable wattage and distributed to households using traditional power lines. When the project was finished, the system successfully generated about 30 watts of power for each household—enough to power a few lights and a small TV set. 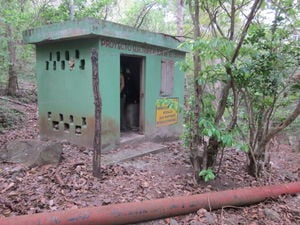 The original powerhouse in El Limon.

The community were so pleased with the results of their first system, they decided they wanted to pursue a second, larger system. The call for more power was led mainly by the women in the community, who were pushing for electricity of larger appliances like washing machines and refrigerators, as well as community members who wanted larger televisions.

The design for the second system was completed in 2008 and the community applied for a grant from the Global Environmental Facility's Small Grants Program to pay for their new, larger turbine. After they were approved for the grant and purchased the turbine, it took another three years to raise the funds within the local municipality to pay for the construction of the new powerhouse where the turbine and generator would be installed. Because the second powerhouse was farther down the hill than the original one, the community needed to add more 8 inch PVC pipe to the system, as well as about 61 meters of steel pipe of the same size attached to the powerhouse because of increased pressure. Most of the money to pay for the extra pipe, as well as any repairs to the old system, came from development grants from the Finnish and Austrian embassies in Santo Domingo. The Dominican government paid for and helped to install the power lines, poles, and transformers that connected the community's houses to the powerhouse. The system was finished in 2012 and, though it is capable of producing 18 kW, it currently produces only 6 kW, due to a severe drought. Despite the drought, each household still receives an average power of around 80 watts. The community is responsible for upkeep of the system. Each household pays 150 Dominican pesos a month to pay the system operator and to buy repair pieces like glue, pipe, and smaller pieces of machinery. 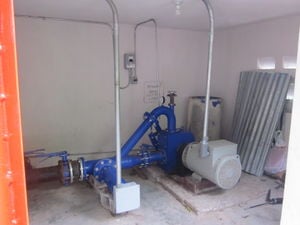 The turbine and generator for the second system in El Limon's new powerhouse.
Page data
Retrieved from "https://www.appropedia.org/w/index.php?title=El_Limon_Microhydro&oldid=646462"
Cookies help us deliver our services. By using our services, you agree to our use of cookies.
Categories:
Maintenance categories:
Comments
Privacy policy · About Appropedia · Disclaimers · Mobile view · Content is available under CC-BY-SA-4.0 unless otherwise noted.