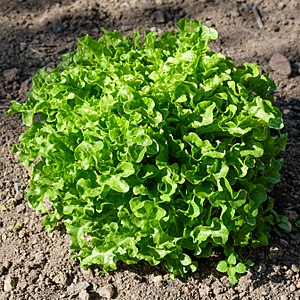 Many plant leaves are edible, from lettuces in salads to the leaves of many herbs. However, many leaves are not edible due to toxins present in them that affect human beings. Some leaves can be eaten by some species but not by others, due to the development of specialized digestive processes in some animals.

The number of edible leaves is extensive. Martin and Ruberte (1975) list about 1500 species. Many of these are common plants grown for other uses, and thus the leaves constitute little known by-products. Common weeds are frequently edible. But the rule with leaves is to know the species before eating and to eat leaves in only moderate quantities. In addition to protein, leaves contain good quantities of vitamins and minerals. They also contain undesirable substances, and some are highly toxic to the human being.

This article details the uses of edible leaves in the human diet.

Common food crops, the leaves of which are edible include: Peppers, all kinds of squashes and melons, a1l classes of beans, okra and Roselle, all cole crops, the aroids (taros, dasheens), sweet potatoes, and cassava. Edible ornamental leaves include Hibiscus and Celosia, In addition, a few tropical crops are grown especially for their 1eaves.

The tops of the common potato are not safe to eat, due to their content of solanine.

The fiber content of leaves is high. Thus, the most tender leaves of any plant are generally those selected as food. Fiber is not harmful if taken in reasonable amounts. In fact, there is some evidence that diets in the United States do not contain sufficient fiber. But excessive quantities only add bulk to the digestive tract.

Probably no other class of food stuffs receives so little attention when compared to its potential for providing protein as the edible leaves. Found almost everywhere in the tropics, the leaves constitute excellent sources of protein that can often be utilized to balance diets that depend heavily on starches or on a single, unbalanced plant source of protein. The amount of protein per calorie is higher in the case of select species than that of any other plant foods, including soybeans.[verification needed] Under conditions of survival, leaves may be the easiest foods to obtain, and their inclusion in the diet can be a valuable aid to good nutrition.

From a nutritional standpoint, leaves vary widely. The leaves of legumes and of euphorbiaceous plants are among the richest in protein. Dark green leaves tend to be rich in vitamin A as well as protein. Protein concentration often appears 1ow when figures are quoted on a wet weight basis. Leaves contain large quantities of water that may lead to erroneous conclusions when leaves are compared to seeds. On a dry weight basis, protein contents are some times extraordinary. A few species with especially high protein content are given in Table A below.

A few especially good sources of leaves merit mention here. Cassava, normally grown for its starchy tuber, produces an immense quantity of protein in its leaves. Crude protein of the leaves on a dry weight basis varies from 20 to 30 percent. Protein content is highest in young leaves. Methionine is the limiting amino acid. In most parts of the tropics cassava is widespread but the leaves are not used. Occasional harvest of the younger leaves has little or no influence on the tuber yield. Cassava leaves should always be cooked before they are eaten.

Chaya, Cnidoscolus chayamansa, is an extremely vigorous plant from Mexico. Propagated from cuttings, a few plants of this species are sufficient to furnish a twice-a-week green spinach dish for a family. As in the case of cassava, the leaves must be boiled to eliminate hydrocyanic acid. Another excellent leaf is that of Sauropus and rogynus, an Indonesian plant. The young shoots are eaten raw and are extremely rich in protein. The p1ant, established as a hedge, is easy to maintain. Per acre yields of this plant has surpassed all other tropical greens in Sarawak. The common spinaches of the tropics vary greatly in their nutrition content. One of the best of these is sometimes called Chinese spinach, the edible amaranth. As a plant that grows very rapidly from seed, it is one of the easiest greens to produce at the household level. The protein content has been reported to be as high as 58 percent with a chemical score of 82. Leaves are prepared in many ways but the easiest, and perhaps most satisfactory technique is by steaming them. They also can be added to soups and stews l0 minutes before cooking is terminated.

Unfortunately, leaves often contain toxic substances. The chief toxins are hydrocyanic glycosides, oxalic acid and alkaloids. The toxic as well as the edible properties of leaves are already fairly well known, and no harm should result if the species is known and leaves are eaten in moderate quantities. In some cases, indigenous knowledge on appropriate preparation of certain leaves renders them safe to consume but this knowledge needs to be learned before assuming certain leaves are safe to eat.

The oxalic acid content of spinach makes it one of the least desirable of the edible leaves and super tasters may find it harder to enjoy. The level of oxalic acid in rhubarb leaves is too high for it to be safe and such leaves should never be consumed, or poisoning will result, with possible kidney failure.[1]

Page data
Retrieved from "https://www.appropedia.org/w/index.php?title=Edible_leaves&oldid=633383"
Cookies help us deliver our services. By using our services, you agree to our use of cookies.
Categories:
Maintenance categories:
About Appropedia · Policies · Contact · Content is available under CC-BY-SA-4.0 unless otherwise noted.