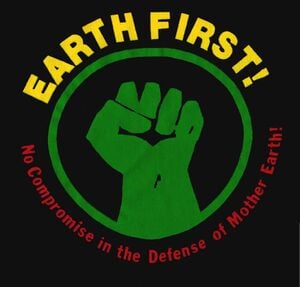 If you answered yes to any of these questions, then Earth First! is for you. Earth First! is effective. Our front-line, direct action approach to protecting wilderness gets results. We have succeeded in cases where other environmental groups had given up, and have drawn public attention to the crises facing the natural world.

Earth First! was named in 1979 in response to a lethargic, compromising, and increasingly corporate environmental community. Earth First! takes a decidedly different tack towards environmental issues. We believe in using all the tools in the tool box, ranging from grassroots organizing and involvement in the legal process to civil disobedience.

Earth First! is different from other environmental groups. Here are some things to keep in mind about Earth First! and some suggestions for being an active and effective Earth First!er: First of all, Earth First! is not an organization, but a movement. There are no "members" of Earth First!, only Earth First!ers. It is a belief in biocentrism, that life of the Earth comes first, and a practice of putting our beliefs into action.

While there is broad diversity within Earth First! from animal rights vegans to wilderness hunting guides, from shrill voices to careful followers of Gandhi, from whiskey-drinking backwoods riffraff to thoughtful philosophers, from misanthropes to humanists there is agreement on one thing, the need for action!