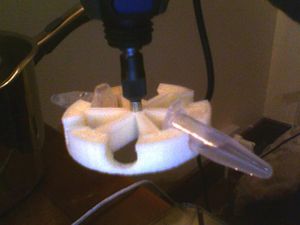 Dremelfuge To see some picures of Dremelfuge used to spin down cells, see [1]

DremelFuge is a printable rotor for centrifuging standard microcentrifuge tubes and miniprep columns. Full details at Thingiverse available here. The Dremelfuge is an example of open source rapid prototyping of OSAT project developed by Cathal Garvey in Ireland.

The DremelFuge can be used in the field as an extremely inexpensive centrifuge (costing about $50 - primarily the cost of the drill - compared to commercial systems starting over $500). It can be used for any application in development needing a microcentrifuge including medical, biochemistry or education in the sciences. It was originally developed for DIYbio. It requires industry standard 1.5ml/2ml Eppendorf/Microcentrifuge tubes.

DremelFuge makes use of the Shapes.scad script kindly released by Catarina Mota, which is released under the terms of the GNU General Public License as published by the Free Software Foundation.

DremelFuge itself is released under an Attribution, Sharealike License. It's already available on Shapeways, and you're entitled to print it for yourself or someone else for free if you have a printer handy. As a personal favor to the creator, don't undercut the original author on Shapeways please, unless you have a significantly better version and thus do not call it "Dremelfuge" if you do.

Dremelfuge is a home-made Centrifuge, a potentially hazardous tool. Use your own common sense. Centrifuges require some care in order to be used safely, and a home-made centrifuge in particular will have hazards that you should be ready for if you try to use it.

If you want to use Dremelfuge, use your head and take safety precautions:

Here are some RCF values (g-forces) to expect when it is used with a standard 1.5ml microcentrifuge tube: