The damp, rich aroma of the earth rises from our fingers as we knead the soil with our hands, piling it up into soft, rounded mounds. My two sons, who are eight and five years old, wrestle and play as they dig, getting almost as much dirt onto each other as they have in their own garden plots. This year my wife and I have given each boy his own 5- by 5-foot garden plot to plant whatever he wants.

“We can plant Jack-O-Lantern pumpkins, and corn on the cob!” Hunter exclaims. One of his favorite autumn activities is getting lost in the corn maze and picking out giant, too-big-to-carry pumpkins from our local farms along the Mad River and out at Blue Lake.

So, on this cloudy spring day we are mounding up soil with our hands, pushing small seeds into the earth and looking with hope to the future. Although our family is by no means self-sufficient, we have been growing more of our own food each year, our garden growing in size, our harvests growing in number, and our meals growing in taste and nutrition.

We are beginning the important process of digging in, of putting roots down in a place, and learning how to belong here. Northern California poet and environmental philosopher Gary Snyder, who makes his home not far from here on the San Juan Ridge, calls this process “re-inhabitation,” and believes it is our most urgent purpose for the 21st century. In essence, re-inhabitation is a reversal of much that industrialization and globalization have wrought in the last century, a return to more regionally based economies, more locally controlled politics, and less energy and resource-intensive ways of living. In one sense, “digging in” means re-weaving the threads of our environmental and social communities that have become so frighteningly unraveled, especially those making up the food-web that supports and sustains us.

I grew up on a small family farm in the Midwest and witnessed much of this unraveling firsthand. During the farm crisis of the 1980s especially, we watched as family after family left their farms, businesses closed, and what used to be thriving rural communities became ghost towns full of vacant store fronts and broken windows. At the start of the 20th century, more than 30 percent of Americans were farmers and most of our food was grown within a few hundred miles of our own homes. Now, 100 years later, less than 1.8 percent of our population farms, and the average piece of food travels 1,500 miles from farm to fork. This was the American heartland I grew up in, where wheat for the entire world was grown, and where you couldn’t even find local lettuce or a tomato grown within the state. In fact, Wavoka, the great spiritual leader of many Native American Nations, started the Ghost Dance, and spoke his haunting prophecy in the Midwest, the heart of our agricultural land, saying: “I have seen their future brothers. They shall sit beside their square houses and starve.” Now, a century later, agricultural experts and historians are beginning to see this same specter of food insecurity and starvation looming on the horizon.

Industrial agriculture, as we are finally beginning to admit, is amazingly fragile and not sustainable over the long term, especially because it is dependant on cheap and abundant supplies of fossil fuels that are rapidly running out. Because industrial agriculture relies on massive amounts of fossil fuel at every stage of the process—from planting and spraying crops, to harvesting, processing, transporting, and storing them—it makes up almost 20 percent of our total fossil fuel use as a nation. Shifting to local and organic agriculture is one of the most effective means we have not only for creating a sustainable food system capable of feeding us in the future, but also for reducing our dependence on foreign oil and combating climate change.

With wide-brimmed hats for protection against the sun, my wife and I are planting potatoes and peas, garlic and onions, lettuce and tomatoes and many other things the boys won’t put in their garden plots, but may still eat off their plates. Like many others here, we also attend the farmers’ market religiously, where the boys play with friends on their favorite climbing tree, and we hula-hoop, talk with our own friends, or dance to local music. And, as a part of our process of “digging in,” we recently joined a local Community Supported Agriculture Farm (the Arcata Educational Farm), where student farmers provide free gardening and cooking advice along with the weekly baskets of food. These are special events for us, enjoyable weekend routines that pull us through the hectic work week; attending them doesn’t feel like my other “activist work” or “community service.” Eating locally is not a sacrifice.

Eating locally is not just about supporting local farmers and food producers to ensure that we, and our children, can avoid starvation, but that kind of food security is important. Eating locally is also about eating better, tastier and healthier food, protecting both our biospheres and our bodies. We lost my bother, Bart, to cancer last year; his was caused in part by living in the Midwest and being exposed to several of the 66 known carcinogens routinely used as pesticides and herbicides. Toxicologists now estimate that over 90 percent of the 1,570,000 new cases of cancer each year are caused by the chemicals we are putting into our environment, and recognize farming as one of the nation’s top 25 “cancer industries.” Since the average middle-aged American has over 177 different organochlorides in his or her body, it is no stretch to say that industrial agriculture is currently poisoning those it professes to feed.

“You can either pay now, or pay later,” my wife is fond of saying, and we have decided to pay now. Instead of paying with costly medical care, prolonged chemo treatments, futile surgeries, and untimely funerals, we are paying with dirty fingers, hours of planting and pulling, and time spent in the kitchen cooking together. These are costs we can accept; in fact, they are their own reward. And, yes, sometimes we do pay a little more at the store for organic and local varieties of meat, milk, cheese, bread and produce, but that little extra goes to people we know, stays here in our community, and comes back to us in many ways. For most food purchased in the U.S. (that is non-local food), 80 percent of the purchase price goes to advertising, packaging and shipping, while only 20 percent goes to the farmer. Locally produced food, however, significantly changes these figures. Each farmer gets more of our food dollar when we buy locally, not only making local farmers able to compete in the marketplace and stay in business, but also able to further support our local communities through local taxes and spending. Without committed local support, rural counties like Humboldt soon become colonies, places from which natural and human resources are continually extracted and funneled off.

For those of us who live here, and especially for those of us with children who we hope will be able to make a living here, we must also eat here. Right now, American agriculture is undergoing a renaissance of re-localization and de-industrialization, as more and more Americans realize the benefits of moving away from corporate agri-business and global markets toward supporting local, organic farmers and farmers’ markets. While it is common wisdom to recognize that “You are what you eat,” we are also beginning to realize that “You are where you eat.” 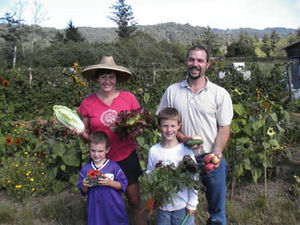 The boys are harvesting strawberries at an approximate rate of “one for the bucket, and one for the mouth,” while I braid some more garlic for drying. We will add these strawberries to some early-season blackberries and a little wood sorrel, or “sour flowers” as the boys like to call it, for dessert. The dried garlic will be used along with stored potatoes from last year, and new carrots and onions from this year, and finished off with local whole milk and Humboldt cheese, for my favorite Potatoes au Gratin. Others are bringing the Humboldt grass-fed beef, the locally caught and smoked salmon, the tossed salads, locally made wines and homemade beers.

This local potluck, shared with close friends and neighbors, won’t pay profits into any corporate stocks, nor will it add massive amounts of carbon and toxins into the environment. It is a true “added value investment,” in both the present and the future, one that will continue to pay back in dividends of well-formed friendships and cohesive communities.

The kids are coming in, running around and circling tables like moths, looking for parents and friends to sit with. We circle up in one large group, young and old, and stand together hand in hand: some hands are slender and soft, others weathered, cracked and calloused; some belong to farmers and cooks, others to teachers, bank tellers, and mechanics, to husbands, wives, and children. We take a moment to look around the circle, our eyes moving from one beaming smile to another, as we learn the faces of our place in the world, and get to know the people with whom we live.

I whisper a quick prayer for us,

“Together let us eat, and our children grow.

Together let us reap, just what we sow.”

Page data
Retrieved from "https://www.appropedia.org/w/index.php?title=Digging_In,_Northern_California&oldid=600868"
Cookies help us deliver our services. By using our services, you agree to our use of cookies.
Categories:
About Appropedia · Policies · Contact · Content is available under CC-BY-SA-4.0 unless otherwise noted.