The semi-arid regions experience long dry spells and erratic rainfall less than 500mm per annum. This is often poorly distributed over three months. In addition the areas experience high temperatures of about 38º Celsius resulting in high evaporation rates. Where soils are poor there is also deep percolation. Water received therefore quickly disappears within a few hours of a rainstorm. Farmers in Manama Communal Area in Gwanda district of Zimbabwe have modified the standard contour ridges and the infiltration pits to suit these conditions and named the technique - Manama Infield Rainwater Harvesting Storage Facility. This was after the realisation that farmers were losing water after harvesting it, resulting in total crop failures especially during the dry spells.

This consists of a dead level contour with storage underground tanks made from local materials. The capacity range from 5m3 to 20m3 depending on farmer preference. A dead level contour is a channel dug in the field with a zero gradient or slopes, so that water does not flow but is harnessed and stored in the channel. The underground storage tanks are constructed in such a way that they are covered to reduce evaporation and rammed to reduce deep percolation. 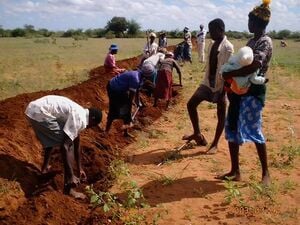 Farmers have observed that dead level contours harness rainwater but quickly lose that water due to evaporation and deep percolation. This brought the innovation of constructing the underground tanks described below. See picture below (Figure 2) of completed dead level contour. The minimum depth and width should be 30cm and 1500cm respectively. The length should be from end to end of the field. 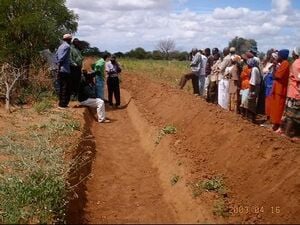 All the tanks in the last dead level contour may need a non-permeable layer therefore a thicker layer may be required. However all other tanks must be semi-permeable. Mix termitaria with water to make mortar and plaster up to the marked root zone level of your deep-rooted crops.

Covering the top of the underground tank[edit | edit source] 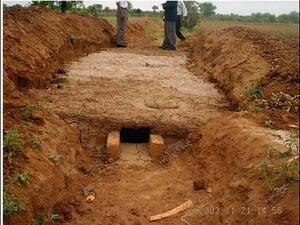 Advantages of this technique[edit | edit source]

Disadvantages of this technique[edit | edit source]

Maintenance of the facility[edit | edit source]

To achieve maximum benefits from the facility, maintenance should be given utmost priority. During the dry season (usually soon after harvesting) when all water has been used from the tank remove the temporary top plaster.

The Manama In-field Rainwater Harvesting Storage Facility has enabled farmers in semi-arid areas to plan for and cope with disasters such as drought and diversify strategies for sustainable livelihoods. Formerly 'waste lands' have become productive fields giving farmers a worthwhile investment of their time in dryland farming.

Page data
Retrieved from "https://www.appropedia.org/w/index.php?title=Dead_level_contours&oldid=600459"
Cookies help us deliver our services. By using our services, you agree to our use of cookies.
Categories:
Maintenance categories:
About Appropedia · Policies · Contact · Content is available under CC-BY-SA-4.0 unless otherwise noted.