This technical brief describes some of the experiences in animal health care delivery in Eastern Africa by Practical Action East Africa (formally Practical Action EA) and its partners as part of a food security and drought mitigation strategy among the pastoralists living in the arid and semi arid lands of East Africa. The pastoralists mainly keep cattle, camels, sheep, goats and donkeys and animal health care is a key factor affecting livestock production.

Community-based Animal Health Care (CBHC) is an approach aimed at delivering services that are controlled by the community as opposed to the conventional government controlled or centralised service delivery approach. It is the delivery of animal health services by selected members of the community who are trained to handle basic animal health care issues at village level. These trainees are called community based animal health workers (CAHWs). For sustainability they are linked to a drug supply system as well as a referral system with veterinary professionals. This approach has also been used in the provision of animal health services in Nepal and India.

The veterinary department was established in Kenya in 1903 by the British government, which was more concerned with disease control and research, while European farmers in collaboration with private practitioners, took care of clinical services and breeding programs. This was the norm in the high potential areas where European farmers were located. The indigenous farmers were offered free disease control by the government so that their animals would remain free of disease to reduce the risk of infection to the European highgrade cattle.

Just before independence, the African farmers were allowed to keep grade cattle. Soon after independence in 1963, the European farms were sub divided into smaller units for allocation to small-scale African farmers along with the high-grade cattle in those farms. The small-scale farmers had no experience in managing high-grade cattle that were less resistant to diseases, particularly tick borne diseases. The animals thus started dying in large numbers. The African farmers were also poor, with limited resources to invest in highgrade cattle. They therefore could not afford fees charged by the private veterinary practitioners. Consequently, the practitioners could not make a living and thus left the country. A vacuum in the provision of services was created and the government had to intervene to protect the high-grade national herd from risks of diseases. Clinical centres were built, artificial insemination services and bull schemes were opened, dipping programmes organized and where veterinary staff was inadequate expatriates were hired, and while manpower training was increased.

These types of services that were subsidized became a heavy budgetary burden and could not be sustained for long.

Over the years, the allocation for non-recurrent salary budgets has stated declining, resulting in inefficient delivery of services. It was also realized that the remote areas of Kenya were not being adequately served by the central government veterinary services for reasons, which included:

The absence of veterinary services led to the development of community-based animal health care.

Community-based animal health care (CAHC) was introduced in Kenya in 1986. This was adopted from experiences in both Nepal and India.

1999 IFSP-E funded by GAA Makueni district Kenya Source: Community-Based Animal Health Care in East Africa Setting up a community based animal health care system The main approach and procedure involved in setting up a CBHC System involved a process, which included the following;

Conduct refresher courses at regular intervals based on the CBAHWs performance assessed during the monitoring. Retraining is devised based on the findings. 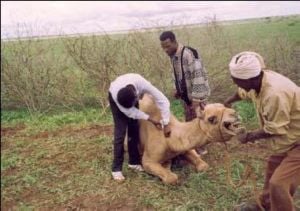 Photo of CBAHWs at work treating an animal in Marsabit. (copyleft Practical Action)

The veterinary legislation in relation to CBHC system[edit | edit source]

The CBAHC provided an alternative animal health service in areas where no government veterinary services are available. It involves semi-trained personnel who are not eligible for licensing by the national veterinary boards in some countries. In addition, the Veterinary Surgeons Act in Kenya regulates several aspects of the veterinary profession, including who should practice and the code of ethics. The acts specify the minimum qualifications required for registration by the boards. As it stands today, Diploma and Certificate holders in animal health do not qualify for registration or licensing and can only practice under the supervision of registered/licensed veterinary surgeons.

Another act that affects the operations of veterinarians is the Pharmacy and Poisons Act. This act prohibits all veterinary surgeons from stocking large quantities of Part one poison (drugs) unless a registered pharmacist is in direct control of the premises where the drugs are stocked or sold. The requirement seriously curtails the profitability any veterinary practice in the area. The overall effect of both acts on paraprofessionals and auxiliaries is that they are not recognized by the regulatory bodies, and that they may not stock and sell the drugs, despite these being the only persons available in ASALs. Consequently CBAHWs are providing the services illegally. It has been recommended in some countries such as Kenya that the Veterinary Surgeons Act be reviewed to accommodate semi professionals and other cadres of veterinary Practitioners (Hubl et al., 1998). This move would lead to the improvement of the delivery of animal health services especially in ASAL.

Policy advocacy was necessary considering the serious need for vet services in the ASAL areas against the current veterinary legislation. The points to be considered were;

At an animal Heath stakeholders meeting held in Meru (Kenya) May 1999, It was reported that Community-based Animal Health workers (CBAHWs) training manuals although existing have the following shortcomings;

A recommendation was made that all stakeholders who have an interest in sustainable delivery of community-based animal health services should form a committee to review these issues and make appropriate recommendations. At the same time a desire was expressed that Kenya Veterinary Board (KVB) and Department of Veterinary Services should officially recognize the other cadre involved in the delivery of animal health services which include CBAHWs, KVB to over see the training of the training of CBAHWs and the process of training CBAHWs be harmonized by formulating a common manual under the auspices of well trained professional educators. This would be followed by training a cadre of professionals, who in turn would train in different locations, using a common minimum curriculum and a varied component, which would emphasize the local breeds. It is only then that the Kenya Veterinary Board (KVB) will recognize those who pass. d) Other challenges affecting the CAHC Systems were:

Page data
Retrieved from "https://www.appropedia.org/w/index.php?title=Community-based_animal_health_care&oldid=633412"
Cookies help us deliver our services. By using our services, you agree to our use of cookies.
Categories:
Maintenance categories:
Comments
Privacy policy · About Appropedia · Disclaimers · Mobile view · Content is available under CC-BY-SA-4.0 unless otherwise noted.
</html