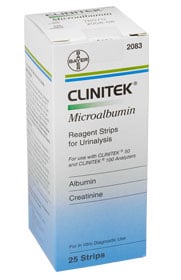 People with diabetes, including gestational diabetes and hypertension, are at risk for developing kidney disease which could lead to eventual kidney failure and death. This is hard to predict in patients who do not regularly check the status of their kidney function. Therefore, some may undergo serious kidney damage without knowledge or diagnosis.

The CLINITEK microalbumin strip tests give an accurate reading of the albumin and creatine ratios in one minute. This device makes it possible to test for early kidney disease in patients with diabetes or hypertension because these strips have increased sensitivity detecting albumin levels as low as 20mg/dL. Early detection can lead to prompt treatment to prevent further kidney damage.

This product was tested in France in 2001. It is available globally.